I’ve talked about the first real cookbook I ever owned - which wasn’t really a cookbook; it was a Betty Crocker recipe booklet called “Soups, Stews, and Chilis.” The highlight was a bunch of award winning chilis from the International Chili Society; after those amazing chilis, though, the rest of the recipes were bland and disappointing. There was one surprising exception - Irish stew. It seemed as bland as the rest of the recipes in the book, with only three ingredients: onions, potatoes, and lamb shoulder. They are layered in the pot, sprinkled with salt and pepper, covered in water, and simmered. No browning, no spices…how boring, right?

I was wrong. Irish Lamb Stew is anything but bland. The ingredient list may be simple, but the bold flavor of lamb and onions combine to make it an interesting stew, with a surprisingly hearty broth.

I thought the stew would adapt well to the pressure cooker, so I googled around to check see what versions were out there. I came across this recipe by Diana Henry. Mrs. Henry is a very popular food writer in England, and a cult favorite here in the States. In her recipe, she explains the importance of the potatoes - they crumble while cooking, thickening the broth with their starch. That explains the extra body in the stew. 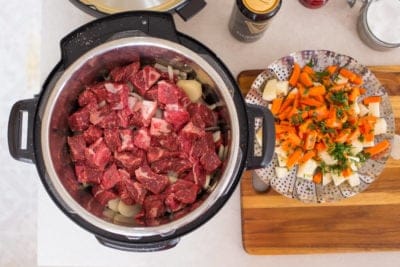 Now, when I say “thickening the broth”, don’t expect something you can stand a spoon in - this is a very thin broth, walking the fine line between soup and stew. In the pressure cooker, because of the sealed environment, most stews come out with thin broths - but the potatoes work their magic, adding body to the liquid.

I also jumped on Mrs. Henry’s suggestion of carrots and thyme - as much as I liked the simplicity of the three ingredient version, I can’t pass up carrots and thyme in a stew. Even better, Mrs. Henry grew up in Northern Ireland - I trust her judgement on what should go in an Irish Stew. 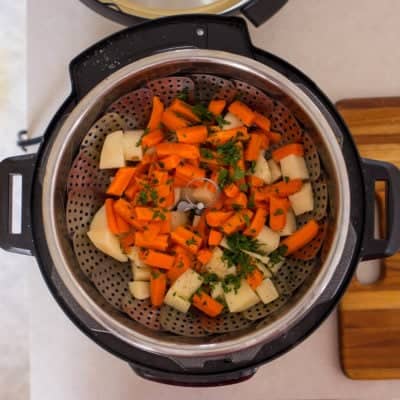 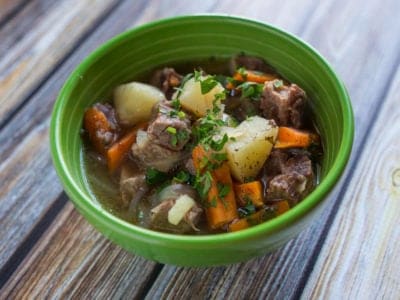