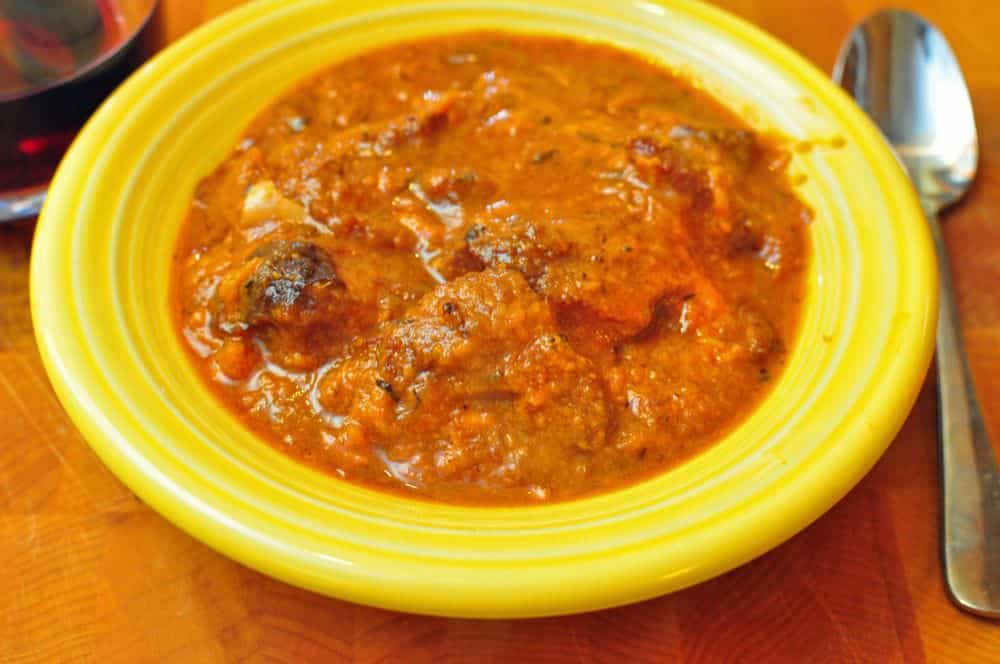 We've been pounded by snowstorms this winter. I'm in the mood for comforting braises. If it seems like I've been working the pressure cooker hard, well...there you go.

. She makes the recipe in a pseudo-pressure cooker, tightly wrapping aluminum foil over a dutch oven. I have a pressure cooker, so I adapted her recipe to work with the real thing.

The first time I made this recipe, it was for my in-laws. Then, a few weeks later, I cooked it for my side of the family. Diane asked for it again this week, to fight the ice storm we were having. Make a recipe three times two months? I never do that; I'm a fickle cook, always moving on to the Next Big Thing. I realized I have a new favorite on my hands.

Why is this recipe so good?  The sweet potatoes and prunes melt completely under pressure.  The result is pork coated with a thick, earthy, and very sweet sauce. This is one of the few stews my kids eat without prompting - they love dipping bread into that sweet sauce.

at bay? Give this one a try.
*Don't have a pressure cooker? That's OK - use Pam's aluminum foil braising technique as described in Lamb Shanks with White Beans.  Or see my notes below...

Directions:
1. Brown the pork: Sprinkle the pork evenly with 2 teaspoon kosher salt. Heat the oil in the pressure cooker over medium-high heat until shimmering. Cook the pork in two to three batches, depending on the size of your pressure cooker. Cook each batch for six minutes total, turning the pork halfway through the cooking time to brown it on two sides. Remove the pork to a bowl with tongs or a slotted spoon, leaving as much fat behind as possible.

2. Saute the aromatics and deglaze the pan: Reduce the heat to medium, then add the onions, garlic, and ½ teaspoon kosher salt to the pressure cooker. Saute the onions and garlic until softened, about 3 minutes, scraping occasionally to release the browned pork bits from the bottom of the pot. Add the tomato paste and thyme, stir, and saute for one minute. Add the flour and stir until the flour looks wet. Add the red wine, and scrape any browned bits from the bottom of the pot.

Variations:
Don't have a pressure cooker? Cook the recipe in a dutch oven. In step 3, instead of pressure cooking on high, bring the pot with all the ingredients to a boil. Then cover the pot and move it to a 350F oven for 2 hours. Remove from the oven, and season to taste.

Notes:
*Serve with the same type of wine you added to the pot, of course.

*This stew is great right after cooking.  But, if you have the time, resting it overnight takes will improve the flavors even more.  After cooking, let the stew cool down, then refrigerate overnight. The next day, scrape the fat cap off the stew and reheat it. Your patience will be rewarded.

*This recipe freezes well; don't worry about making too much. I freeze it in 2 cup containers