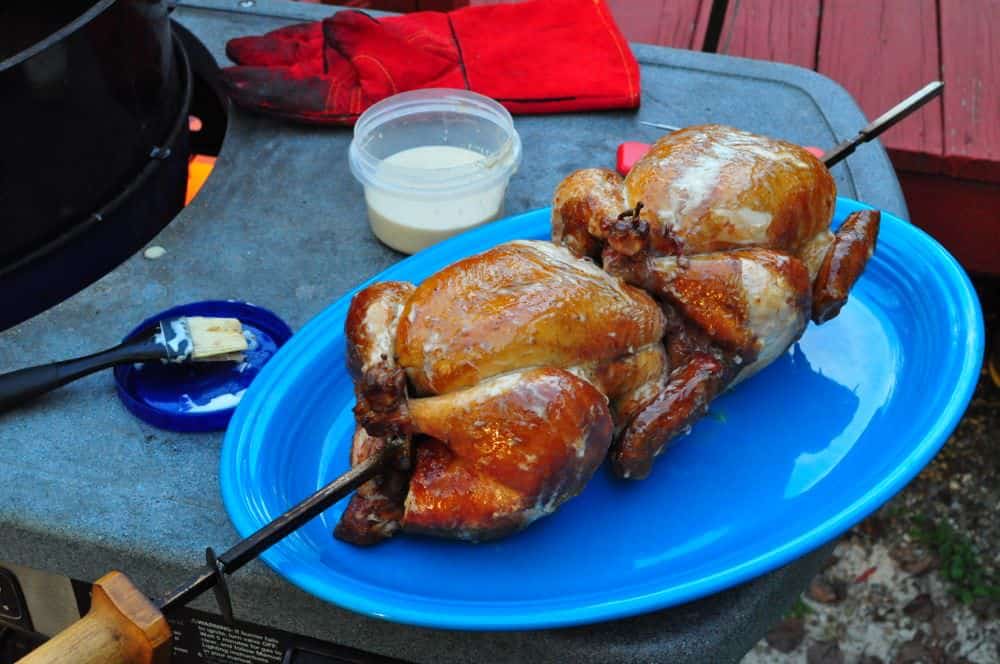 Years ago, in my Weber Smokey Mountain, low and slow barbecue days, I heard a rumor about white barbecue sauce. It was local to Alabama, and Big Bob Gibson's was famous for it. Split chickens were smoked, then dunked in a big tub of white sauce. Who'd ever heard of such a thing? I kept an eye out for a recipe, but for years, there was nothing.

I got my first recipe for White barbecue sauce from Cooks Country magazine, and the secret was…mayonnaise. Huh. Who would have thought it? The recipe tasted great, and I loved the way the white sauce would melt onto the chicken, leaving it with a sweet, spicy glaze. That said, I was suspicious. Cooks Country? They're just a bunch of Northerners, pretending they understand barbecue. They can't have it right, can they?
*As a Northerner who pretends to understand barbecue, I feel like I can judge.

White barbecue sauce may look strange, but it really does taste like a barbecue sauce. The mayonnaise gives it a creamy base, then you get a big hit of vinegar and sweetness, followed by a hint of heat from the spices. It makes a great coating for chicken, and it's good on pork, too.
*I stuck with sugar for the sweetener in my sauce. I haven't had apple juice in the house since the kids grew out of juice boxes.

1. Brine the chicken
Combine the brine ingredients in large container and stir until the salt and sugar dissolve. Submerge the chicken in the brine. Store in the refrigerator for at least one hour, preferably four hours, no longer than eight hours. While the chicken is brining, soak the smoking wood chunk in a bowl of water.

3. Prepare the grill
Prepare the grill for cooking on indirect medium heat (see details My Rotisserie Basic Technique Post. For my Weber kettle, I light a chimney starter ¾ full of charcoal, wait for it to be covered with ash, then pour it in two equal piles on the sides of the grill, and put the drip pan in the middle, between the piles.
*I recommend the Weber Chimney Starter

, because it is larger than most chimney starters. It holds 5 quarts of charcoal, the perfect size for this recipe.

4. Truss and spit the chicken
While the grill is preheating, remove the chicken from the brine and pat dry with paper towels. Fold the wingtips underneath the wings, then truss the chicken. Skewer the chicken on the rotisserie spit, securing it with the spit forks. Let the chicken rest at room temperature until it is time to grill. 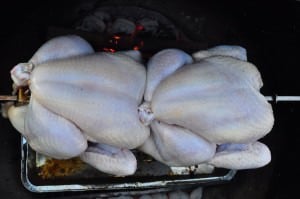 5. Rotisserie cook the chicken
Put the spit on the grill, start the motor spinning, and make sure the drip pan is centered beneath the chicken. Add the smoking wood to the fire, then close the lid and cook until the chicken reaches 160°F in the thickest part of the breast, about 1 hour and 15 minutes. During the last 15 minutes of cooking, brush the chicken with the white barbecue sauce every five minutes. 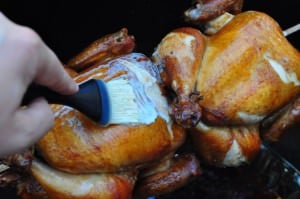 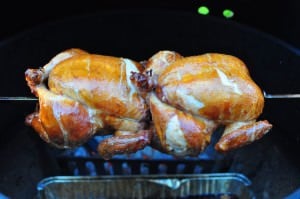