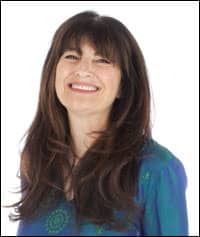 Ruth Reichl is coming to Cleveland!

She is giving a talk at the Cleveland Public Library in downtown Cleveland on Saturday, October 29, 2011 at 2:00 p.m, as part of the library's Writers and Readers series.

Ruth is a food writer, author of seven books, editorial advisor for Gilt Taste, host of Gourmet's Adventures With Ruth and Gourmet's Diary of a Foodie on PBS, and...deep breath...

I love Ruth's books about her life in food - Tender at the Bone, Comfort Me with Apples, and Garlic and Sapphires - chronicles America's food revolution. Ruth had a front row seat as modern American food took shape and gained momentum. She is tightly tied to these stories; her perspective on it is both intimate and fascinating. And her book about her relationship with her mother, Not Becoming My Mother, is equal parts funny, tender, and heart-wrenching.
I am amazed at how open she is in her books. I'm a introvert, a private person at my core. Some of the stuff she talks about? I'd rather have dental surgery without painkillers than share that information.

She was editor-in-chief of Gourmet magazine when the magazine was shut down. This was a tragedy; Ruth's editorial direction made Gourmet THE most important food magazine. Sure, it had great recipes. But it covered food's intersection with sustainability, politics and culture in a way that no other magazine even tries to do any more.
The gossip hound in me can't wait until she writes her next autobiographical book, which will be about her time at Gourmet and its closing. I want her to pull out the long knives. Can you tell I'm still upset that Gourmet is gone?

Well, after all that, my favorite quote from Ruth isn't from one of her books, or from Gourmet magazine. It is a snippet from a radio interview with Terry Gross, on NPR's Fresh Air:

"I mean, if it's 4 o'clock and you're in your office and you haven't figured out what you're having for dinner tonight, the battle's half lost."

That's IT! I said, pounding on my steering wheel. She's got it, the key to home cooking. Have a plan.

Can you tell I'm a Ruth Reichl fan? Stop by and listen to her talk on Saturday, and hopefully you'll become a fan too.