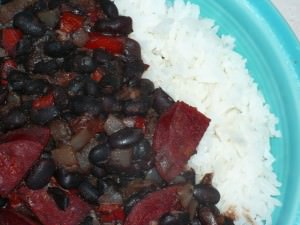 I have three young, picky eaters at home. The book that helped us get through this tragedy is "Child of Mine" by Ellyn Satter

. Her theory is a division of responsibility at the dinner table - a parent's job is to put a healthy meal on the table; the kid's job is to figure out if they're going to eat or not.* And have good table manners while they do it. No whining!
Hint - always serve bread and milk, and they won't starve.

This has worked for us, sort of - we usually don't get into life or death power struggles with a 7 year old over dinner. But, two of my three kids won't eat ANY vegetables, and one of them won't even eat fruit. I keep hoping that they'll come around, like Ellyn says they will, but I haven't seen any evidence of it after five years. So, I've started to try to push "just a taste" of things I think they might actually eat. Of course, this results in the aforementioned life or death power struggles with a 7 year old.
Aargh. I still can't believe it. I was a fruititarian as a kid. My parents made the mistake of leaving me near the box of grapes for a company picnic once; I ate them all. And loved it!

When you combine my multi-cultural cooking style, my picky kids, and this approach, you get...picky eaters across many cultures. They LOVE corn tortillas, white rice, plain spaghetti, and bread. Beyond that, for two of the three...not much else other than cheese and chicken nuggets will pass their lips, unless they can douse it in barbecue sauce.

I mention all this because the idea of black beans and rice came from a recipe in one of Ellyn's follow up books, Secrets of Feeding a Healthy Family

. She mentions it as an example of a kid freindly meal in a different culture. She says that this is what kids all over the caribbean eat as their comfort meal, and that if you can get your kids to try it, they might make it one of their favorite meals. It hasn't worked out that well; only my daughter, the non-picky one, is willing to try it. I think it's the black color - it looks "yucky", or so I've been told.
*Aargh. Again.

It's a good example of how to spruce up the slow cooker bean recipe on a weeknight. Start the beans before you leave for work, then, for dinner, saute some aromatics and sausage, mix in the beans, and you've got a meal! 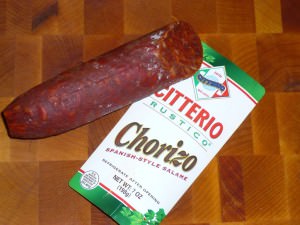 Starch to serve with: 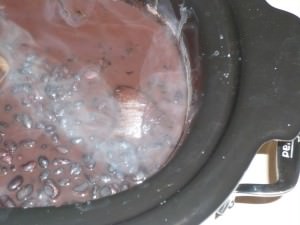 Directions:
1. Cook the beans: (Basic Slow Cooker Beans technique here ) Put the beans in a pot, cover with 2 inches of water, and bring to a boil. Boil for ten minutes, then drain. Transfer the beans to your slow cooker, and add the rest of the beans ingredient list. Cook on low for 8 hours. Remove the onion and bay leaf.

2. Saute the aromatics: After the beans are cooked, Heat the olive oil over medium-high heat in a large dutch oven (6 quarts or larger). Add the chorizo, and cook until just starting to brown, 1-2 minutes. Add the onions, pepper and celery, and cook until semi-translucent and just starting to brown, 3-5 minutes. Make a hole in the center of the onion mix and add the garlic and paprika. Cook 30 sec to 1 minute, or until just fragrant, then stir into the rest of the mix. 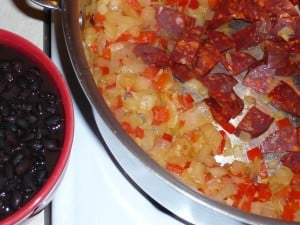 3. Final cooking: Add the beans (and all the bean cooking liquid) to the dutch oven, bring to a simmer, and let simmer for 15-30 minutes. Add the sherry vinegar, citrus zest, and salt and pepper to taste. Serve over the white rice.

Variations:
*Make ahead, easy slow cooker version: Combine steps 1 and 2. Skip the uncooked onion in the beans section; you're using the sauteed onion in step 2 instead. Do step 2 first, and add all the sauteed aromatics to the crock pot with the beans. Cook on low for 8 hours, then move on to step 3, the sherry vinegar and salt and pepper to taste.

*Make ahead, best taste: This recipe tastes best if the beans are made the day before, and allowed to rest in the refrigerator overnight. In the final cooking stage, bring them to a boil before simmering.

*Chicken stock: For a richer taste, drain the beans after they're done cooking, reserving the bean broth. In step 3, pour the beans into the dutch oven, then add 2 cups homemade chicken stock. Then, add the reserved bean broth to just bring the liquid up to the level of the beans. Continue with the rest of the recipe as written.

Notes:
*Add a little fresh orange juice and/or lime juice to the beans with the zest.

*Substitute a smoked ham hock for the chorizo - put it in the slow cooker with the beans when you start cooking them. When the beans are done, remove the ham hock and pull off all the meat you can, shredding it with your fingers, then stir it back into the beans.

Inspired by:
Ellyn Satter - Secrets of Feeding a Healthy Family