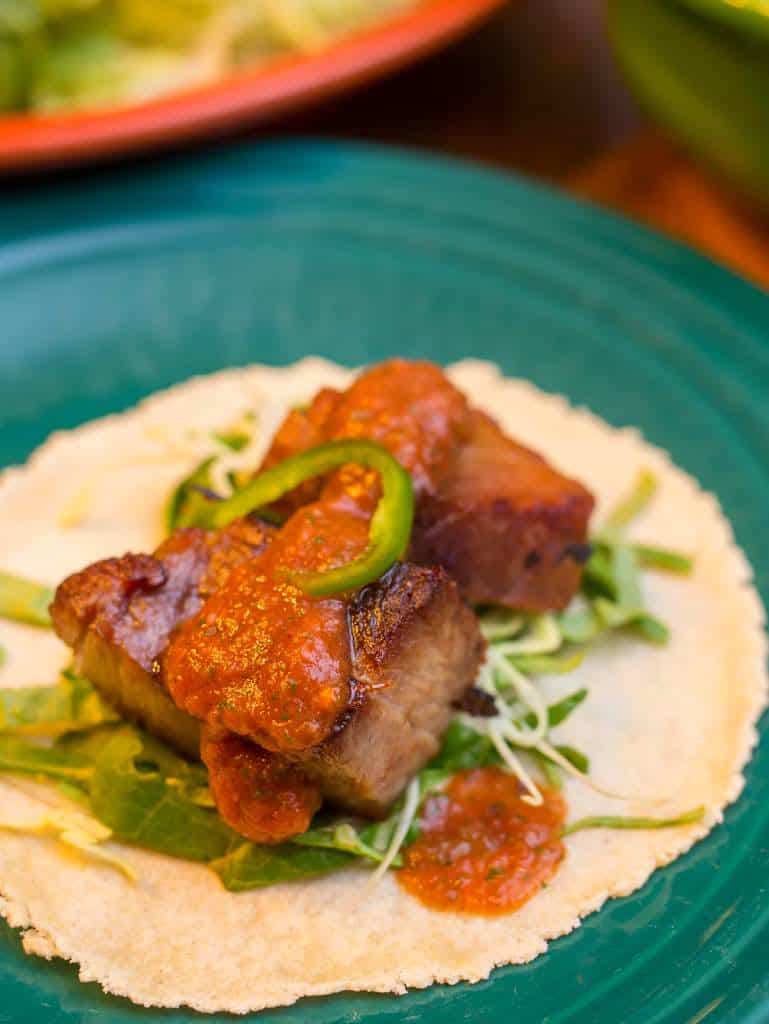 ChefSteps.com's Cooking Sous Vide: Beyond the Basics class has a lot of great ideas. The one that grabbed me was Tough Cuts: Transformed, where the ChefSteps guys sous vide a whole pork shoulder for 24 hours, ice it down, slice it into steaks, and sear the steaks. The long, slow cooking results in pork shoulder steaks with the consistency of pork tenderloin.
Also, check out their amazing Map of Sous Vide Cooking. I'm a habitual map looker, so this is perfect for me.

Pork shoulder is one of my favorite cuts of meat, so I had to try this recipe. But, after the pork shoulder was sealed in the vacuum bag, I had an idea. What if, instead of steaks, I cut the pork into cubes and made carnitas? Light bulb!

In Mexico, carnitas are made by frying cubes of pork shoulder in lard. (Yes, lard.) The pork is simmered in lard until it is golden brown on the outside and meltingly tender on the inside. The ChefSteps technique gives me tender pork; a quick sear gives me golden brown.
Not that I have anything against lard per se, but... wow, I need a LOT of lard if I want to deep fry a pork shoulder.

I upped the heat a bit in my water bath, aiming for a shreddable texture, then plunked in the bagged pork shoulder. 24 hours later, I was ready to go. An ice bath, some slicing and dicing, a quick fry in my cast iron skillet, and I had a taco night that the kids are still raving about.

2. Quick chill the roast, then slice into cubes

Make an ice water bath in a large container - use as much ice as you can, and top off with water. Plunge the bagged pork pork shoulder in the ice water bath for an hour. (This firms up the roast for easier slicing.) Once the roast is cool, remove it from the bag and wipe it with paper towels to remove the layer of congealed gelatin and fat. (The downside to cooling it is the gelatin that is released from the pork will turn into jello). Move the roast to a cutting board, slice the roast into 1 ½ inch cubes, then sprinkle evenly with kosher salt. (I cut it into 2 inch thick steaks, cross-cut the steaks into 2 inch thick strips, and cross-cut the strips into 2 inch cubes.) 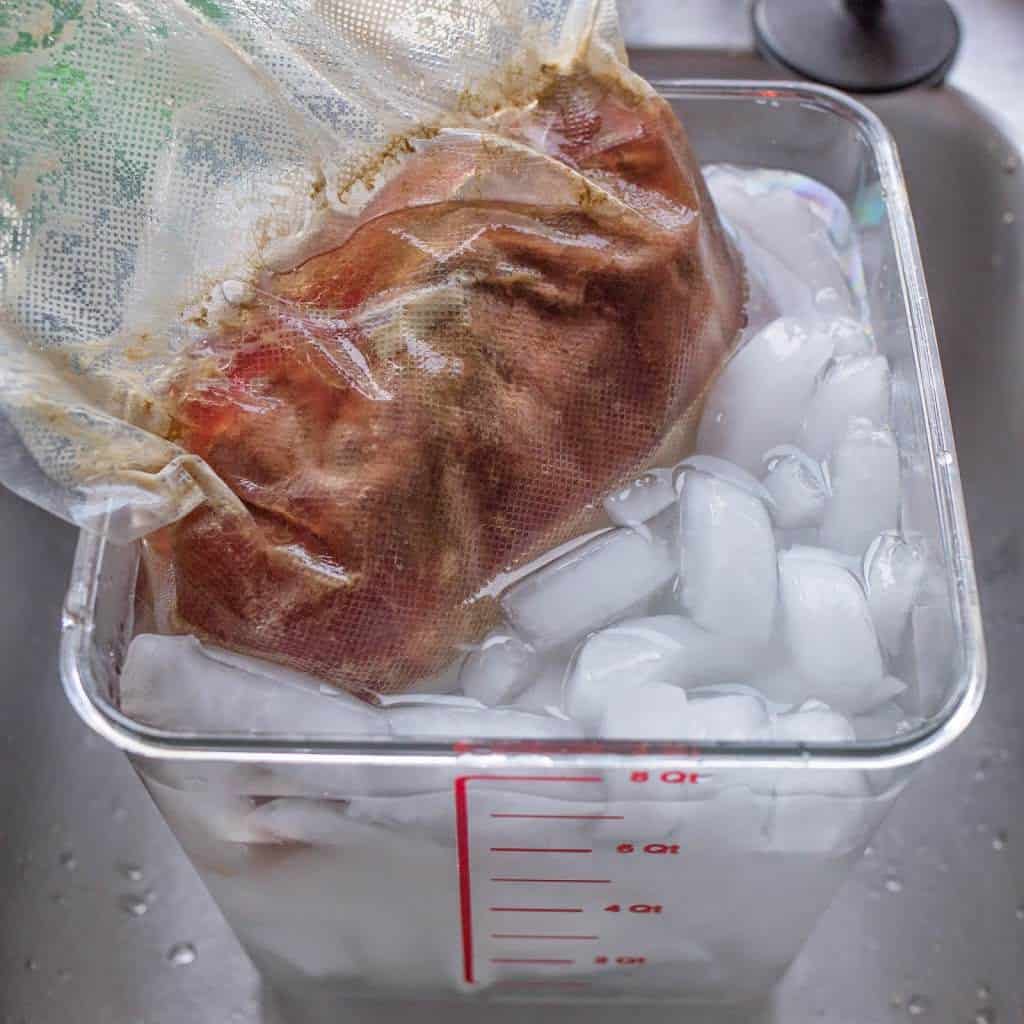 Preheat the skillet over medium-high heat, add the vegetable oil, and wait for the oil to start shimmering. (I preheat my cast iron skillet on medium heat for five minutes, then turn the heat to medium high and add the oil.) Add the pork in a single layer - don’t crowd the pan; sear in two batches if you have to. Sear the pork to well browned on the bottom, about 2 minutes. Flip the pork and sear on the other side until browned, about 2 more minutes. Remove the pork to a platter, leaving behind as much fat as possible. 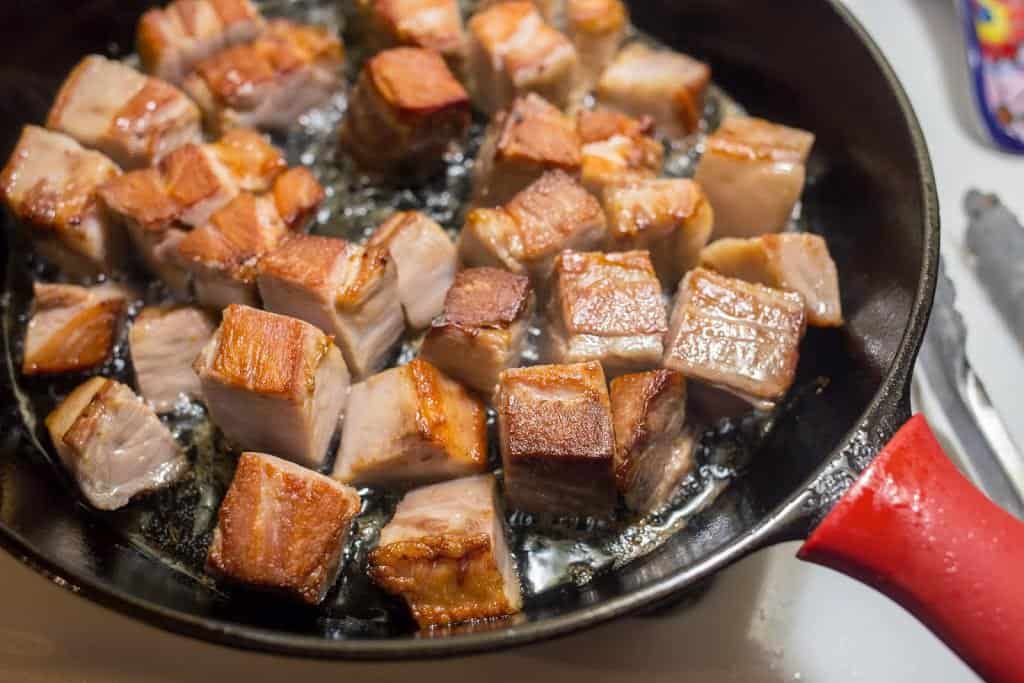