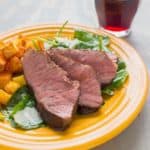 FCC Notice: PolyScience Culinary gave me a Sous Vide immersion circulator to use in my blog posts; this is one of the recipes I used to test it for my review.

Earlier this year, I had a geeky food talk with David Pietranczyk, PolyScience Culinary’s chef. He was manning the PolyScience booth at the IACP Food conference in Chicago, and I had a bunch of questions for him. After a demo a chamber vacuum sealer and a taste test of a chocolate pop from the anti-griddle, I picked his brain about sous vide. Chef David knows more about sous vide than anyone else I’ve talked to, and after twenty minutes. I left with my brain overflowing with information.

One of the things he mentioned that stuck with me wasn’t all that scientific - it was how chef David tailgates for his hometown Chicago Bears. 24 hours before the game, he starts skirt steaks at home with his sous vide circulator. Early the next morning, he transfers them from the sous vide circulator to a beer cooler full of hot water, and leaves for Soldier Field. The tailgate gets going in the parking lot, and he waits for his crew to get hungry. Then he pulls the vacuum packs out of the beer cooler, cuts them open, and sears the steaks for two minutes a side on the grill. What better way to ward off the cold Lake Michigan wind than with a steak?

So, why sous vide a steak overnight? Because it tenderizes tougher cuts of meat. It’s like cooking a pot roast, or a low-and-slow barbecue - the extra time at low heat breaks down the collagen in the meat, turning it into gelatin. The result turns tough cuts of meat into meltingly tender steaks - they’re still solid enough to grill, but they’re as tender as a pot roast.

I wanted to test this out with a skirt steak, like chef David recommends, but they’re tough to find in my local grocery store. So, I used flat iron steak, my favorite cheap steak. Flat iron steak is cut from the chuck blade roast - the shoulder of the cow. That’s right, this is a piece of a chuck roast. It grills well on its own, but after a day tenderizing in the sous vide, it cuts like filet mignon.

I’m going to use this recipe again for tailgating later this year - go Browns! - but today it was a weeknight dinner, sliced and served on top of a baby kale salad. If you can plan ahead enough to throw a steak in the sous vide the night before dinner, I highly recommend this technique with a flat iron steak.

Don't want to start the day before? An hour in the Sous Vide water bath is enough to cook the steak to medium. It won't be as tender as the 24 hour version, but flat iron makes a good, inexpensive steak even without the long cooking time.

My local grocery store, Acme, stocks Certified Angus Beef flat iron steaks in cryovac packaging, so I can grab one of these whenever I need them. If you can’t find flat iron steaks, ask your butcher for chuck blade steaks; it’s the same cut, but they’re sliced crosswise instead of along the grain.

This technique works great with skirt steak, as chef David recommends; it’s also good with flank steak, flap steak, or other slightly tough steaks that you cut against the grain to make tender. I wouldn’t use it with loin steaks - New York strip, ribeye, tenderloin - because they don’t have much connective tissue, and would dry out in the long cooking time. For loin steaks, go with a 1 to 4 hour max cooking time in the sous vide.

The cubes you see in the picture are Spanish style fried potatoes. I'm a sucker for a steak and potato dinner, especially if I can convince myself it's healthy by serving a kale salad.

Large, heavy frypan (I used my 12 inch All-Clad; cast iron is also good for this.)