In the back of my mind, I was worried. I was having fun with my Sous Vide experiments, playing with different temperatures and vacuum sealers - but I didn’t know if any of my readers were interested. Boy, was I wrong - those posts generated a bunch of questions.
*Shameless plug: voting opens for the SousVide Supreme Summer BBQ Contest next week. I’ll be begging asking for your vote.
** If I am boring you with all this Sous Vide cooking, I apologize. I’m having fun. I have a couple more recipes ready to post, so hang in there - I’ll have some non-sous-vide posts soon.

What does a cross section of 140°F Sous Vide chicken look like? 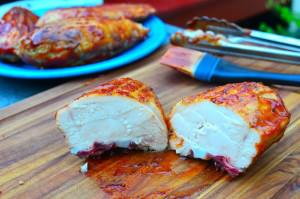 Bone in, skin on chicken breast cooked for two hours at 140°F, and seared for 4 minutes over high heat on the grill, flipped and brushed with barbecue sauce every minute while searing.

Why use the grill? Why not sear in a pan? Don’t want to lose that perfectly cooked interior…

Sure, a ripping hot pan will work. I have good luck with the grill. I preheat for 15 minutes, then sear for 4 minutes, flipping every minute and rotating halfway through to get a crosshatch of grill marks. The constant flipping keeps it from cooking on the inside.

Charcoal is even better. I light a chimney full and pack it in on one side of my grill, in a pile two coals deep. That’s real heat - it sears in a minute a side.

*A related tip from Modernist Cuisine at Home, thanks to reader JC. After sous vide cooking to the desired temperature, put the vacuum bag in a ice water bath to cool it down. That way, the exterior is cold before it hits the grill, making it even harder to overcook.

I love 60°C/140°F eggs, but they were too runny for everyone else in my family. I kept bumping the temperature up, as high as 64°C/146°F, but the albumen never set, while the yolk was starting to firm up. It sounds like I need to sous vide, then poach…but that’s a test for another day. And, while it may not satisfy anyone else in my house, I love a couple of 60°C eggs on top of a spring mix salad. The egg falls apart and merges with the dressing…it’s just amazing.

Can you compare the SousVide Supreme to a DorkFood DSV? SideKIC? PolyScience Immersion Circulator?

I haven’t tried any other Sous Vide cookers. My only point of comparison is my beer cooler sous vide setup.
What I can say is: I have a loaner from the company, and I don’t want to send it back. I’m enjoying the SousVide Supreme. Simple, easy to clean, reliable temperature control, in a all-in-one package. If I don’t win the contest, I’ll buy one with my own money. Did I mention the contest? Vote for me next week?

I love braised short ribs, and I love grilled, thin cut short ribs. Sous vide cooking lets me combine the two, but the suggested cooking times went from 24 to 72 hours in the water bath. Which one should I use?
Why not all three? Three days ahead of time I set the water to 140°F. Then I dropped a bag of short ribs in the cooker every 24 hours, giving me a range of cooking times. How did it turn out?

After doing this test, I noticed Michael Ruhlman’s recipe on the SousVide Supreme website. Sure enough, his BBQ Short Ribs cooked for 48 hours.

So, here’s the recipe. This may be the simplest thing I’ve ever posted, if you have the equipment for Sous Vide. It has three ingredients, if you count salt and pepper as two of the ingredients. Simple doesn't meant bland - these ribs are overwhelmingly beefy.

Sprinkle the ribs evenly with the salt and pepper. Put the ribs in a small (quart) vacuum pouch. Vacuum seal the bag and sous vide at 140°F/60°C for 48 hours.

Set the grill up for cooking on direct high heat, and clean the grill grate. For my gas grill, I preheat with all the burners on high for 15 minutes, then brush the grate clean with my grill brush.

Remove the ribs from the bag, and pat dry with paper towels. Put the ribs on the grill over direct high heat. Sear, turning to a new side every minute or two, until the ribs are well browned on all sides, about 4 minutes total. Serve. 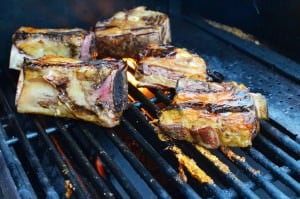