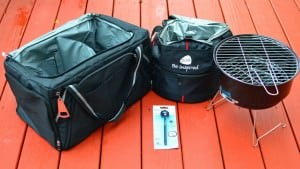 This post is sponsored by the National Pork Board as part of the Tailgating with Pork and Kroger Program. Score big at your next tailgate party with Kroger - from tailgating to backyard BBQs, game day gatherings with friends and family can be simply delicious with juicy, tender and versatile pork - the MVP of championship-worthy spreads this fall season.

The National Pork Board and Kroger sponsored my tailgate! I loaded up on beer, snacks, and pork at Kroger, spent Saturday afternoon skewering kebabs, and left for the Cleveland Muni lot really early in the morning to tailgate with my brothers and some friends.
This was Ben’s first trip to a live Browns game, and his first exposure to the Muni lot crowd. It’s…um….quite a slice of humanity. We got to the lot at 7AM. I still needed my thermos of coffee, but some of our fellow tailgaters had moved on to harder beverages already.

My brother Pat (the lawyer) fired up my Weber Q and started breakfast - breakfast burritos with sausage and brats were on tap (Ben went with a breakfast bratwurst wrapped in a tortilla - he’s only twelve, and he’s a natural tailgater). We threw the football around, debated our chances for the day (surprisingly optimistic, considering we’re a bunch of Browns fans), and watched the real die-hards stream by. I’m a huge Browns fan. I live and die by their results on Sundays - die, usually - but I felt like an amateur compared to some of the fans.
Favorite Ben quote of the day: “Dad! Some of these people are drunk! Are you drunk?” No son, I’m not. It’s only 9AM. But, let’s see how the game goes this afternoon. I may need to drown my sorrows.

We know our own strengths, though - we aren't amateurs when it comes to food. My brother Matt (the doctor) has been organizing us for years at Ohio State and Notre Dame tailgates. While Pat worked on breakfast, his friend Ricco and I got the Weber Kettle set up with the rotisserie and started a long-cooking shoulder roast. Then we relaxed, had a beverage or two, and waited for Pat to finish breakfast.
Pat invited a big crowd, and it took a while for two cast iron skillets to heat up on the Weber Q. But it was worth it - the breakfast burritos were fabulous.

After breakfast came more football tossing, another beverage, and then it was my turn at the grill. The pork shoulder kebabs worked perfectly. They’re relaxing to cook - pork shoulder can always grill a little longer, which is good when I get distracted by, say, educating Ben on the history of Browns quarterbacks.
In my lifetime: Bernie Kosar, Brian Sipe, and then a string of has-beens and never-weres. 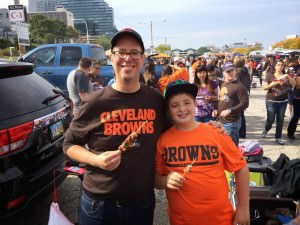 Kebabs come with a built in handle - easy to grab and eat. And there are even some vegetables wedged in there between the pork cubes. Vegetables - that means it’s healthy, right? When the kebab is done, the bamboo skewer goes in the garbage bag. After a few skewers of pork, it’s time for another beverage. Maybe this one should be a bottle of water - don’t want to get dehydrated and burn out too early.

Reminder: the National Pork Board and Kroger are still hosting their Pin to Win contest - go to the Tailgating with Pork and Kroger pinterest board, repin a recipe from the board. Like, say, my pork shoulder kebabs recipe? I’m sad to say it has not been repinned, not even once. I feel so unloved. OK, I’m over myself. If you repin a recipe (even if it’s not mine), you’re in the running to win a $250 Kroger gift card. The rules are pinned here. Now, back to our original commercial from this commercial break…

Game time! We loaded our coolers into the van, folded up the Weber Q grill, and joined the sea of bodies heading towards the stadium. Ben joined in the “Here we go Brownies, Woof Woof!” chants, and I worried about some of the other language he was learning when a (pick one: brave/oblivious/suicidal) Bengals fan was spotted.

Shock of shocks - the Browns won! Whohoo! And, while we were stuck in traffic, waiting to leave the parking lot, we listened to the Indians secure a spot in the playoffs for the first time since 2007. I don’t know how to deal with success as a sports fan, really I don’t.
I try to live in the moment, and enjoy a victory. But in the back of my head is the voice that says: If they win today, it’s only because it will hurt more when they lose tomorrow.

So, that’s my tailgating experience. To help you join in the tailgating fun, it is time for the giveaway! The National Pork Board and Kroger grocery stores gave me a tailgating party kit to give to one of my lucky readers.

The kit consists of: 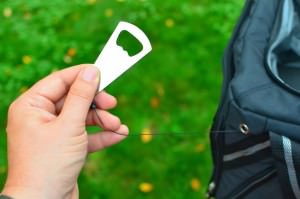 A big help for the big roast. (It was huge, and took a lot longer than we thought it would to cook.) 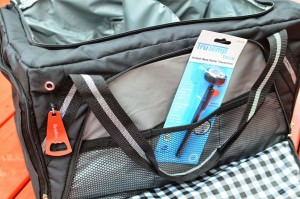 Comes with its own carrying case. It’s cute. And tiny. I have to admit - I left this mini-grill at home. I just bought a Weber Q for tailgating, and I wanted to play with my new toy. 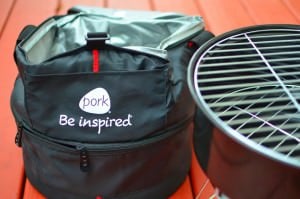 Leave a comment on my blog, telling us about your favorite tailgating experience.
Note: on the blog, please. If you’re reading this on Facebook, Twitter, Google+, or some new social media that I’m too old to have heard of, please click through on the attached link to DadCooksDinner.com to enter.

One entry per person, and please make sure there is some way I can get in touch with you through the comment - if I can’t contact you to find out where to ship the prize, you can’t win. The comment has to be in the “Tailgating Party Kit Giveaway” post on DadCooksDinner.com.

Emails, entries on my Facebook page, retweets, and illuminated manuscripts rolled up and stuffed in my mailbox will not be considered for the drawing. Only entries from North America will be accepted.

Entries will be closed at 9PM EST on Sunday, October 6th, and I will randomly select the winner at that point. The winner will be announced Monday the 7th. If I am unable to contact the winner by Wednesday the 9th, I will pick a new winner.