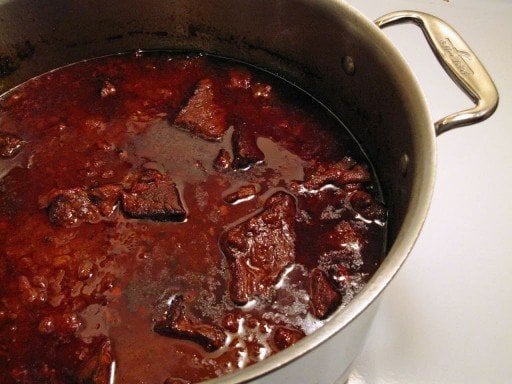 The first cookbook I bought after Diane and I got married wasn’t really a cookbook. It was a recipe booklet from Betty Crocker, the ones they sell in the checkout aisle at the grocery store. Soups, Stews and Chilis was full of very bland recipes, except… In the middle was an insert. In that insert were the recipes that won the International Chili Society cook off between 1989 and 1993. Those recipes were another step on my way to becoming DadCooksDinner.
In Ohio, in 1994, it was a revolutionary concept to make chili Texas style, with big chunks of beef and without beans. And the flavor! A half cup of chili powder! This was a culinary revelation.

.  I’m so far from being a Texan that I’m approaching it from the other side. 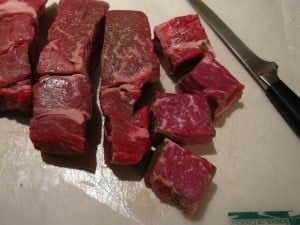 Over the years, I’ve brought it to potluck lunches at work, tailgating at Ohio State, family gatherings, and countless Super Bowl parties. All of my younger brother’s friends know this recipe. My parents hold a Super Bowl party every year, and my brothers would invite their friends from college over. The starving college students would descend on the pot like locusts.  Nowadays, they’re all successful professionals. But they still come to the super bowl party, and they still clean out the pot.

This recipe started my Chili Fest tradition at work. Someone suggested a chili cook-off among us computer programmers, and I brought in a crock pot full of my Texas Red All-Beef Chili.
I still had to explain the “all beef” thing back then. 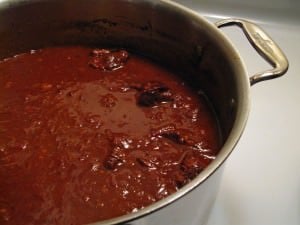 Added the masa harina and simmered to thicken

It was so popular, people started asking when I could bring it in again. I couldn’t make enough chili to feed everyone, so I sent out an email asking for other people to bring in some chili, and we’d make a lunch of it. We’ve been doing our Chili Fest every fall for the last eight years, and last time I had volunteers bringing in twelve different types of chili, other main courses, side dishes, and desserts.  Chili just brings people together. Today is this year’s Chili Fest, and I’m publishing the recipe in its honor.
This will also give me something to point people to when they ask for the recipe.

A bowl of Texas Red. Chili with big chunks of beef, the way Texas wants it. 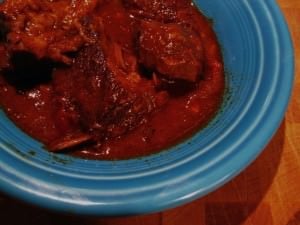 A bowl of red

Notes:
*Fond is the browned bits of meat and vegetables that stick to the bottom of the pan.  It is the basis of flavor in most stews and chilis.  The more fond you have, the more flavor you get in the chili when it dissolves into the cooking liquid.  Because of this, do not brown the meat for your chili in a nonstick pan!  You want the sticking, because that’s how you build a good fond, and that’s how you build flavor.  In this recipe we’re doing it twice; once when you brown the beef, and once when you’re sauteing the onions and spices.

*Browning three batches of beef in your pot can take a while, and lead to burning the fond on the bottom of your pan.  You can speed up this step by browning some batches of beef in a separate skillet.  When you’re done, put the water (or stock) in that skillet, bring it to a simmer, and scrape the browned fond off the bottom. You don’t want to lose any of the browned bits – they’re all flavor.  Add this water from the skillet when you would add it in the recipe. 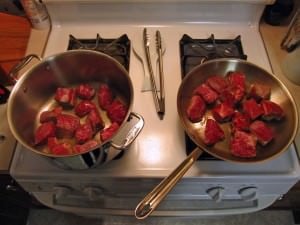 Double burner browning
*The masa harina slurry is optional, but it helps thicken up the chili.

If you want to reduce the heat, you can halve the jalapenos and chipotles, or omit one or the other.
Or just skip the peppers all together.  But this IS Texas chili…why are you making the recipe if you can’t take the heat?

You didn’t hear it from me, but you can add up to four cups of kidney or pinto beans to this chili.  Just don’t use the name Texas in the title if you do that.  And I’ll claim I’ve never met you before in my life.
The chili police are relentless, and very specific…no beans allowed.
**Of course, some true believers are going to be after me for adding tomatoes.  I’m not a number!  I’m a free man!

If you really want to go all out, use bacon fat instead of the vegetable oil.  If you really want to do it right, start the recipe by cooking 8 pieces of bacon. Reserve the fat, use it for the cooking, and mince the bacon and sprinkle it on as a garnish when you serve.

I usually make this recipe for a crowd – if you want to scale it back (serving 6-8), cut back to 3 pounds of beef, and halve the rest of the ingredients.

What do you think?  Questions?  Other ideas?  Leave them in the comments section below.