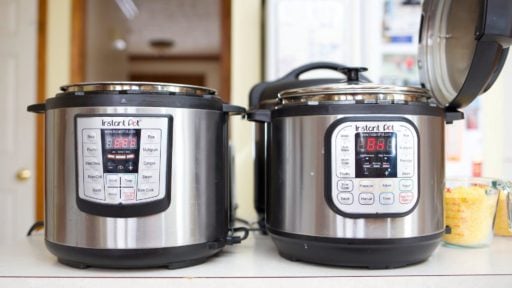 A few months back, I threw a question out to my readers: are you using your Instant Pot as a slow cooker? Is it working for you?

When is Low too Low?

The answers I got back were...not encouraging. It's working for some of the commenters, but most people are having problems with it. The most useful tip was:

Using those settings, I tested my Instant Pot Duo 6 quart and 8 quart models with my favorite Slow Cooker Shredded Pork recipe, and the non-pressure lid. I got good results in Medium=Low and High=High modes, so it can work as a slow cooker for some recipes.

But...there were still a lot of comments (and I mean a LOT of comments) about slow cooking failures in the pot. So many that I couldn't just say "hey, it works for me" - it's obviously not working for the majority of my readers. (Or, at least the ones who left comments).

My theory about the problem: slow cookers and Instant Pots heat differently. A slow cooker's heater is on the bottom and comes up the sides, and the heavy, ceramic slow cooker crock soaks up the heat and spreads it out in all directions. In an Instant Pot (and every other electric "multi-cooker" style pressure cooker I have seen) has a heater on the bottom. And, the thin metal pot does not spread out the heat. This works fine for pressure cooking, where the heat comes from the pressurized steam trapped in the pot - but not so well for slow cooking.

A few commenters contacted Instant Pot, and were told that you need 1.5 to 2 cups of liquid in the cooker for it to work as a slow cooker. I think this helps spread out the heat - the water heats up the entire cooking pot. But, it doesn't work for recipes that are thick, or don't use much water.

Does this mean my Instant Pot is a failure? No, of course not. I bought it as a pressure cooker, and I love it. I've owned an Instant Pot of some sort for going on six years, and since I got my Instant Pot, my slow cooker has been gathering dust. My biggest use of the slow cooker was for potlucks - using it as a warming dish, essentially. Nowadays, when I take a pot of chili to a potluck, I bring it in the Instant Pot. I reheat with Saute mode, then set it to Keep Warm until it is time to serve. I have to stir more - I don't want to scorch the chili on the bottom of the pot - but it does the job well.

Thank you for the feedback!

Special Thanks to everyone who left a comment on the original post. I wouldn't have been able to figure this out without your help!

If you want to see the (quite extensive) list of complaints about Instant Pot slow cooking, check out the original post:

Enjoyed this post? Want to help out DadCooksDinner? Subscribe via eMail or RSS reader, recommend DadCooksDinner to your friends, and buy something from Amazon.com through the links on this site. Thank you!