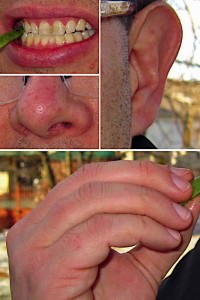 Using Five Senses in the Kitchen

A few days ago I was making a stir fry for dinner. A pot of rice was on the stove, and I was busy chopping vegetables. I wasn't watching the pot of simmering rice. Once the water boils down to the top of the rice, I am supposed to lower the heat and put the lid on the pot. I missed see it; I was busy working on the vegetables. Luckily, something made me stop chopping. The sound of the boiling had shifted. It was higher pitched, and it sounded like a smaller amount of water was boiling. I wasn't actively listening for this, but "The rice doesn't sound right" popped into my head. I checked on the rice, turned down the heat, and dinner was saved.

This made me think: How do I use my senses when I cook? I've spent enough time in the kitchen to be aware of what's going on around me when I'm cooking. I'm not just using my sense of sight, or my sense of taste. While I work on the task directly in front of me, I also pay attention for other clues. I'm using all my senses, all the time.
*I think this is part of why I love cooking - when I'm doing it, I get pulled into the work. It helps me relax at the end of the day. And I get to eat the results.

Sound: I was surprised at how many different ways I use sound in the kitchen. The sound of cooking changes as it goes along, giving you clues to its different stages. Browning meat, for example. When the meat first goes in the pan, there should be a quick, ripping sizzle, or the pan wasn't hot enough. Then it quiets down to a bubbling sizzle. After cooking for a while, the meat starts to develop the crispy brown crust I'm looking for. The sound of the searing gets sharper, with a hint of crackle that wasn't there earlier. That sound has saved me any number of times.
*Another example: When I'm grilling with the lid closed, I'm listening for the difference between the sizzle of the occasional drop of fat hitting the coals, and the constant flaring of a grease fire. If I can catch it at that point, I can open the lid and move things around, and stop the fire before it gets started.  If not, I start to see black smoke coming out of the grill...and it is too late.

Touch: The best way to tell if something is done is to touch it:

And, as I said in my Kosher salt post, I can judge a half teaspoon of salt the feel of it in my fingers.
*This is why food fanatics like me have such atrocious table manners. We're always poking, prodding, and picking up our food with our hands. We can't help ourselves. Sorry, Mom.

Sight: Is it browned enough?  I'm watching for that moment of golden, brown, and delicious success that comes just before a black, burnt failure. Also, I can see the line of cooked protein working its way up the side of a raw piece of meat; then I see juices start to pool on the top of the meat. Time to flip it!  When heating oil in a pan, it is hot enough to start cooking when the oil is shimmering.

Sorting black beans requires a soft focus. I'm trying to find a dark brown clod of dirt that's the same size as a black bean...and that dirt is surrounded by beans that look almost exactly like it. As I move the beans around, I'm looking for something that "just doesn't seem right."  When I get that feeling, I look very closely at the beans in that area...and I find some dirt.

Smell: Smell is a critical piece of how food tastes. The tongue detects four flavors - salty, sweet, bitter, sour. (You can add the sensation of heat from capsaicin, and umami, the taste of fatty or rich that was recently discovered). However, the human nose senses hundreds of different smells, in tiny amounts. A combination of both taste and smell creates what we think of as the taste of food.
*This is why food tastes so bland with a stuffed up nose. And, take my word for it - don't go to a wine tasting with a head cold. It becomes very expensive grape juice.

While I'm cooking, my sense of smell also serves as an early warning system. Things usually smell great right before they burn. If I smell something delicious, it's a sign that the food is just about done. This is particularly true with my beloved steam-saute technique. If I can smell the vegetables, the water has boiled off, and they're starting to brown. Get them off the stove now!

Taste: Taste as you go! Season to taste! In the end, cooking is all about how things taste. It's obvious, I know.  But if I don't taste while I'm cooking, and season to taste when I'm done, then I'm flying blind and hoping for the best.
*To paraphrase Julia Child, any mistake in the kitchen can be fixed, except for a fallen souffle. But if I don't taste it, I won't know it needs to be fixed.

How do you use your five senses when you're cooking? Anything I missed? Talk about them in the comments section below.