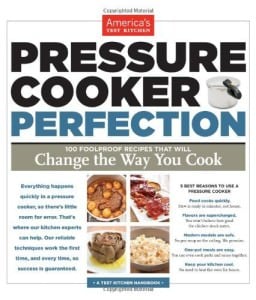 I’ve been waiting for this book for ten years. I’m a loyal Cook’s Illustrated subscriber, and I bought my first pressure cooker in 2003, based on their review. Cook’s trickled out a pressure cooker recipes over the years, but not that many. I wanted to see what Cook’s ultra-analytical style would bring to pressure cooking.

But that title - perfection? That's a strong claim. I know it was probably the editor, unable to resist the alliterative P in the title. But still. And then the introduction made me sit up:

In the many months of testing, we did come across an interesting fact. Almost all the times listed for basic pressure cooker recipes (vegetables, grains, etc.) were incorrect. We spent weeks testing the basics, getting the timing right, and we have included reliable charts so that you can use the pressure cooker as a useful cooking tool day in and day out.

Was this it? The book I’ve been waiting for?

Now that I have it in my hands, I’m disappointed. I believe them when they said they took months to test all the recipes. It’s what they do. But…

The Good, The Bad, and The Weird. A three part review of Pressure Cooking Perfection.

The Bad: Confusing the pressure indicator with high pressure.

The Fagor Duo is their best buy pressure cooker. It is on the cover, and in all the pictures in the book. (They have a different “best” cooker, but you never see it other than in their equipment review section.) I owned a Duo for years, and it’s a great cooker; I passed it on to a friend, and she’s still using it.

But the Duo doesn’t work the way the book says.

Some pots have a knob that you turn to low or high (called 1 or I and 2 or II on some pots), which allows you to indicate your target pressure level before you start to bring the pot up to pressure. The pressure indicator will rise when that pressure level has been reached. [Emphasis mine]

For comparison, here’s what the Fagor manual says about coming up to pressure:

When the pressure indicator has risen and steam starts to come out of the operating valve for first time [Emphasis mine], lower the heat to maintain a gentle, steady stream of steam. At this moment, the COOKING TIME STARTS and you have to start timing you [sic] recipe. 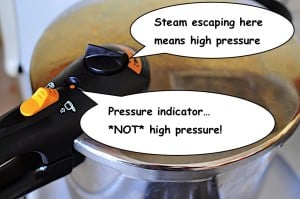 They do get it right with “other pots” - on some cookers, like my Kuhn Rikon, the pressure indicator doesn’t work like an on/off switch. It slowly rises, and the indicator has markings for low and high pressure.

Why am I so worried about this? Recipe timing is critical with pressure cooker recipes, because the lid locks once it comes up to pressure. (Which is what the pressure indicator actually shows - that the cooker is locked.) Once the lid locks, you have to trust the recipe's timing.

The Fagor looks like the cooker they used, from all the pictures in the book. And they’re starting their timer before the pot is up to high pressure, according to Fagor’s own manual. Less than a dozen pages in, and I’m suspicious of all the timings in the book.

That quote from the introduction, about "incorrect times”? There’s a reason their times don’t match anyone else’s - and it’s not because everyone else is wrong.

And then? They make the same mistake with electric pressure cookers.

There is a lag between the time the electric pots come up to pressure and when the timer starts, which led to overcooked food when preparing recipes with short cooking times.

Again - electric pots do know when they are at high pressure. They have sensors that detect when the pot has reached high pressure and start their timer. The book is making the same mistake, confusing the pressure indicator with reaching high pressure.

I went from thrilled to have the book to highly suspicious of their results…and I hadn’t reached the first recipe yet.

The Weird: Dried bean timings - so short they look like misprints

Then I got the next curveball - the bean cooking times were short. Really, really short. According to their table, soaked pinto beans should cook for three minutes at high pressure, with a natural pressure release. Garbanzo beans and kidney beans? Five minutes.
And, after their pressure indicator issue, I assumed the timings would be extra long, not short.

Every other pressure cookbook says it should take ten to twelve minutes to cook soaked beans at high pressure. (Including the manuals that came with the cookers). My experience is it’s more like fifteen minutes. Maybe twenty with a batch of older beans.

Why the different times? Pressure Cooking Perfection calls for 4 quarts (16 cups) of water to cook 1 pound of beans. Other pressure cooking cookbooks (and the manuals that came with my pressure cookers) call for 6 to 8 cups of water. That’s a whole lot of extra water. Maybe they figured out how to deal with older beans, and had better results with more water?

I tested this technique with pinto beans (because I had a big bag in the pantry). I followed their soaking instructions: dissolve 2 tablespoons of salt in 4 quarts of water, then soak one pound of beans overnight. I cooked the beans at high pressure for 3 minutes, let the pressure release naturally for 15 minutes, then quick released the rest.

And the beans? I have to admit - I went into the test with bias in my heart. I was sure three minutes under pressure wouldn't cook the beans. But, much to my surprise, the beans turned out OK.

I had some tough floaters, like I always do when I buy a bag of beans from my grocery store. The rest of the beans were cooked properly. Maybe a little on the underdone side, but not bad.

But, the beans tasted watery; the bean cooking liquid was diluted by all the extra water. The “old way” beans tasted better.
Both batches of beans were brined and drained; the only difference was the amount of water used to cook them.

The other problem with this technique: too much water for a smaller cooker. 1 pound (2 ½ cups) of beans plus 4 quarts of water takes a 6 quart pressure cooker over the “max fill” line - you can only use their technique with a 8 quart or larger cooker.

So, beans were inconclusive - much to my surprise, their method worked. But it seemed like change for change’s sake; it didn’t actually improve the beans.

Note: I emailed America's Test Kitchen, asking if the bean timings were misprints. They never responded. The rest of the book's timing charts, for meat and vegetables, look reasonable. A little on the long side, but that’s what I expected with the pressure indicator issue.

[Update 2013-04-09: An editor from Cooks Illustrated contacted me, and forwarded my question on to the book department. Stay tuned for what they have to say.]

The Good: Finally, the recipes

By this point, I was prepared for disappointment. Then the book surprised me again. But this time, it was a good surprise.

The book is full of solid recipes. The timings all look good - maybe a little on the long side, but not completely out of range with my own findings.

The following recipes went on my “must make for dinner" list:

The pressure cooker pasta technique is a winner. They suggest cooking pasta like risotto, with just enough water to cook the noodles. This makes Macaroni and Cheese a one pot meal - no separate boiling step, just stir in the milk and cheese once the noodles are cooked.
My version of their recipe for Mac and Cheese is coming Thursday.

Luckily, recipes with dried beans ignore the bean timing chart and the massive amounts of water. Chickpea Tagine cooks for 25 minutes at high pressure, not the 5 minutes suggested in the chart. Cuban black beans also take 25 minutes under pressure, with a natural pressure release, and some extra simmering at the end.

All the recipes I've tried have worked well. I think their testing time was spent working on the recipes, and it shows.

So, what does it all mean?

I wanted to love this cookbook, I really did. But I was disappointed. I have a lot of respect for Cooks Illustrated; they taught me a lot of what I know about cooking. This book doesn’t live up to their standards.

If you’re new to pressure cooking, don’t start with this book - you need a better basic reference. Get either Lorna Sass or Miss Vickie for your first pressure cooking book. This one is good for later, once you know how to use your pressure cooker, and need some new recipe ideas.

*FCC Disclosure - I did not receive any compensation for this post, and purchased Pressure Cooking Perfection with my own money. If you buy a copy through my Amazon links, or anything else for that matter, I get a small sales commission. Thank you!