My wife’s family is coming over for Easter. And my wife, the ham fanatic, insisted on a double smoked ham from Sherman Provision.

Lucky for her, I ordered two - one for Easter dinner, and another for this blog post. One of the weird side effects to blogging is you get two holiday meals - the actual holiday, and the one you cook a few weeks ahead of time for the blog.
This is a problem when the recipe doesn't quite work and I have to cook it a few times to get it right. "Daaad, do we haave to have Thanksgiving turkey agaaain?"

This time I got it right. My wife and kids started circling as I brought the glistening ham in from the grill. I had to beat them back with my grill spatula to get the pictures for this post - they kept trying to pick pieces of the crust off while I was setting up the camera. Once I had my pictures, I started carving, and for a while I couldn’t keep up with them. About a quarter of the ham disappeared from the cutting board before I put the knife down and asked if we could actually sit down to eat. They slunk off and set the table.
When I turned my back, my wife grabbed another piece of ham.

So, here is my easy grilled ham, glazed with honey, bourbon, and mustard. Cook it low and slow until the ham is reheated, brush it with a few layers of glaze, then carve and serve. 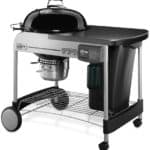 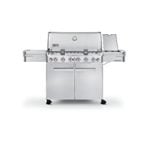