Jump to Recipe
I was looking for another rotisserie recipe idea. And what should appear in my mailbox? Cooks Country magazine, and my weekly Acme Grocery flyer. In the former was a recipe for grill-roasted ham, in which they recommend you use two skewers to turn the ham like a rotisserie while it cooks. In the latter was a sale for ham, $0.89 a pound as their Easter special.* It was fate!
*I know that ham is the traditional Easter meal for a lot of people. Growing up, we always had ham sandwiches on rye at Grandma's house. Now that I'm a food snob, I'd rather cook Lamb for my Easter dinner.**But for $0.89 a pound, I wasn't going to turn down the ham! 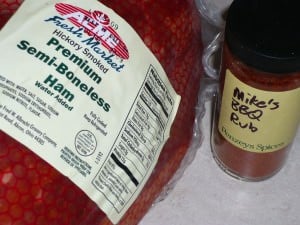 Rotisserie ham, barbecue style. Sprinkle the ham with barbecue rub and crisp it up on your grill's rotisserie. 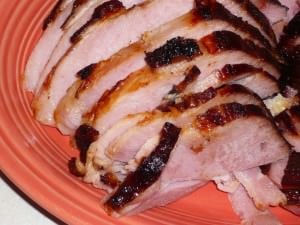 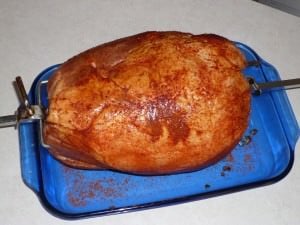