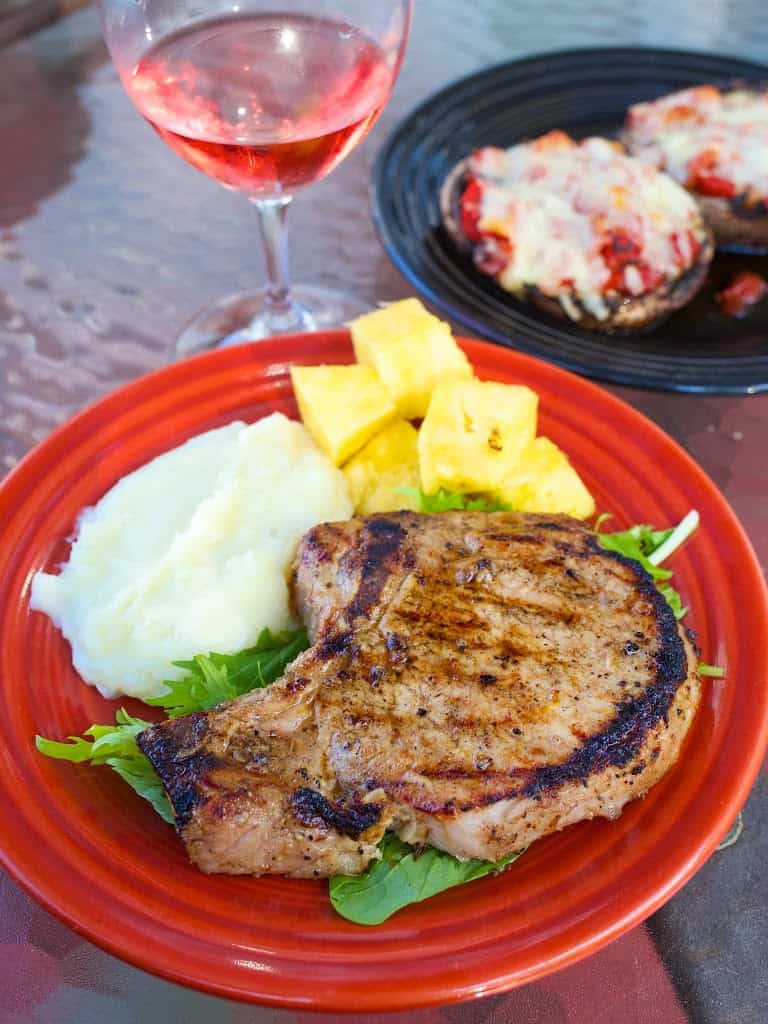 This post is sponsored by the National Pork Board and Kroger.
Don't forget to vote for America’s Top #ChopGriller! Every vote is an entry in a drawing for a Large Big Green Egg® Grill Package and summer’s worth of pork! Voting closes June 13, 2014.

In a moment of weakness, I bought regular cut pork chops at the grocery store.
They were on sale. I have such a hard time passing up a sale.I prefer thick cut chops - they are easier to cook to a juicy medium, 145°F. Regular store bought chops, about ¾ of an inch thick, don’t leave much of a margin for error. It’s tough to get a good sear on thinner chops before they overcook in the middle.

For thin chops, I use a trick I picked up from Cooks Illustrated - marinate the chops with honey and oil. The oil conducts heat, and the honey caramelizes quickly in the heat of a grill. This gives me a quick browned crust before the chops overcook. My other trick is to only worry about one side of the chops. I make sure the first side gets a good sear, and then cook the second side just long enough for the chop to be done. Better a browned and delicious crust on one side than a pale, weak crust on both sides.

The best way to test chops for doneness is an instant read thermometer, looking for 145°F in the thickest part…but it’s tough to get a reading on thin chops. Instead, I go with the poke test. I press on the chops to see how they feel. But…how should they feel? Relax your hand and poke the fleshy area at the base of your thumb. That slightly soft feeling is what rare tastes like. Now, make an “OK” sign with your thumb and pointer finger, and press the same fleshy spot on the base of your thumb. Feel how it’s a bit tighter? That’s medium-rare. Next, touch your index finger to your thumb, and poke the base of your thumb. Feel that? There is even more resistance, with just a hint of give. That’s what medium chops feel like. If you poke your chops, and they feel like this, they’re done - get them off the grill!
I use the poke test with thicker cuts. I trust my thermometer, but the poke test gives me a second opinion on how far along the chops are.

Put the marinade ingredients into a zip-top plastic bag and squish with your hands through the plastic until well mixed. Add the pork chops one at a time, tossing in the bag to coat each chop with marinade. Refrigerate for at least one hour, preferably four to eight hours. 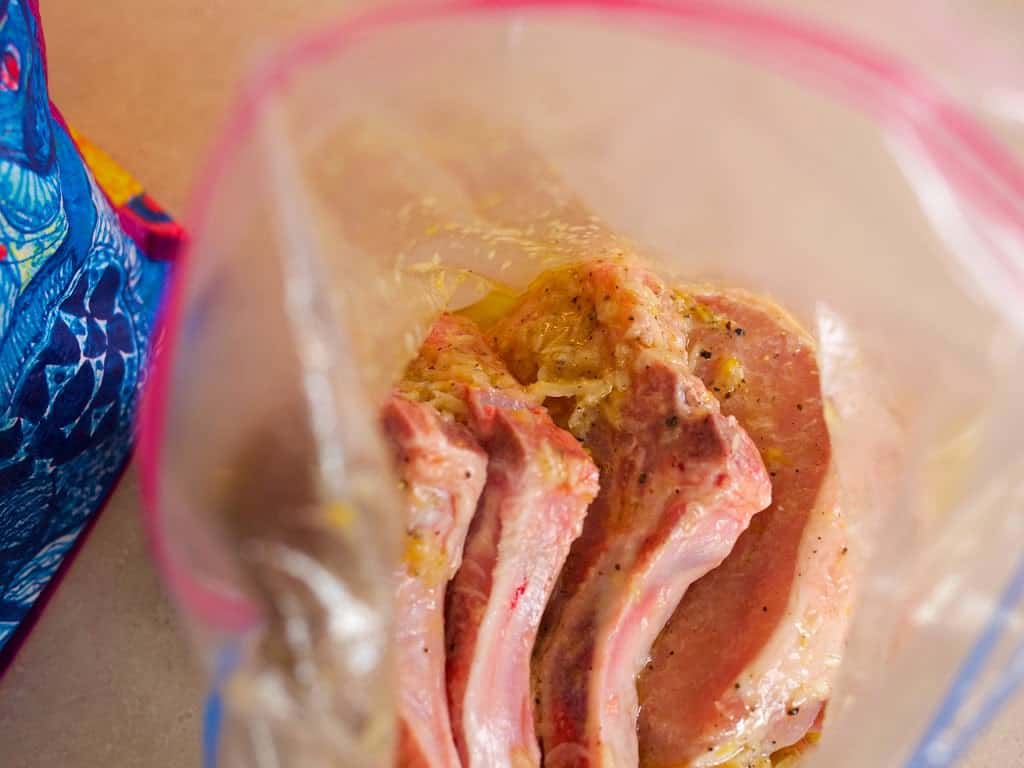 Set the grill up for direct medium-high heat. In my Weber kettle, I light a chimney ¾ full of charcoal, wait for it to be covered with gray ash, and then spread it in a packed single layer over half of the grill. I put my grill grate back in the grill, brush it clean with my grill brush, and I’m ready. 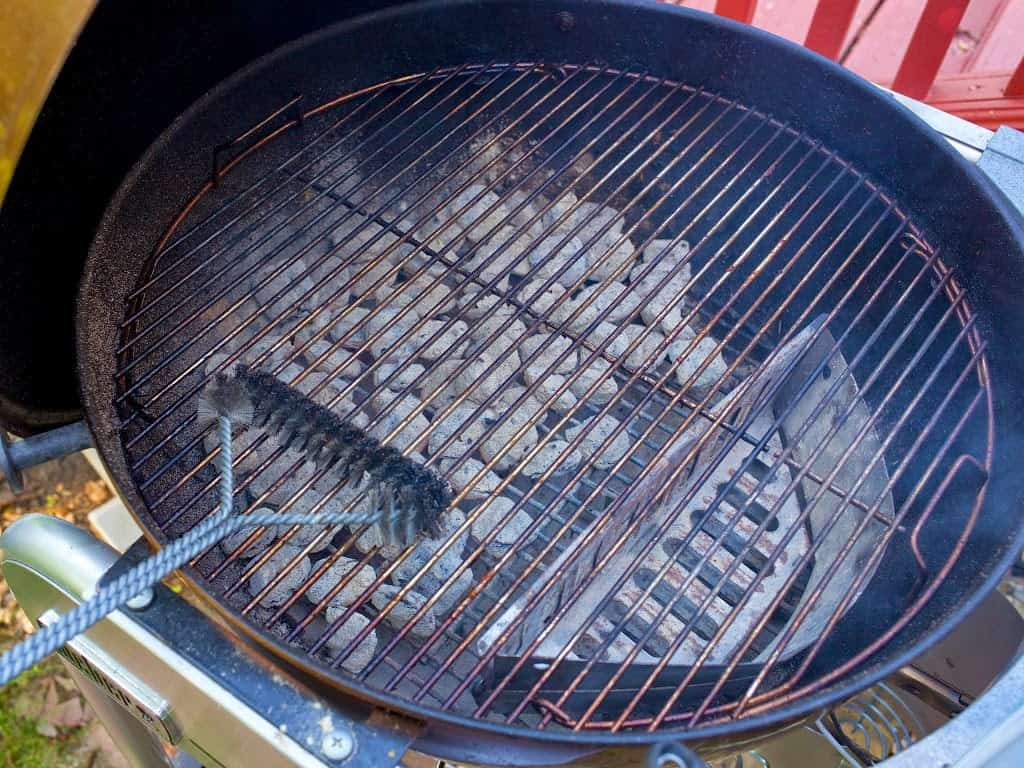 Remove the chops from the marinade, letting any excess drip back into the bag, and set them on the grill over the direct medium-high heat. (If you are cooking on a gas grill, keep the lid closed as much as possible while grilling.) Cook until the chops are starting to brown on the bottom, about 3 minutes, then rotate the chops 90 degrees (don’t flip yet), moving them around if some are browning quicker than others due to hot spots on the grill. Cook until well browned on the bottom, about 3 more minutes. Flip the chops and cook on the other side until the chops reach an internal temperature of 145*F for medium rare, about 3 more minutes. Remove the chops to a serving platter, let rest for ten minutes, then serve. 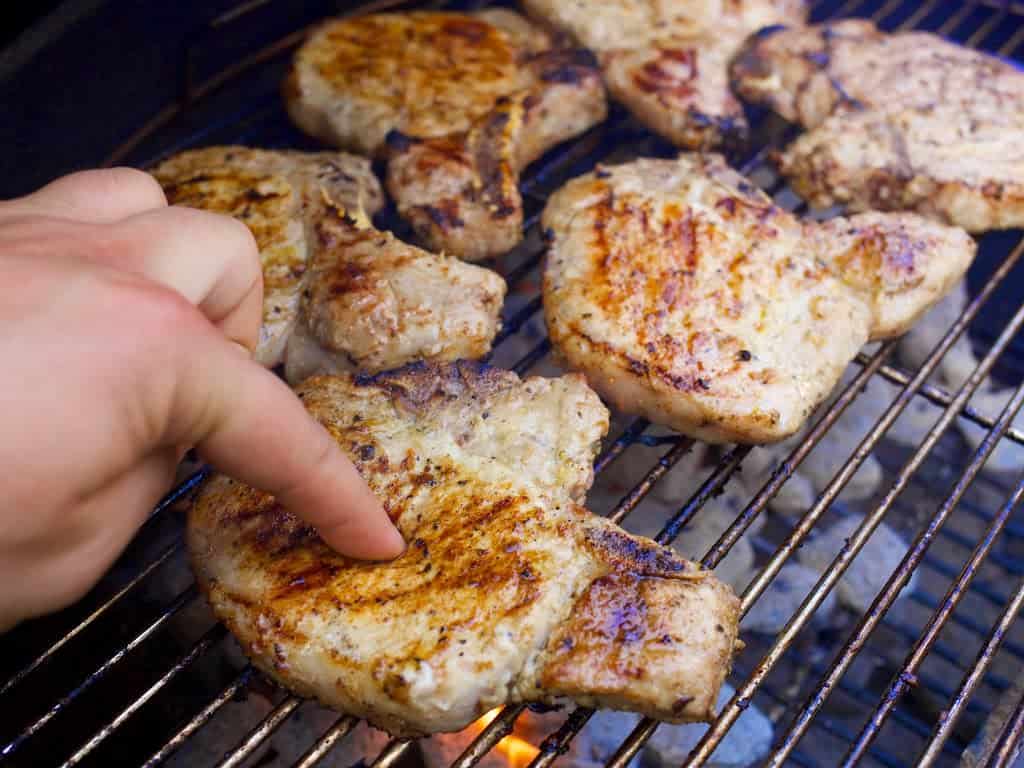 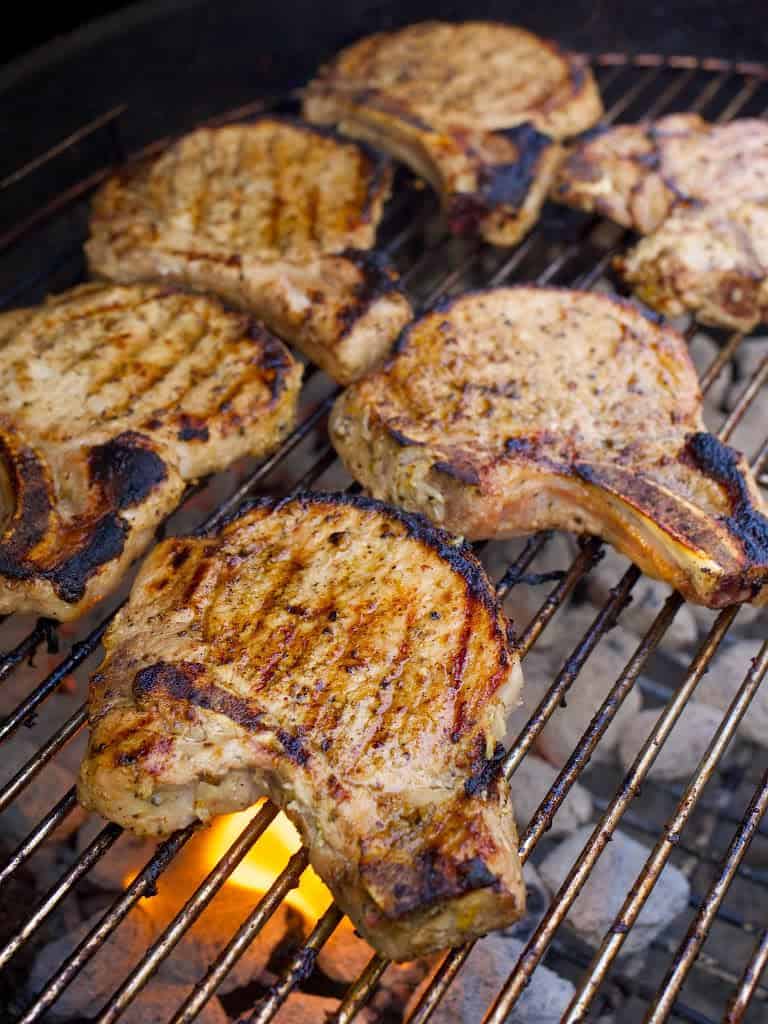