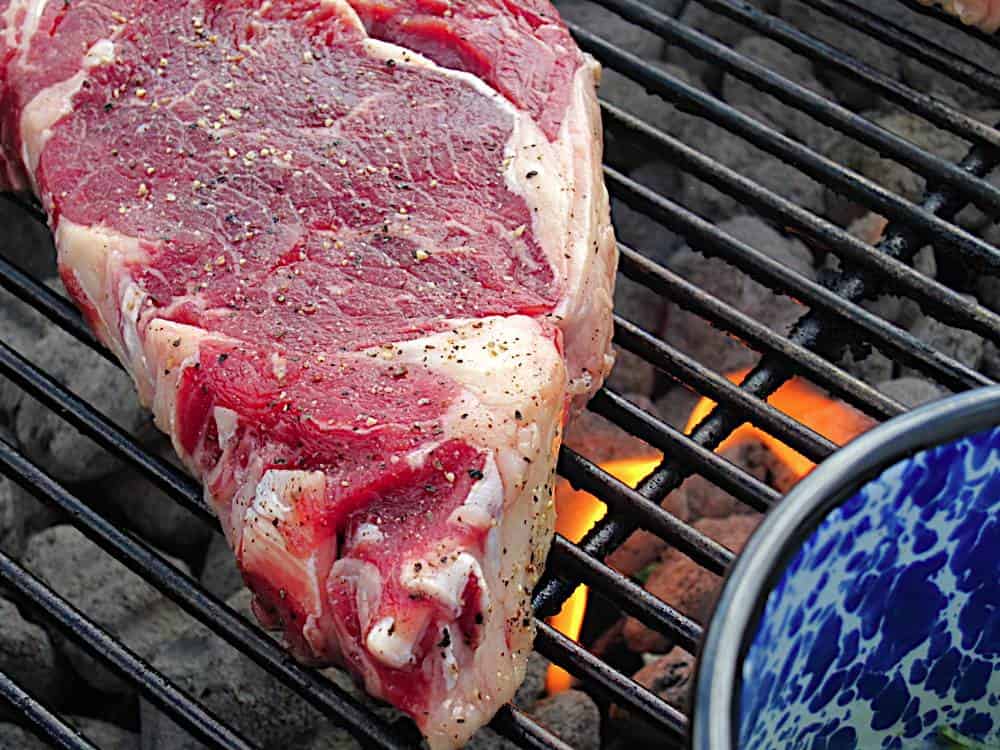 A year ago, I won the Finest Cut Steak Cook-Off at the Taste of Akron. Here is the recipe I’m going to use to defend my title: Grilled Ribeye steaks with Chiptole Lime Butter Baste.

I had a great time at the cook off last year…and not because I won. It was fun hanging out with other obsessed home cooks. People like me, who would sign up for a contest like this.
*I still don’t envy the judges at this contest. Taste is so subjective, and all the steaks I had a sample of were great. I would have hated to have to choose among them. I thought mine was just a little better, of course, but I’m biased…

I couldn’t wait to get back out there, but I didn’t want to just rest on my laurels by cooking the exact same recipe I did last time. I tried a few marinades and spice rubs, and they were good, but they tended to cover up the taste of the beef. The prime steaks West Point Market supplies for the contest are amazing. I want that huge, beefy flavor to be front and center. I kept coming back to the dry brined, herb butter basted technique that won the contest for me last year. The flavor of the herbs, garlic and butter don’t cover up the beef, they add to it.

In the end, I stopped trying to out think myself.  I did what I should have done in the first place; I followed my own advice from this website. I have a basic technique, dry brined steaks with a herb butter baste, and it working well. It is time to add a flavor variation to that basic technique.
*Yes, I know.  Listen to my own advice?  What kind of crazy idea is that?

I changed my herb butter around to make it more complex; in addition to the butter and garlic, I added a hint of heat with the chipotle, and a dash of fruity, sour taste from the lime. Oregano and cilantro in the herb brush give the flavors a final tweak. See? A couple changed ingredients, and I’ve moved from the Mediterranean to Northern Mexico.

Directions:
1. Pre-salt the steak: One to two hours before cooking, season the steaks. Rub the sliced garlic clove over the bone on the ribeye to rough it up, then rub it over the meat. Sprinkle the salt evenly onto the steaks; roughly 3/4 tsp of kosher salt per side, 1.5 tsp total per steak. Pat the salt into the steak, then let them rest at room temperature until ready to cook.
*If there isn’t time to salt the steaks *at least* a half an hour ahead of time, then wait until just before the steaks go on the grill.

2. Prepare the grill: Prepare your grill for cooking with indirect, medium-high heat, then clean with your grill brush. For my Weber kettle, I light a chimney starter* 3/4 full of charcoal, wait for it to be covered with ash, then pour it evenly over one side of the grill grate. This gives me half the grill on the heat, and half off the heat.
*I highly recommend the Weber Chimney Starter

, because it is larger than most chimney starters. It holds 5 quarts of charcoal, which is exactly the right size for cooking this recipe. 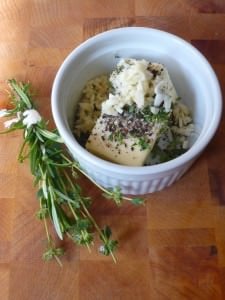 3. Prepare the Chipotle Lime Butter Baste, and herb brush: While the grill heats up, put the chipotle lime butter baste ingredients in a small bowl or ramekin. Microwave on high until the butter has just melted, and the garlic is starting to sizzle, then stir to combine. (Or, put the ingredients in a grill safe pot or cup, and melt them on the grill while you sear the steaks.) Make the herb brush by tying the thyme, oregano, and cilantro together at the base of their stems. 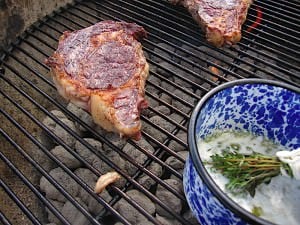 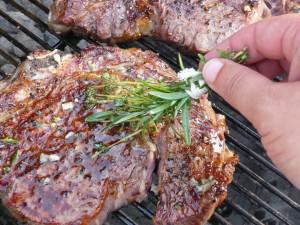 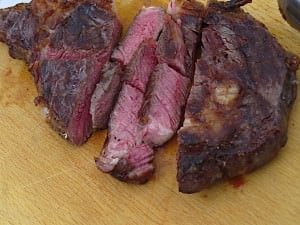 Variations:
*Other cuts: this recipe works well with any tender, thick cut, bone in steak. T-Bones and Porterhouses are good substitutions.

*Gas grill: Set the grill up for indirect cooking by preheating with all burners on high for 15 minutes. Leave one burner on high, and turn the others off. Do the searing step over the lit burner, and the indirect step just next to it. Cook with the cover down throughout the cooking time, and expect the searing step to take at least 3 minutes per rotation, and 6 minutes per side.

Notes:
*Salting the steak early: Letting the steak rest for an hour or two after salting results in the steak brining in its own juices. The salt starts pulling juices out of the steak immediately, but by about a half an hour of resting time both the juices and the salt are being re-absorbed into the steak, due to osmosis. This results in the salt being pulled deeper into the meat of the steak, seasoning it more thoroughly. However, if you don’t wait at least a half hour, then the juices are just pulled out, leaving you with a dried out steak. If you want to, you can do this overnight; just make sure the steak is wrapped in plastic wrap and refrigerated until about an hour before cooking.

*Serve with a tortillas, salsa, pinto beans, and guacamole.

*Oh, and of course, serve with a good bottle of wine. I know margaritas are the Tex-Mex favorite, but I just don’t like something that sweet when I’m eating a steak. I’d recommend a good Cote Du Rhone, or maybe a Rose if the weather is warm enough, but let your taste be your guide.

*If you can get Prime grade meat for this, do it. The taste is worth the extra expense. Too pricey for you? I would pay for the prime meat, but buy less of it, and eat less high-quality steak. I usually cut these steaks in half, and serve four people with them.


*Enjoyed this post?  Want to help out DadCooksDinner?  Subscribe to DadCooksDinner using the RSS or Email options on the right, link to this post from your blog, recommend DadCooksDinner to your friends, or buy something from Amazon.com