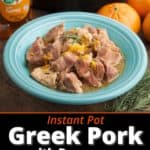 Instant Pot Greek Braised Pork with Honey, Orange, and Rosemary. A taste of the island of Ikaria, in about an hour, thanks to pressure cooking.

You have married an Icarus, He has flown too close to the sun. Burn, Hamilton, Lin-Manuel Miranda

Ikarian braised pork. How can I resist a recipe from an island named after Greek mythology? The island of Ikaria is named after the Greek myth of Icarus; when he flew too close to the sun, he supposedly fell into the sea near the island.

I saw this recipe in Milk Street Magazine, and beyond the mythological name, I was intrigued by orange and rosemary in Greek cooking. Lemon and oregano are the Greek combination I expect, while I think of orange and rosemary as Italian flavors. Looks like I need to expand my Mediterranean flavor profiles. Rosemary and orange are both common across the entire Mediterranean basin, and are commonly used in Greece and its islands.

Instant Pot Greek Braised Pork with Honey, Orange, and Rosemary. A taste of the island of Ikaria, in about an hour, thanks to pressure cooking.