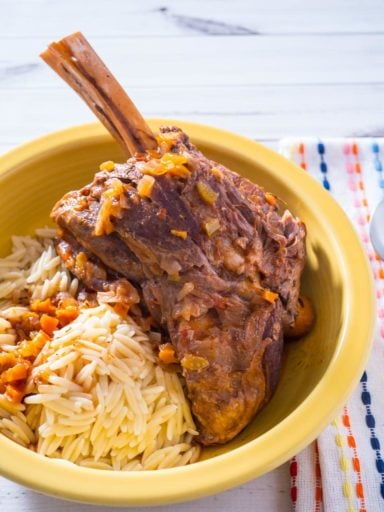 In my mind, I’m a culinary vagabond, traveling the world for exotic ingredients and new flavors. In reality…not so much. I’m a dad who lives in the suburbs, with a loving wife, three kids, and a day job. I don’t get to travel that much. I live out my travel fantasies with local ethnic eateries and food fests. I love getting a taste of a faraway land without leaving town.

I go to the Greek festival at Akron’s Annunciation Greek Orthodox Church every September. One of their specialties are Lamb shanks. They only serve them on Saturdays, they sell out quick, and I never make it before they’re gone.2I’m a Thursday night person, because the Greek Festival is the same night as my daughter’s annual Youth Philharmonic tryout. She goes and plays her violin, then we pick up a big order of moussaka, dolmathes, and baklava for dinner on the way home.

This year, as I stood in line on Thursday night, the “Lamb Shanks! Saturday only!” poster was taunting me – my schedule was booked on Saturday, and there was no way I could make it back. I decided to make my own Greek lamb shanks for sunday dinner. Opa!

(Serve these shanks with Orzo pilaf, pita bread, and a Greek salad.)

Look for short lamb shanks. Longer shanks are hard to fit in the pot of the pressure cooker. This is where having a big pressure cooker can be an advantage – these shanks just barely fit in my 6 quart pressure cooker. If I used my 8 quart, they would have fit easily. But…the video was already rolling. 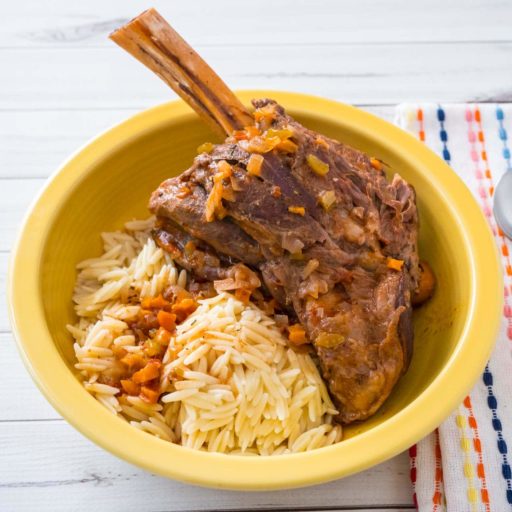