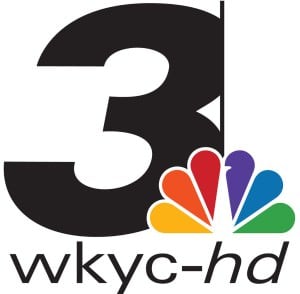 Or, as Jeff at work put it: "Paging Andy Warhol...your fifteen minutes are starting..."

I now have video of my appearances on WKYC Channel 3 News Today.

First up: a profile of me and my blog, and some shots of my White Chicken Chili from Wednesday the 20th:

Then: On Thursday the 21st, Hollie Strano cooks one of my recipes on air, then I get interviewed.  I'm live about 4:40 into the video.
Live...gulp.

Everyone in my family, and that I work with, has been emailed this video.  Other bloggers I talk to a lot have been emailed this video.  I've been grabbing people as they walk by, shoving my iPod at them, and saying "Did you see me on TV?"  If you fall into any of these categories, I'm sorry for being repetitive.  I'm just so excited.  I think the adrenaline is starting to wear off, and it's three days later...

Here are the questions I've been asked by the unsuspecting victims freinds and family I've shown the videos:

1. Is Hollie as nice as she seems on TV?
Yes, absolutely!  She's a sweetheart.  The first video was shot at my house, and Hollie showed up before the cameraman did.  We talked about food and our kids for about a half an hour before the shooting started, and I had a great time chatting with her.  She insisted I come to the set for Thursday's shooting of Hollie's dish of the Week, so I could taste how she did with my recipe.

2. She didn't follow your recipe!
Yes, and I'm OK with that.  She had to improvise with some of the ingredients, using what she had on hand.  I talk about this in the original recipe - it is a good base for variations, and the sauce can be almost anything you want it to be.*  She did put a rather large handful of dried herbs in there.  OK, two handfuls.  In the recipe I say "make sure it is highly seasoned", and Hollie sure took me at my word! The sauce turned out fine, and it all tasted really good.
The key to the sauce is to add 1 cup of chicken stock, or some other liquid, to the pan.  That dissolves the browned bits on the bottom of the pan, and builds a very flavorful sauce.

3. Live on TV!  Were you nervous?
Surprisingly, no.  I think it's because I'm passionate about home cooking.  Give me an opening, and I'll talk your ear off about techniques, recipes, ingredients, where to shop...  (Hey, maybe I should start a blog!) The fact that it was live on TV didn't worry me.
It also helped to chat with Hollie for the earlier shoot; it just felt like an extension of that conversation.

4. Are you going to be on TV again?
I had a great time, and I'd do it again...once I get caught up on my sleep.  They get up really, REALLY early for the show.  Also, this was an act of kindness from my sister-in-law, Erin, a producer at WKYC.  I appreciated the opportunity, and I don't want to be a pest by asking to be on again any time soon.

5. What did you learn from the experience?
Don't take a big bite of food if I'm on live TV!  All I could say for the last 30 seconds was "MmmMmm" while I waved my hands around.

Once again, a huge thank you to Erin and Hollie for giving me this opportunity.  I had a great time!

« Pork Chop Saute with Orange Mustard Sauce
What my rotisserie wants to be when it grows up... »