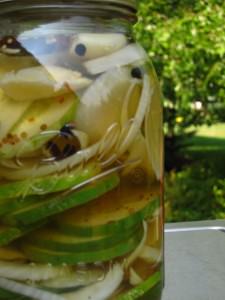 My brother, Matt (the Doctor!) left these at our cottage this summer. I had a couple on a burger, and then fished a few out of the jar and ate them raw. Then I ate a few more. Then...well, long story short, by the time dinner was done, the pickles were all gone. And I was considering drinking some of the juice left in the jar.
*Thanks, Matt!

I received a bunch of pickling cucumbers from my CSA, and then I bought some more, to make a jumbo batch of pickles.  I put them in the crisper drawer in my refrigerator, and they sat.  I did all the other pickle recipes for Pickle Week first.  I found, much to my dismay, that cucumbers don't keep well.  By the time I got to them, all the pickles had turned bad. One batch was furry; the other was slimy. What I have since learned is cucumbers don't keep well; after 24 hours they start to deteriorate. Make your pickles as soon as you can!

This recipe is based on one from my hero, Alton Brown.
*Technically, it's from his evil twin brother, B.A.  On the "American Pickle" episode of Good Eats, Alton did a sweeter bread and butter style pickle, while B.A. did one very similar to this... 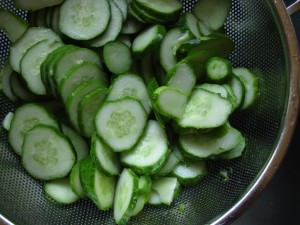 Directions:
Click here for the basic technique of pickling vegetables.
1. Prep the vegetables: Put the sliced cucumber, sliced onions, and crushed garlic in your jar. 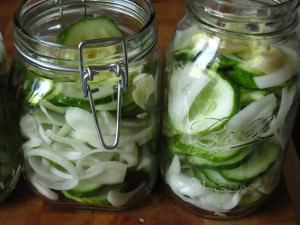 Jars of pickles, onions and garlic, ready for the pickling liquid

Variations:
*In his show, Alton also did a different version, B and B's. In it, he skipped the garlic, used half the spice amounts, and used 1.5 cups(!) of sugar. If you're looking for bread and butter style pickles, try this version instead.

Notes:
*My favorite site about Good Eats is the Good Eats Fan Page. They have every bit of information you could possibly want about Good Eats - including written transcripts of every episode!

*Ideas for next time: I'm going to skip the champagne vinegar. Also, I want some garlic dill pickles - that's my next pickle adventure.