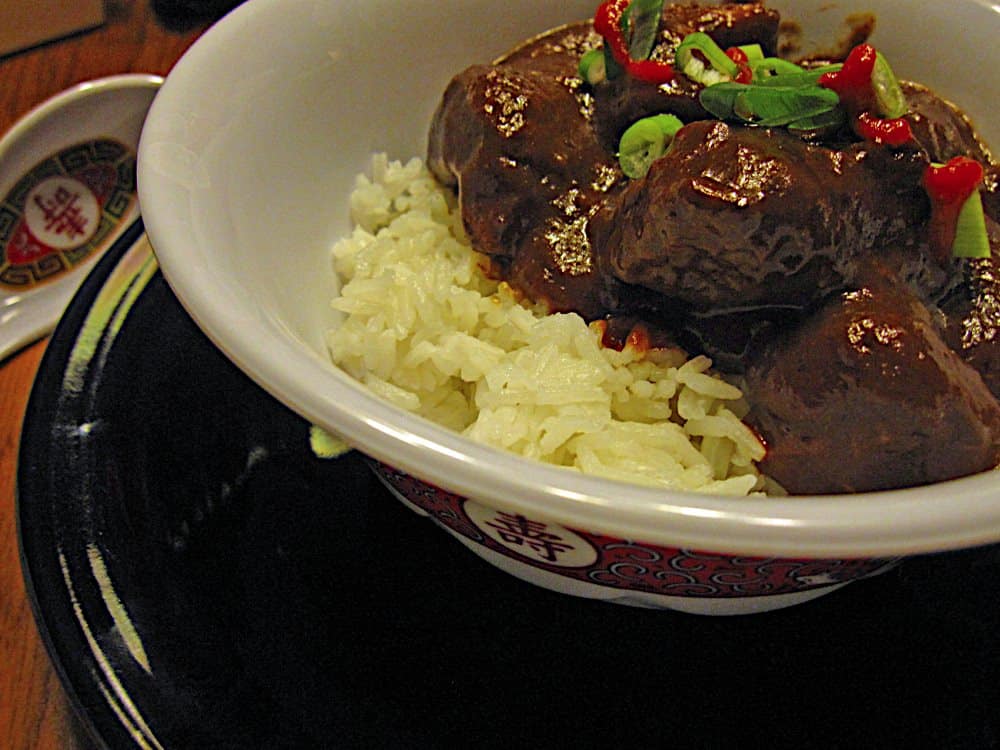 I was introduced to the idea of pork and prunes (excuse me, dried plums*), by one of Tom Johnson's cooking classes at the Western Reserve School of Cooking. He did a traditional French pork and prune dried plum dish. Then, in a different class, he did a Chinese lamb and dried plum stew. Both dishes were excellent - the earthy, fruity, and sweet flavor of dried plums makes a great backdrop for both pork and lamb.
*Dried Plums is the new name for prunes. The California Dried Plums Association decided that prunes needed a makeover.

Then I came across Lorna Sass's recipe for pressure cooking meat in gingered plum sauce. Now, instead of a recipe that simmers for two hours, I have a recipe that is cooks for 15 minutes under pressure. This combination of Tom and Lorna's recipes has made a a regular appearance in my kitchen ever since.

Directions:
1. Season and sear the pork in two batches: In a large bowl, toss the cubes of pork with 2 tablespoons of soy sauce. Heat 1 teaspoon of vegetable oil over medium-high heat in your pressure cooker pot until it is shimmering. Add half the pork, and sear for 2 minutes per side, or until well browned. (I treat the pork cubes as if they have four "sides", so this should take about 8 minutes.)  Remove the browned pork to a bowl. Add the second half of the pork to the pot, and sear for 2 minutes per side. Move the second batch into to the bowl with the rest of the browned pork. Pour off all but 2 tablespoons of the oil and fat in the cooker.

2. Saute the aromatics: Add the onion, garlic, ginger and scallions to the pot, and saute for five minutes, or until the onions are softened. Add the chicken stock to the pot, increase the heat to high, and scrape the bottom of the pot to loosen any browned bits from the bottom.

3. Pressure cook the stew:Add the seared pork, plums, 2 tablespoons soy sauce and vinegar to the pot, and stir until well mixed. Lock the lid on the pressure cooker. Wait for the pressure cooker to come up to high pressure, then lower the heat to maintain that pressure and cook for 15 minutes. Remove from the heat, allow the pressure to come down naturally for 10 to 15 minutes, then quick release any remaining pressure.

4. Prepare the sauce: Remove the pork to a serving platter with a slotted spoon. Let the sauce rest in the pot for ten minutes, then skim off as much fat as you can from the surface.  Using a hand blender, puree the liquid in the pressure cooker to make a thick sauce.  Taste the sauce, and add more soy sauce or vinegar if you think it needs it.  Pour the sauce over the pork on the platter, and serve.
*Be careful - you get a lot of sauce with this recipe. Don't overflow the platter. Not that I spilled plum sauce all over my counter while I was taking pictures of this recipe for the blog, or anything like that... 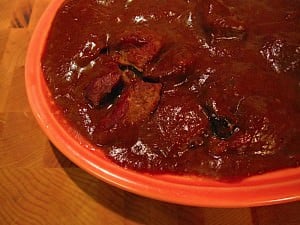 Variations:
*Don't have a pressure cooker? Replace step 3 with:

Dutch oven: Put the ingredients in a dutch oven and bring to a boil. Cover the dutch oven, and move to a 325*F oven. Cook in the oven for 2 hours, then remove and continue with step 4.

Slow cooker: Put the ingredients in a slow cooker, and cook on high for 3 hours, or low for 6 hours. Continue with step 4.

*Lamb: From Tom Johnson's original recipe, use 3 to 4 pounds of cubed lamb shoulder (or lamb shoulder steaks) instead of the pork.

*Busy Weeknight Version: Skip the searing in step 1 - just toss the pork with the soy sauce, and add it to the pot in step 3.  You don't get the depth of flavor that seared pork and its fond add to the sauce, but there are enough other flavors in this recipe to make up for it.  Skip the resting and skimming of the sauce in step 4, go straight for the stick blender.  The sauce will be a little fatty, but it still tastes delicious.

Notes:
*As I said in my I love pressure cookers post, every pressure cooker works differently. Make sure you have read your pressure cooker manual before starting this recipe, so you know how to lock it, tell when it's up to high pressure (15 PSI), and how to release the pressure when you're done.

*If you have the time: make the recipe the night before, refrigerate, then reheat.  This gives you two advantages: the flavors combine better after a day of resting, and the fat all congeals on the surface, making it easy to lift off in big chunks.  To do this, finish the recipe through step 3 (pressure cooking), then let the stew cool to room temperature.  Store it, covered, in the refrigerator overnight.  The next day (or up to 3 days later), remove from the refrigerator, and scrape the fat cap from the top of the pot.  Reheat over medium heat until simmering, then, continue with step 4 (remove pork cubes and puree the sauce.)

*I love this plum sauce with white rice. The combination of the sticky, sweet, earthy sauce and the plain white rice gives me that same homey feeling that I get from mashed potatoes and gravy. I'm tempted to save leftover plum sauce, without the meat, just to serve on rice.  It is a huge upgrade over the plum sauce you buy in jars at the chinese grocery.

*Oh, and in a tip of the hat to Tom at ExploringFoodMyWay - yes, that's Sriracha sauce you see in the picture up top.  A spark of heat adds a nice finish to this dish.

*If you're really in a hurry, you can quick release the pressure on the cooker after the 15 minutes of cooking time. But, I think the texture of the pork is a little better if you let the pressure come down naturally.
*And it freaks my kids out when the pressure cooker is unloading steam from high pressure - it is quite loud.

(And check out Lorna's pressure cooking blog at pressurecookingwithlornasass.wordpress.com)