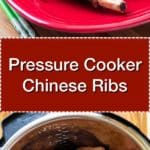 My kids are on a serious Asian food kick right now; every day, it’s “I want Teriyaki”, or “can I put Gochujang on that?”. And, always, where’s the rice?

Now, I’m not against this - I love Asian food myself - but I don’t want to make stir-fry every night of the week, especially when I need to do a recipe for my pressure cooker. If you’re a regular reader, this recipe will look familiar - it’s my Pressure Cooker St. Louis Cut Spareribs, but with a Chinese-American flavor profile. Chinese Spare Ribs are a standard appetizer in every street corner Chinese restaurant I’ve gone to, and with good reason - the reddish, sticky sauce is great with tender pork.

So…why aren’t my Chinese ribs red? Because the red color comes from food coloring…yes, even the ribs at your local take-out. Me? I didn’t feel like digging out the Christmas cookie box to find the little bottles of food coloring buried in the bottom. The other ingredients in the glaze, especially the hoisin sauce, will give it a hint of red - but hoisin has always looked more black than red to me.

Also, these ribs are a lot more melt-in-your-mouth tender than they are crispy and stir-fried. That’s the pressure cooking - it does a fantastic job of tenderizing the ribs in about an hour. Sometimes, when I want to get fancy, I’ll run the ribs under the broiler to crisp them up a bit - see the optional step at the end of the recipe.

As for the kids? They were suspicious that the ribs were not red. (That's a quote up at the top.) But, once they tried them, we blew through the rack of ribs in no time.