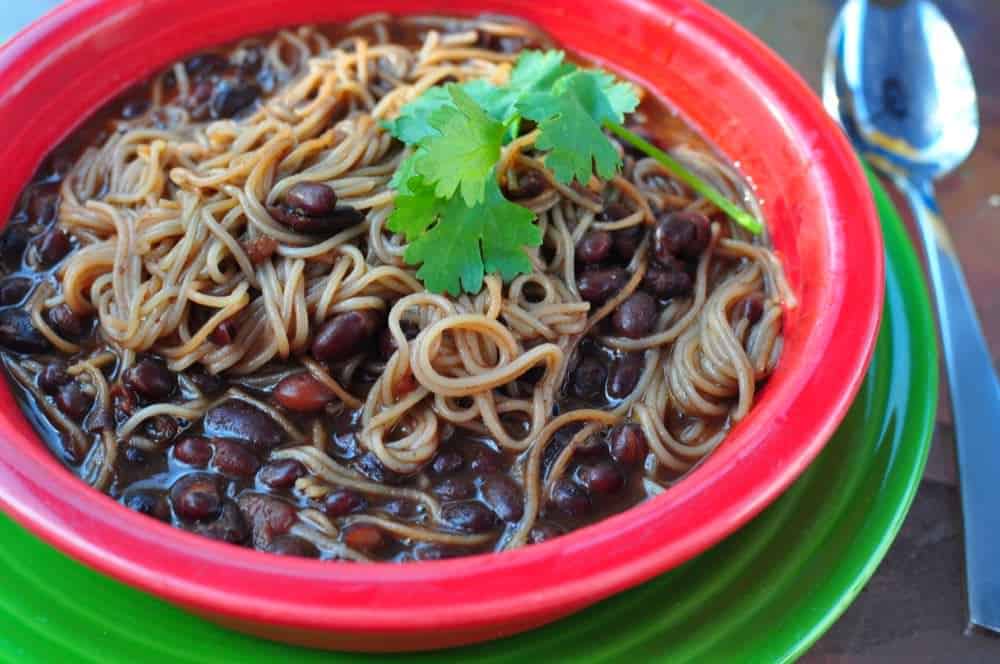 I love my pressure cooker. Except…there's no evaporation. Once you lock that lid, all the liquid is trapped. I'm used to a thick broth when I cook dried beans, and it's tricky to get the amount of water right in the pressure cooker.

I love noodle soup. Except…dry pasta soaks up too much liquid. I add eight ounces of pasta to a soup, and pretty soon I have noodle stew, not a soup.

I should have put two and two together, but I'm a slow learner. I made pressure cooker pasta fazool - bean soup with dried pasta - and suddenly my problems were over. I had a thick bean and pasta soup. Perfect!

I'm taking this idea south of the border. I combined a Mexican black bean soup with fideos, Mexico's vermicelli noodle soup. The result is a thick black bean and pasta soup. It's not Authentic Mexican, but it sure tastes good.

1. Brown the vermicelli and bloom the spices:
Heat the vegetable oil in the pressure cooker pot over medium-high heat until shimmering. Add the vermicelli nests in a single layer; cook in batches if you need to. Brown the nests on one side, about 1 minute. Carefully flip the nests and brown on the other side, about another minute. Remove the nests to a paper towel lined plate with a slotted spoon, leaving as much oil behind as possible. After all the nests are browned, add the cumin, chile powder, and chipotle to the hot oil. Cook the spices until they are sizzling and fragrant, about 1 minute.

3. Cook the pasta:
Fish out the cilantro bundle and the head of garlic, and discard, then stir the tomatoes into the beans. Turn the heat to high under the cooker and bring the pot back to a simmer. Stir in the 1 tablespoon Kosher salt and the browned pasta. Simmer until the pasta is tender, about 9 minutes. (Note - do not lock the lid again - we aren't cooking the pasta under pressure.) Stir in the lime juice, taste, and add more salt, pepper, and lime juice as needed. 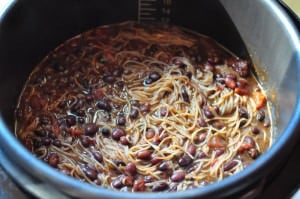 4. Serve:
Ladle the soup into bowls, sprinkle the accompaniments on top, and serve.