That said…this has been a frustrating recipe for me to get right enough to publish. Different recipes suggested a low of 16 minutes (not enough) to a high of 35 minutes (good – but seemed long). My test results were all over the place. One time, the cheesecake was perfect at 25 minutes; when I re-tried at 25 minutes, it was undercooked and runny in the middle. That said, my kids loved the experiments. Even the 16 minute cheesecakes that were falling apart in the middle were fought over. “No, I get the leftovers – you had an extra piece last time!”

I learned three things, trying to get the timings down. The first: minor differences make for major changes in the cheesecake. I get a smooth top on the cheesecake when I cover the pan with foil – but it adds ten minutes to the cooking time. (That’s why one was perfect at 25 minutes, and another was not.) The second: the pan matters. I prefer a springform pan, because it is easy to get the cheesecake out of the pan – but a heavier aluminum pan with solid sides and a push-up bottom cooked the cheesecake quicker.

The third thing: pressure cooker cheesecake is hard to mess up. (And, even when I messed up, everyone gobbled down the “failures”.) Pressure cooking steams the cheesecake at 240°F to 250°F, a much lower temperature than you get in an oven, so it is difficult to overcook. My most consistent results were at 35 minutes under pressure; they never overcooked, and came out creamy and smooth all the way through.

Want to impress your guests with something completely out of left field from the pressure cooker? Make a cheesecake. 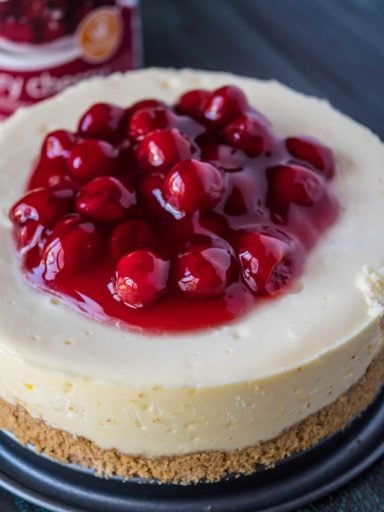