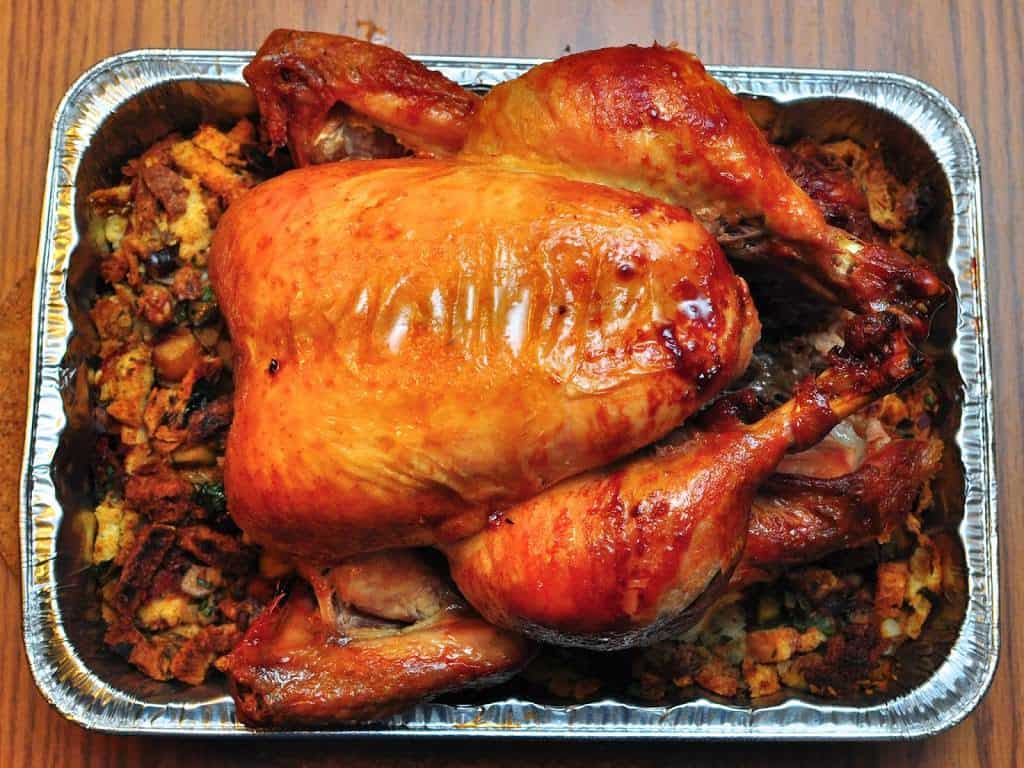 Rotisserie capons with chestnut stuffing. It just sounds like Christmas, doesn't it? When I saw it mentioned in Canal House Cooking, I knew what I was making for the holidays this year.

Now, I've never cooked a capon before. Capons are roosters that are…um…fixed, as a veterinarian would say. The result is a big, lazy bird that grows nice and plump - the average size of a capon is eight pounds. It's the right size bird if you need something larger than a chicken, but smaller than a turkey.

Now, for the stuffing. My hero, Alton Brown, said that stuffing a bird is evil. By the time the stuffing is cooked to a safe temperature, the bird around the stuffing is wildly overcooked. I solved this with a trick from Cooks Illustrated - preheat the stuffing in the microwave. The stuffing is hot when it goes into the bird, and the meat doesn't overcook.

Then came my next problem. Rotisseries and stuffing are not a good combination. I stuffed the bird, trussed it tight, and turned on the rotisserie. As the bird rotated, the stuffing worked its way out of the cavity and fell into the drip pan. The result was an empty bird and a pan full of burned stuffing.

I thought of trying a stuffing bag, but I didn't think I'd be able to get the rotisserie spit through the tough cotton. Then I saw Kenji Alt's idea of using cheesecloth to make a stuffing bag. Perfect! Cheesecloth has a very loose weave, leaving gaps for the point of the rotisserie spit to push through. As a bonus, the bag of stuffing is easy to pull out of the bird and pop in the microwave for pre-heating.

Rotisserie Capon with Chestnut Stuffing. A big bird with stuffing on the rotisserie, using the "preheat the stuffing in the microwave" trick.

Rotisserie Pan Bread Stuffing with Cranberries and Apples
Rotisserie Chicken, Dry Brined with Rosemary and Lemon
Click here for my other rotisserie recipes.