I was haunted by Peruvian spit-roasted chicken. It’s right up my alley - rotisserie chicken? I’m there. And the Internet kept talking about this fast food sensation sweeping the nation. But “sweeping” was an exaggeration - my nearest Peruvian chicken joint is a two and a half hour drive away in Columbus.

I wanted to make my own Peruvian chicken. But the recipes are few and far between, and none of them seem to agree on the ingredients. I resigned myself to waiting until I could taste the real thing.
Impatiently. I hate waiting.

Last year, while vacationing in Sonoma valley, I had my chance. I was looking for dinner, and saw Sazon Peruvian Cuisine. I dragged the wife and kids there, promising Diane a Pisco Sour and the kids all the french fries they could eat.
Peru is the birthplace of potatoes. I figured I was safe with that promise.

Pollo a la Brasa was worth the search. The spice rub had flavors I couldn’t place, so I pumped our host for information. He said there were 14 different spices in their marinade, including Coca-Cola. But the key, he said, was Aji - Peruvian peppers. I dutifully wrote that down.

Back from vacation, I was ready to go. Then I hit my next stumbling block - Aji is hard to find in Akron. Eventually I broke down and ordered a (very expensive) jar of Aji Amarillo pepper paste on the Internet. 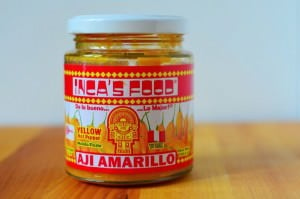 Drop the garlic and ginger into a running blender or food processor, and process until minced. Add the rest of the Peruvian Paste ingredients and blend into a thick paste. Rub the chicken with the paste, inside and out. Gently work your fingers under the skin on the breast, then rub some of the paste directly onto the breast meat. Put the chicken in a baking dish, then let it rest in the refrigerator for at least two hours, preferably overnight. 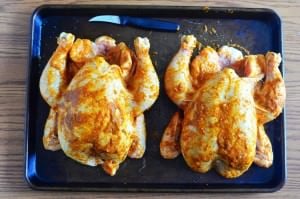 2. Truss and spit the chicken

One hour before cooking, take the chicken out of the refrigerator. Fold the wingtips under the wings and truss the chicken. (Trussing instructions here). Skewer the chicken on the rotisserie spit, securing it with the spit forks. Let the chicken rest at room temperature until the grill is ready. 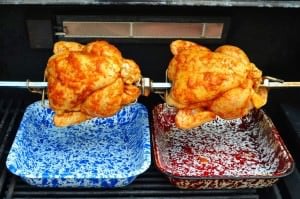 3. Set up the grill for indirect high heat

Set the grill up for indirect high heat, about 450°F, with the drip pan in the middle of the grill.
For my Weber Summit, this means removing the grates, turning the two outer burners (burners 1 and 6) to high, setting the infrared burner to high, and preheating the grill for ten to fifteen minutes.

Put the spit on the grill, start the motor spinning, and make sure the drip pan is centered beneath the chicken. Close the lid and cook until the chicken reaches 160°F in the thickest part of the breast, about 1 hour. 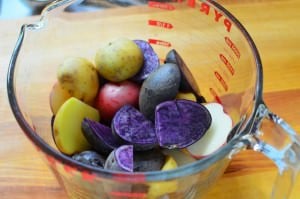 Remove the chicken from the rotisserie spit and remove the twine trussing the chicken. Be careful - the spit and forks are blazing hot. Remove the drip pan, and use a slotted spoon to transfer the potatoes to a platter. Let the chicken rest for 15 minutes, carve, and serve. 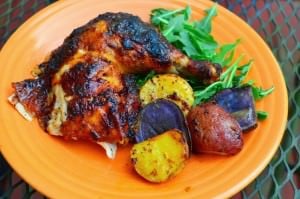 Available in paperback,
or as a Kindle e-book, so you can download it and start reading immediately!