Fall is my favorite season. I love a crisp, clear fall day, with the leaves in a riot of colors while you make a trip to the apple orchard.  In fall, my cooking starts to shift back to heartier meals.  The colder temperatures lead me back to soups, roasts, and stews.  This recipe just shouts "fall" to me: rotisserie bone-in pork loin with an apple cider brine.
*The apple cider came from Rittman Orchards.

Pork and apples is one of the classic food combinations, because it goes so well together.  I like this brine because of the layers of flavor it gives you.  The sweet-sour combination of the apple cider and brown sugar give you a more complex set of flavors than a regular salt water brine.

Directions:
1. Brine the pork roast: Four to eight hours before cooking, mix the brine ingredients in a container large enough to hold the pork roast. Stir until the salt and sugar are dissolved, then add the pork roast. Cover and refrigerate until it's time to cook.

2. Prepare the grill: Set your grill up for rotisserie cooking at high heat. For my Weber Summit, this means preheating my grill for 15 minutes with all the burners on high.  (Make sure you remove the middle grill grate before you do this, so you don't have to juggle a hot grate.)  Then I turn off all the burners except for the two outer burners (burners 1 and 6), and I light the infrared burner and turn it to high as well.  I put my drip pan in the middle of the grill, over the unlit burners. (See My Rotisserie Basic Technique Post for more rotisserie setup details.) 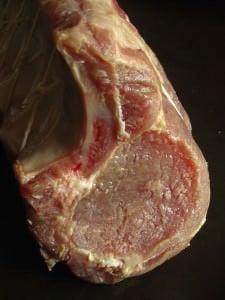 3. Truss and skewer the pork roast: While the grill is pre-heating, remove the pork from the brine and pat dry with paper towels. Truss the pork by tying it with the butcher's twine between each bone. I had a 5-bone roast, so I trussed it five times. Skewer the roast lengthwise with the spit, aiming a little off-center, towards the bones.


4. Cook the pork roast: Put the pork roast in the rotisserie, and start it spinning. Cook with the lid closed, roughly 35 - 50 minutes, or until the roast reaches an internal temperature of 140*F to 145*F at its thickest part. My four pound roast cooked in 45 minutes. I would expect a larger roast to take a little longer, but not much, since the time is determined by the thickness of the roast, not the weight. When you reach the correct internal temperature, remove the roast from the spit and let rest for 15 minutes. 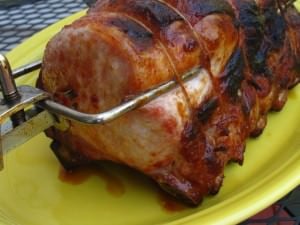 5. Serve the roast: Remove the twine from the roast, then carve.  There are two ways that I like to carve the roast. The first is to cut the bones from the roast, turning it into a boneless roast, and a rack of ribs.  Then I cut the roast into ½" thick slices, and the ribs between the bones, to serve as individual ribs.

The second way to carve is to cut the roast into chops; this is what you see in the pictures.  Cut down along the side of each bone, and serve each slice as a bone-in chop.  Either way, pour any juices saved from the resting or carving over the sliced roast, and serve. 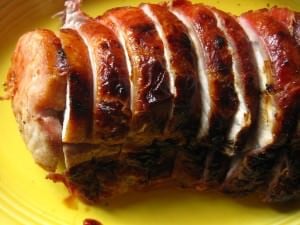 Variations:
*Plan brine: Replace the apple cider with water, and increase the brown sugar to ½ cup.

*Spice or herb rub the roast after brining: The spice rub from my rotisserie pork shoulder would go really well with this.


Notes:
*I had to cook this recipe twice to get it right for the blog.  The first time, I tried cooking the roast using only the rotisserie burner, without using the grill's outer burners like I usually do.  Pork roasts aren't that thick, and I was hoping that the lower overall heat would give me some extra time to brown the roast.  I was also hoping that the direct infrared heat from the rotisserie burner would also help with the browning. This approach gave me an internal grill temperature of 350*F.  The pork loin didn't brown as well as I had hoped (see the pictures below).  I did some browning, as you can see in the pictures, but it was only browned really well at the rib tips.  Compare it to the other picture, which was my second try using my normal approach - light the IR rotisserie burner and the outer burners, which gives me a 575*F to 600*F temperature inside the grill.  Cooking it that way worked much, much better - I had excellent browning by the time the pork's internal temperature reached 140*F.  What lesson did I learn?  High heat is more important than infrared heat when it comes to browning your roast - you want the grill as hot as you can get it if you want good browning. 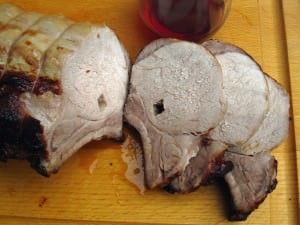 "Before" - IR Burner only - look how pale the roast is, except around the bones 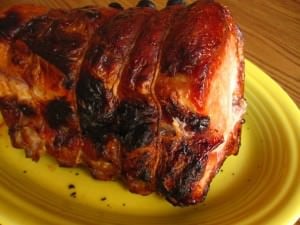 "After" - IR Burner plus grill's outer burners - much, much better browning

*To make the pork easy to remove from the bones, ask your butcher to either cut through the chine bone on the back of the roast, or remove it entirely.  It's very thick, and you really need a butcher's band saw to cut it.  The picture of the brined loin between steps 2 and 3 has the chine bone entirely removed.

*Oh, and as you can see in the "before" picture, a hearty red wine goes well with this.*  We served an Acacia Pinot Noir from Carneros, California.
*Always keep your cook well lubricated, that's my motto.

Inspired by:
Everyone finding my blog through Google searches for Rotisserie Pork Roast. Thanks, guys!