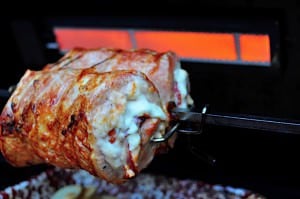 I complain a lot about bland pork loin. By breeding out the fat in pork, the Other White Meat has become a slab of protein without any real flavor, and one that turns dry if it is slightly overcooked. Here is my solution to those problems - use pork loin as a carrier for other ingredients that have a big hit of flavor.

The problems I listed above are an advantage when pork loin is used as a delivery system for stuffing. The solid slab of protein makes it easy to cut into a wide, thin, flat surface. The bland meat takes on whatever flavors it is stuffed with. I still have to watch out for overcooking, but I brine the pork loin to give an extra cushion, and to pump the loin up with flavor.

The next step was to pick out the type of stuffing I wanted to use. I chose an Italian cured meat theme. Sandwich pepperoni and capicola were on sale at my local grocery store, and I added provolone for a layer of melted cheese. Finally, I picked up a package of mixed poultry herbs to add the flavors of thyme, sage and rosemary. The result is layers of flavor. It starts with the brined pork loin, with that incredible browned crust from rotisserie. That gives way to a layer of herbs, followed by the spicy pepperoni and the smoky capicola, and a finishing hit of oozing provolone. Pork loin is not boring if it is filled with this much good stuff.

Inspired by: Steven Raichlen How To Grill

Directions:
1. Butterfly and brine pork loins: Mix the brine ingredients together in a container large enough to hold the pork loins. Let the salt and sugar in the brine dissolve while preparing the pork loin. Slash the fat on the top of the pork loin by making parallel, shallow cuts about ½" apart. Butterfly the pork loins, opening them up for the stuffing. (See pictures below for a visual explanation.) Turn the loin on its side, and a lengthwise cut, ⅓ of the way into the loin, cutting to within ½" of the far side - the cut should go almost all of the way through, but not quite. Fold this cut open, then turn your knife and continue the cut into the loin, mid-way through the remaining, larger side of the loin, cutting again to ½" from the far side. When you fold this final cut open, the loin should be an even thickness all the way across. Repeat with the second loin. Stir the brine until the salt and sugar are dissolved, then add the butterflied pork loins. Refrigerate for 2 to 4 hours to let the brine penetrate the meat.

2. Prepare the grill: Set the grill up for rotisserie cooking at high heat. For my Weber Summit, this means removing the grates, turning the two outer burners (burners 1 and 6) to high, and turning the infrared burner to high. Then I put my drip pan in the middle, over the unlit burners, and let the grill preheat for ten to fifteen minutes. (See My Rotisserie Basic Technique Post for more rotisserie setup details.) 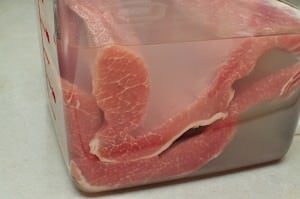 3. Stuff and tie the pork loins: While the grill is preheating, stuff and tie the pork loins. Remove the loins from the brine, and pat dry with paper towels. Spread the loin out, fat side down. Sprinkle with half the herbs and a light coating of black pepper. Top the loin with a layer of pepperoni, a layer of provolone, and a layer of capicola. Roll the loin back up the way you sliced it; the fat should wind up on top, with a spiral of stuffing inside the loin. Truss the loin in a couple of places with butchers twine. Repeat with the second loin, stuffing and tying. Now, take the two loins and put them together with the fat caps facing outward, and trust the two loins together, using butchers twine about every inch and a half. Finally, run the rotisserie spit between the two trussed loins, driving the forks into the middle of the loins to hold them steady.

4. Cook the stuffed pork loins: Put the spit on the grill, start the rotisserie motor, and cook with the lid closed. Check the loins after 45 minutes, and every 15 minutes after that; if they are getting too browned, turn the heat on the grill down to medium (I do this in my Summit by turning off the rotisserie burner; in a charcoal grill it happens naturally as the coals burn down.) The total cooking time will be an hour to an hour and a half; the loin is done when it measures 140*F internal temperature at its thickest point when measured with an instant read thermometer. When checking the temperature, watch out for the spit and the forks, because they will throw the reading off; aim for the center mass of one of the loins.

5. Serve: Remove the loins from the spit, and cut the twine from the loins. Let them rest for at least ten minutes before carving. Cut the loins crosswise into ½" thick slices and serve. 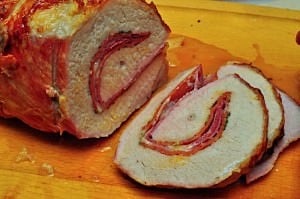 Variations:
*Different deli meat in the stuffing: Any Italian deli meat will do in the stuffing - I picked pepperoni and capicola because they were on sale, but I have to admit that I went in planning on prosciutto. I just couldn't get over the price difference, especially since it wasn't the real thing from Italy. In the end, I would get about a pound of whatever looks good, with one half being a salami or pepperoni style meat, and the other half being a ham, capicola, or prosciutto style meat. (But if I did buy prosciutto, I would cut the amount of meat in half, to showcase it).

*Different cheese in the stuffing: I picked provolone because it was easy, and I think it has more flavor than mozzarella. But, mozzarella would work, and asiago would also be a good choice.

Notes:
*The cheese will ooze out of the sides of the loin, so make sure to cook some rotisserie pan potatoes in the drip pan. The potatoes will be covered in cheesy, pork fatty goodness.

*Leftovers make great sandwiches. Thin-slice any pork you want to use in sandwiches, because the pork loin can be tough to bite through if it is cut too thick.

Inspired by:
Steven Raichlen How To Grill