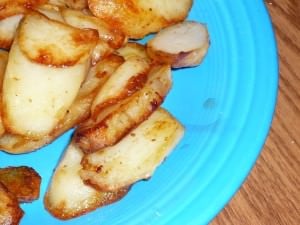 A year ago, my wonderful wife gave me a surprise present for my 40th birthday - a two week vacation, alone in France. The first week I took cooking classes in Provence, and the second week I wandered around Paris.*

*Yes, life was tough. My wife loves me very much. 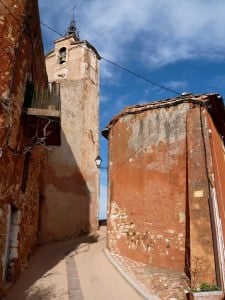 My week in Provence was the highlight of my trip. It was very early in the season, and due to a last minute scheduling change, I wound up being the only person in the class! I got to be a temporary local*. If you ever get a chance, visit Patrick Payet and Famous Provence here - you won't be disappointed.
*The picture on the left, the one of me smiling, with my hands covered in Cognac and lady fingers. was taken during this class.

One day, I got to spend the morning wandering around the market at L'Isle sur la Sorgue 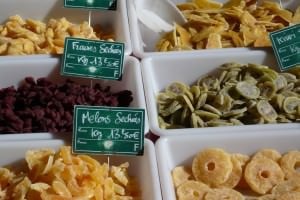 One of the things I saw there was a rotisserie chicken stall - they had a wall of chickens turning in front of a wall of propane - picture your local Boston Market's chicken cooker, but with a trailer hitch, being run by a man of middle-eastern heritage. It smelled heavenly. The interesting part to me was the potatoes - under all the spinning chicken was a sheet of foil, covered with sliced potatoes. They were browning from the heat of the fire, and soaking up the dripping juices from the chicken above. Being the rotisserie fanatic that I am, I knew I had to try this at home.

It turned out to be a lot harder than I thought it would - I couldn't get the potatoes to cook all the way through; they'd be nicely browned on the outside, but hard and undercooked inside. It wasn't until I saw a grilled potato recipe in Cook's Illustrated that involved pre-cooking the potatoes. The light bulb went on. Pre-cook the potatoes! Of course!
*Or, I think, you could slice them a lot thinner. Now that I think back to the rotisserie set up in the market, that may have been how they did it. I like the thick chunks of potato you get with the following method, though, so I haven't tried thin-slicing yet. 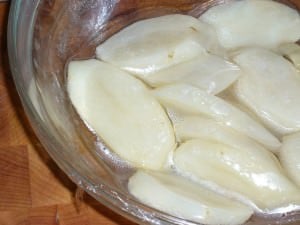 Directions:
1. Prep the potatoes: Put the sliced potatoes in a medium, microwave safe bowl. Toss the sliced potatoes with the salt, pepper and oil until evenly coated. Cover the bowl with plastic wrap, and microwave on high for 5 minutes. (You want the potatoes to be just starting to cook through - too soft and they'll disintegrate).
2. Start the rotisserie main course: Pick a rotisserie recipe, and get it started. (Some suggestions are here, here and here.) The key piece is the foil pan that catches the drippings under your main course - that's where the potatoes are going. 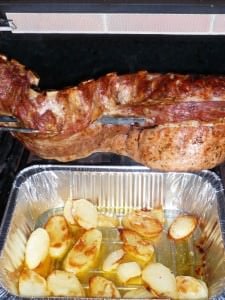 Potatoes under my rotisserie ribs

3. Cook the potatoes: Once you have the main course started, put the potatoes in the pan underneath it. You don't want to crowd the pan - the potatoes will steam instead of cooking. Cook with the grill lid closed, tossing the potatoes in the pan every 15 minutes or so until they're well browned, usually 30 to 45 minutes. (I shake the pan with my grill tongs, then rearrange the really brown pieces and the undercooked pieces as necessary. Be careful - don't puncture the pan, or you'll have dripping fat everywhere in your grill!)

4. Serve:Remove the potatoes to a platter, and serve with the main course.

Notes:
*This recipe should work with a mix of root vegetables, though I haven't tried it yet. Carrots and parsnips would go well with the potatoes, or as their own dish.

*Don't ask the calorie count on these potatoes. They're cooking in dripping fat. They taste great, but they're not exactly a good option if you're on a diet. Unless you have the willpower to eat only one... 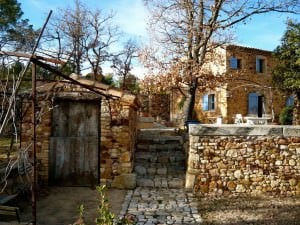