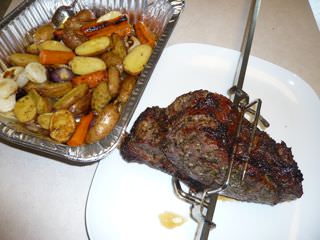 This is one of my first recipes, and is appropriate for a small roast - no bigger than 4 pounds. For a larger roast, see my Rotiserie Beef Prime Rib Roast recipe; for a boneless roast, see my Rotisserie Boneless Ribeye Roast with Garlic Crust recipe.

I'm a big fan of my rotisserie. My favorite recipe is using it to roast whole chickens - nothing else I've done gets the skin as crispy, and cooks the chicken as quickly, as my rotisserie on my Weber kettle grill

.When I saw Steven Raichlen cook an herbed beef rib roast using a rotisserie on his show, Barbecue U, I knew I had to try it.

What I didn't know is I'd spend the afternoon on Weather.com, trying to tell when the rain was going to stop.*
*"Hmm...the storm has moved (measuring on monitor with fingers) this much in the last hour, so that means it should move (measuring with fingers again) to about here...it's going to be close." 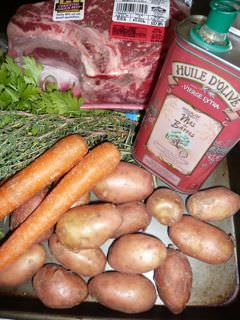 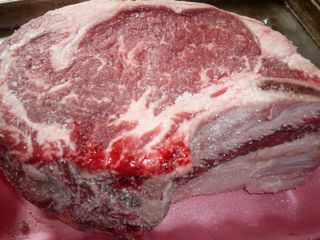 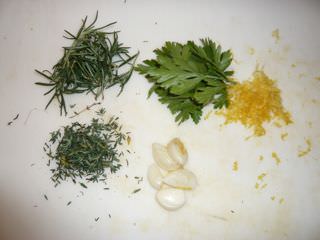 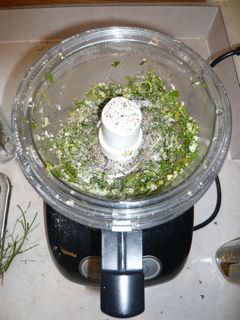 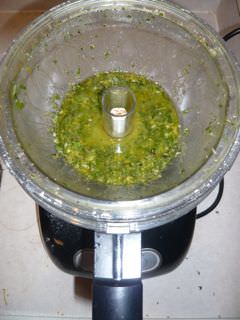 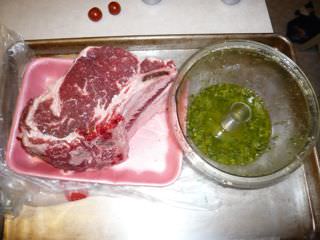 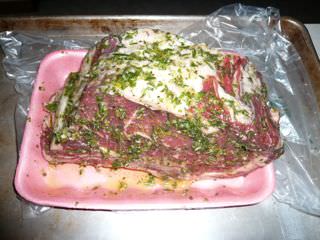 Skewer and Cook the roast: 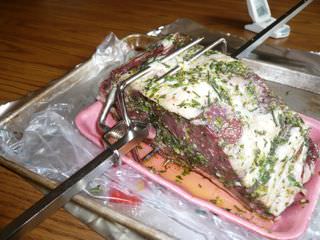 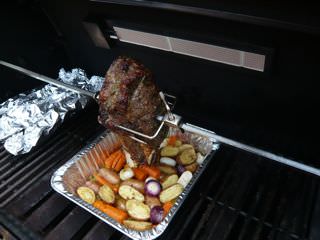 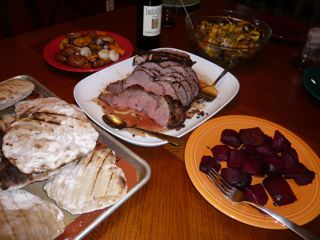 Notes:
*The herb crust on this roast was amazing. The end pieces were almost as good as the bones, which you won't hear too often from me. Next time, I'm going to use a trick I read in Cook's Illustrated: I'm going to cut the ribs off before I cook the roast, rub the paste on the roast an the ribs, then tie the ribs back on with some butcher's twine. That way, the paste gets onto an extra surface on the meat.
*You can cook this recipe with a bigger roast; I was only serving the five of us, and we had a lot of leftovers.  That being said, I would consider getting two 2-3 bone roasts instead of one big one.  The browned herb crust you get from the rotisserie is why you want to cook a beef roast this way, and you get more surface area with two roasts then you would get with one big one.
*I'm going to check the temperature more often. Meduim. I can't believe I overcooked it.
*The spit conducts heat into the middle of the roast, which results in it cooking quicker than it would if you were just roasting it.  If you like your meat rare, or medium-rare, keep checking it, and make sure you get it off the spit as soon as the roast is off the grill.
*If you're worried about food safety, keep the roast in the refrigerator while it rests with the salt, and with the paste. I kept it out of the refrigerator after I salted it, since I've read that two hours is safe. Also, it's a big roast - it needed the two hours to come up to room temperature.
*The rib roast will cook more evenly if it's at room temperature before you start cooking it. By evenly, I mean that the inside of the meat will all be the same doneness - you won't have a little "medium rare" ring in the middle, with gradations to well done before you get to the edge - it will have a much larger medium rare section in the middle, with just a little ring at the edge going to well done.
*This is obviously a "sunday dinner" type meal - it takes a while to prepare. We're having leftover roast beef sandwiches later in the week, though. Mmmm...beef with horseradish sauce...I'm drooling again.
*You don't need the food processor for the paste, but it makes it easier. If you don't have one, or don't want to use it, mince the garlic, herbs, and lemon zest, add the salt and pepper, then mix with the olive oil.

*The herbs are variable - just try to get the total volume right. Use whatever you've got available-thyme, rosemary, chives, scallions, parsley... The only one I wouldn't use too much of is the rosemary - it has a very strong taste.

*Rib roast is "prime rib", but if it's not Prime meat, then it's not Prime Rib.
(That didn't come out right. Let me try again.)
*Rib roast is the cut of beef that ribeyes come from, and that Prime Rib comes from. But it should only be called Prime Rib if the meat is USDA Prime grade meat. If not Prime grade, it should be called a rib roast. And since choice grade is pretty good, and doesn't cost its weight in gold (or oil?), that's usually what I buy for roasts.
*Due to the weather, I went with my gas grill with its infrared rotisserie burner. I prefer the taste of the charcoal grill, but this worked well with the gas grill, so I won't complain.
**OK, maybe a little. Curse you!  Curse you, "30 percent chance of afternoon thunderstorms!" Why do you always have to rain between 4 and 6PM, and then clear up so I can see how nice it is after I can't grill any more?!?!
Questions? Comments?  Other ideas? Leave them in the comments section below.
Related Posts:
Click here for my Rotisserie Beef Prime Rib recipe.
Click here for my Rotisserie Beef Tenderloin recipe.
Click here for my rotisserie pan root vegetables recipe.  (You see them under the roast in the pictures above.)
Click here for my other rotisserie recipes.
Recipe inspired by Steven Raichlen's: Primal Grill: One Good Turn. [primalgrill.org]