I’ve been avoiding this post. 1I’m terrible about procrastinating. Hey, I know, I’ll clean the kitchen instead of writing! Let’s do another test on that recipe. Let’s…vacuum the cat? There’s got to be something else I need to do around here.

Why was I procrastinating? Because this post scares me. With this post, I enter the cast iron holy wars. 2Stops, puts on helmet with crossguard, pulls on chain mail gauntlets. Tries to type. Takes gauntlets off, wiggles helmet to get it to fit better, continues typing.

Cast iron is high maintenance, and tricky to care for - until you get used to it. My first few attempts to use cast iron were ugly. Flaking, sticky, rusty - you name it, it went wrong. This is pretty common - everyone struggles with cast iron at first, especially if they don’t use the pan a lot. When people find a technique that works, they think “that’s it! I’ve found the one true grail of caring for cast iron!” They become a cast iron proselytizer, spreading the gospel of their method of cast iron care.

Or, even worse, cast iron care is passed down generation to generation, like a family heirloom. “Of course we do it this way. That’s how Mom learned it from Grandma. Are you insulting Grandma?”

The problem with all this is: cast iron care really isn’t that difficult. The most important thing is to use the pan. If a pan is used regularly, with a light coating of oil, and a good cleaning every now and again, it will season itself. Seasoning improves over time - months instead of days, years instead of months. Everything else is just details - including (gulp) what I’m about to say. I hope I haven’t joined one of the cast iron cults…but as you’ll see, I also have Strongly Held Beliefs about what works and what doesn’t. That doesn't mean that other methods don't work - they proabably work fine, as long as the pan is used reguarly. In other words, please don’t picket my house with “Follow the one true black iron! Death to the cast iron unbeliever!“ signs. If it's working for you, good. Keep doing it. 3Also, please don’t leave ”Are you talking trash about my grandma!?!" comments. Really, Grandma is wonderful. I love her. Everyone loves her. Please don’t hurt me.

Here’s the general idea of cast iron seasoning: at a microscopic layer, cast iron is very porous. Oil gets in those pores, and when an unsaturated oil is heated past its smoke point, it polymerizes into a hard, slick layer on top of the iron. That layer is the seasoning, and it’s exactly what we’re looking for. (Want more science info? Check out these great posts by David Arnold and Kenji Alt).

Enough preamble: here’s how I season a cast iron pan.

Clean the and dry the cast iron pan - wipe it dry, then set it over a lit burner until it is bone dry.
Using a folded paper towel, rub the pan with a thin coat of unsaturated oil. Then, with a new paper towel, buff the pan until it looks dry, as if all the oil was wiped off. (It wasn’t - there’s still a thin layer of oil on there.) Turn the pan upside down and slide it into a 500°F oven; bake it for 1 hour, then turn off the oven and let the pan cool in the oven for an hour or two.

Repeat the process. How many times? For a new pan, I do it as many times as I can can stand it - I like to go for at least six rounds of seasoning when I get a pan home from the store. I set my oven to time bake at 500°F for an hour, oil the pan, slide it in there, and set my kitchen timer for three hours. When the timer goes off, the oven will be cooled down enough to handle the pan; then I repeat the process, again and again. I do a layer of seasoning right before I go to bed, then another one when I get up in the morning. Two days worth of seasoning and I consider the pan ready to use.

Then, the most important part: use the pan. The layer of seasoning is constantly evolving. The more the pan is used with oil or fat, the better. An oiled pan over medium heat, or in a hot oven? You’re building the seasoning. Cooking with liquids, especially simmering? The seasoning is wearing away. I try to avoid wet cooking in a pan until I think it has a strong layer of seasoning in it, but don’t baby the pan - keep using it, and over time the seasoning will build up.

After the initial rounds of seasoning, I re-season if I see something that looks wrong. A hint of metallic shine in the bumps on the surface of the pan, a sticky spot, the seasoning looking dry? Scrub the pan clean and do one more round of seasoning in the oven. (Maybe two rounds if it looks like it needs it.)

Q: What does Unsaturated Oil mean?

Pretty much any oil you can find in the grocery store. Soybean oil (aka “vegetable oil”) is the most unsaturated oil, but canola and corn oil are also good. Oh, and flaxseed oil, but that deserves its own question…

Q: What about flaxseed oil?

Ah, a Sheryl Canter loyalist? Welcome. Sheryl won the internet (cast iron care division) with her Chemistry of Cast Iron Seasoning: A Science-Based How-To post a few years ago. I love her basic technique: use high heat (500°F instead of 350°F) and wipe all the oil off of the pan (instead of leaving a thin layer of oil). As you just saw, it’s the basis of my seasoning technique. She’s a big fan of flaxseed oil, which is unsaturated, and works well on cast iron. But flaxseed oil is really, REALLY expensive. Like, “a bottle of flaxseed oil costs more than my cast iron pan ?” expensive. And it has to be refrigerated - it goes rancid very quickly at room temperature. And it smells fishy when you heat it to cast iron seasoning temperatures.4My kids always complain when they see me seasoning a pan, because they equate it with the fishy smell.
Does flaxseed work better than other oils? From my experience, no. I bought a 10 inch skillet and a 10 inch griddle and went through the seasoning process with both, then used them for cooking. I could never tell a difference between the two.

Ms. Canter touts the fact that flaxseed is a drying oil, and again, I use it, and it works fine. But, most of the seasoning on a pan forms during actual cooking - when you’re heating the pan with oil in it. You can’t cook with flaxseed oil, so over time, most of the seasoning is NOT flaxseed oil. I have a bottle of flaxseed oil in the fridge, and I paid a lot for it, so I’m using it up. But when it’s gone, I don’t think I will buy another one.

Q: What about Crisco?

Crisco is fine - it is mostly unsaturated, so it works for seasoning cast iron. Is it better than any of the oils listed above? No. Is it worse? Again, no. Use it if you have it on hand. (Or, if you’re a Crisco loyalist. Not that there’s anything wrong with that.)

Q: What about lard?

Grandma, is that you? Lard used to be the go-to fat for seasoning cast iron. Lard is relatively unsaturated when you compare it to the alternatives available before mechanical extraction of vegetable oil was developed. In other words, if your seasoning options were butter, schmaltz, tallow, olive oil, or lard, then lard is the obvious choice. Nowadays, vegetable oils are cheap and readily available, so they are a better choice. That said, cooking fatty pork in a cast iron pan will always help the seasoning. If you have easy access to lard, go ahead and use it.

Q: How much oil do I need to season a pan?

Not much, but it depends on the pan. For my cast iron skillet, I pour about a tablespoon into the pan and wipe it around until the top side of the pan looks wet. Then I flip the pan over, pour a teaspoon or so on the logo on the back, and spread it over the back and sides. (Don’t forget the handle!) Then I wipe the pan clean. Oh, and if you get a bare cast iron pan, it will suck up the oil - add as much oil as it needs to look wet and slick, then buff it until it looks dry.

They’re OK, and better than starting with bare iron, but they need more seasoning. My “two days of seasoning” process starts with a pre-seasoned pan. 5If I get an unseasoned pan, or have to strip a pan down to bare metal, it takes about six layers of seasoning to get to store bought pre-seasoned levels. If you’re itching to use your new pan, you’ll be OK as long as you use a thin layer of oil and cook relatively fatty foods. Don’t start with a pan sauce, scrambled eggs, or sausage gravy without building up a thicker layer of seasoning first.

Q: My paper towels leave lint all over the pan when I try to oil them. Help!

I have good luck with Bounty paper towels - they seem to shed less than other brands. I recently learned about blue Scott Shop Towels from Jeffrey B. Rogers, The Culianry Fanatic on YouTube.6Oh, boy, does he know cast iron - he owns so much cast iron that he could forge his own battleship. The shop towels are great - they don’t shed lint until they’re already falling apart - but they don’t work as well as general paper towels for kitchen cleanup.

Q: How do I keep my cast iron clean?

Cast iron questions? Any other cast iron topics I should cover? Anything I left out? Strident defenses of flaxseed oil, Crisco, or Grandma’s lard? Talk about it in the comments section, below. 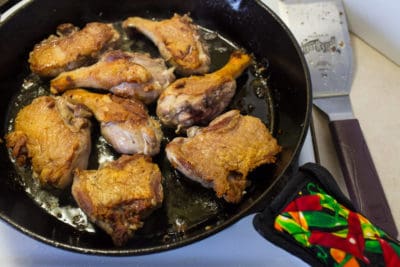