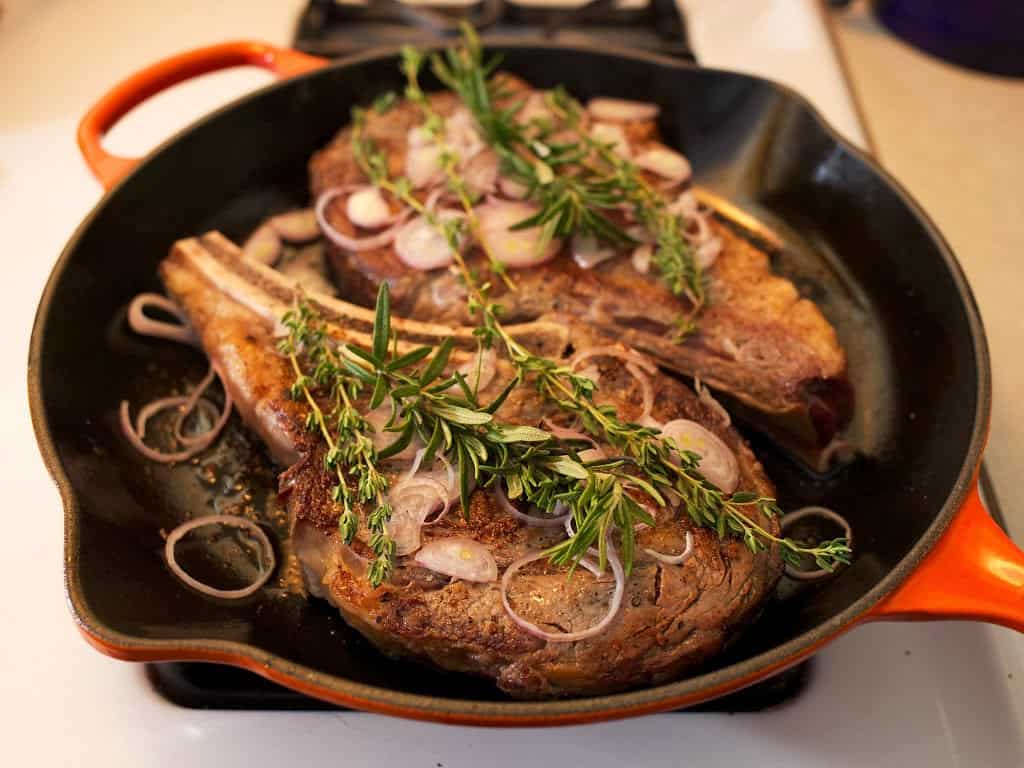 I was chatting with the manager of my local Le Creuset store about cast iron skillets, and she asked if I wanted to see a video of the pan in action.

A ribeye was searing in the skillet. The chef covered it with herbs and garlic and slid it into the oven. When the steak was done, he moved it back to the stovetop and finished with a butter baste. I was mesmerized, watching him spoon sizzling butter over the ribeye.

The manager knew she had me - I’m pretty sure I stopped talking in the middle of a sentence, jaw hanging open, staring at butter basted beef. The next thing I remember, I’m walking out of the store with a very heavy box under my arm.

I came home and duplicated the recipe - and I regret nothing. It’s every bit as good as it looked on the video.

One hour before cooking, remove the steak from the refrigerator, pat it dry with paper towels, and season it evenly with the salt and pepper. Let the steak sit at room temperature until it is time to sear.
You can salt up to two hours in advance. But, if you can’t salt at least an hour in advance, season the steak right before cooking. It needs at least an hour for the dry brine effect. 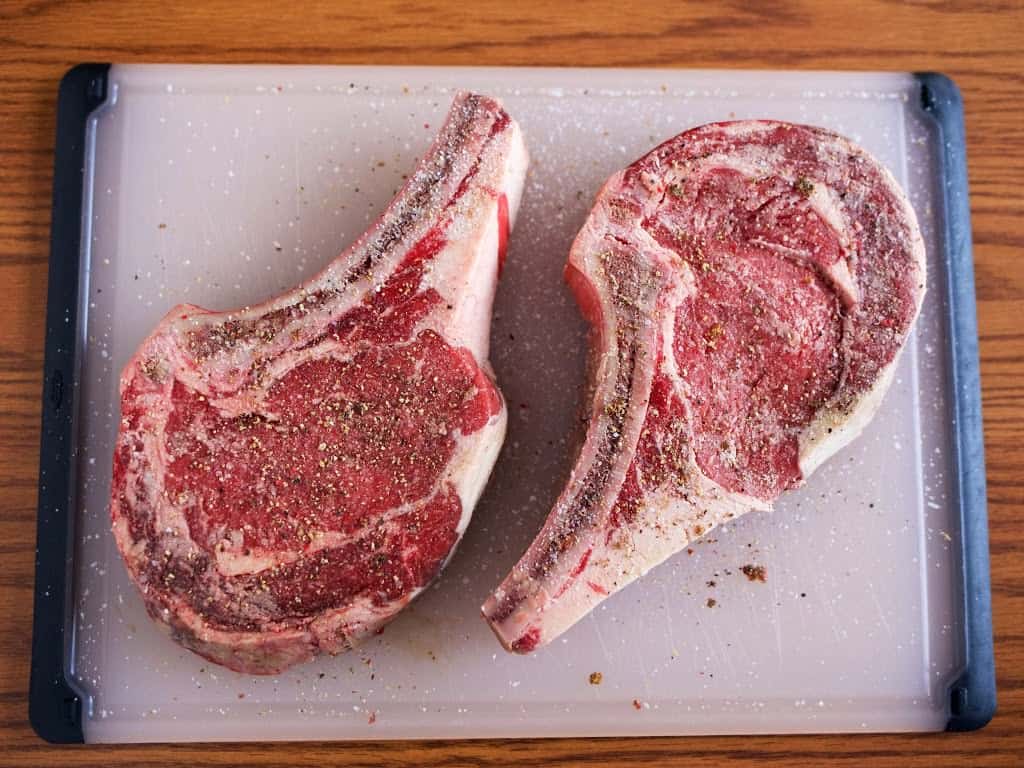 30 minutes before cooking, put the skillet in the oven and heat at 450°F to get the pan ripping hot. 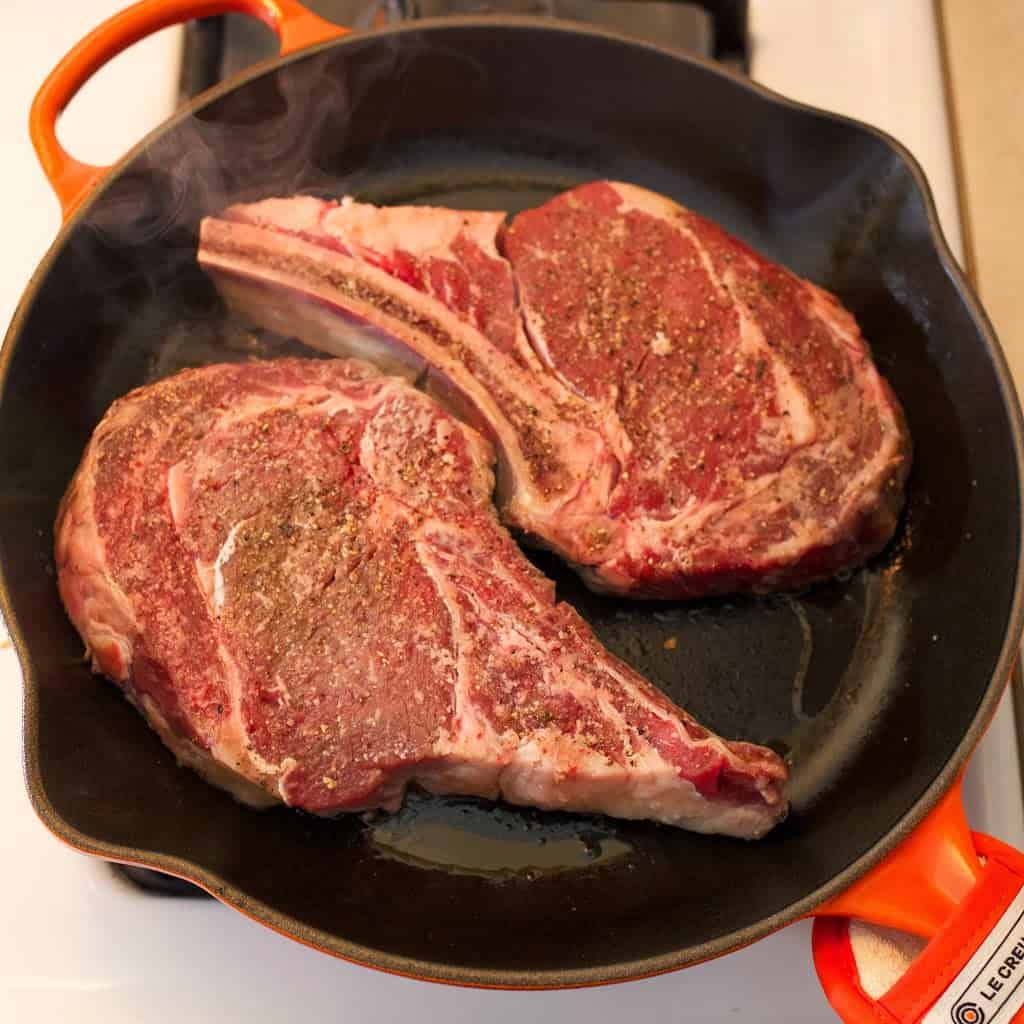 Move the pan from the oven to the stovetop and turn the burner to medium heat. (Carefully! The pan is hot!) Put the steak in the pan and sear without moving until a browned crust forms on the bottom, about four minutes. Flip the steak, and cover each steak with sliced shallots, two sprigs of thyme, and one sprig of rosemary. Move the pan back into the oven. 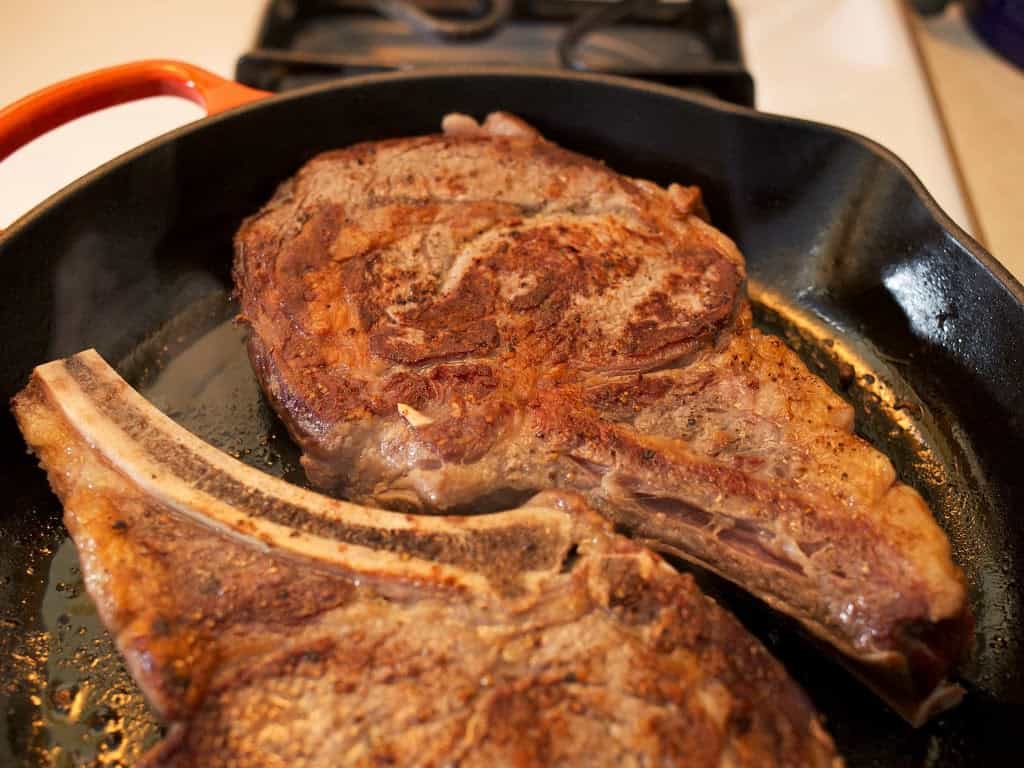 Roast the steak in the oven until the steak reaches an internal temperature of 105°F, about five minutes. 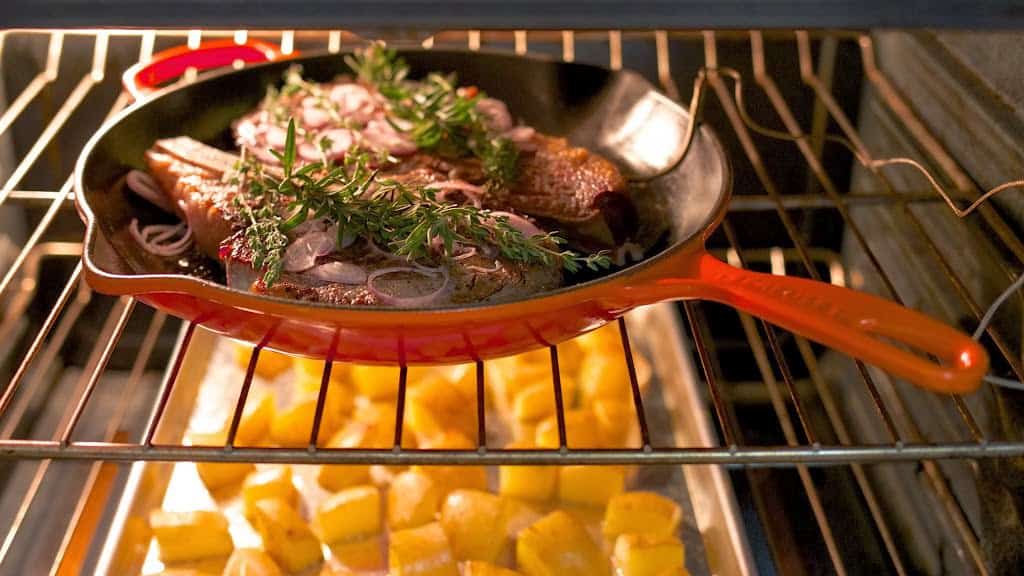 5. Baste the steaks with butter

Move the pan back to the stovetop over low heat. (Again, be careful, hot pan) Put the butter into the pan, between the steaks, Once the butter melts, scrape the shallots and herb sprigs off the steaks and into the butter. Use a spoon to baste the steaks with the butter, and cook the steaks until they reach an internal temperature of of 115°F to 120°F for medium-rare, about five minutes of basting. 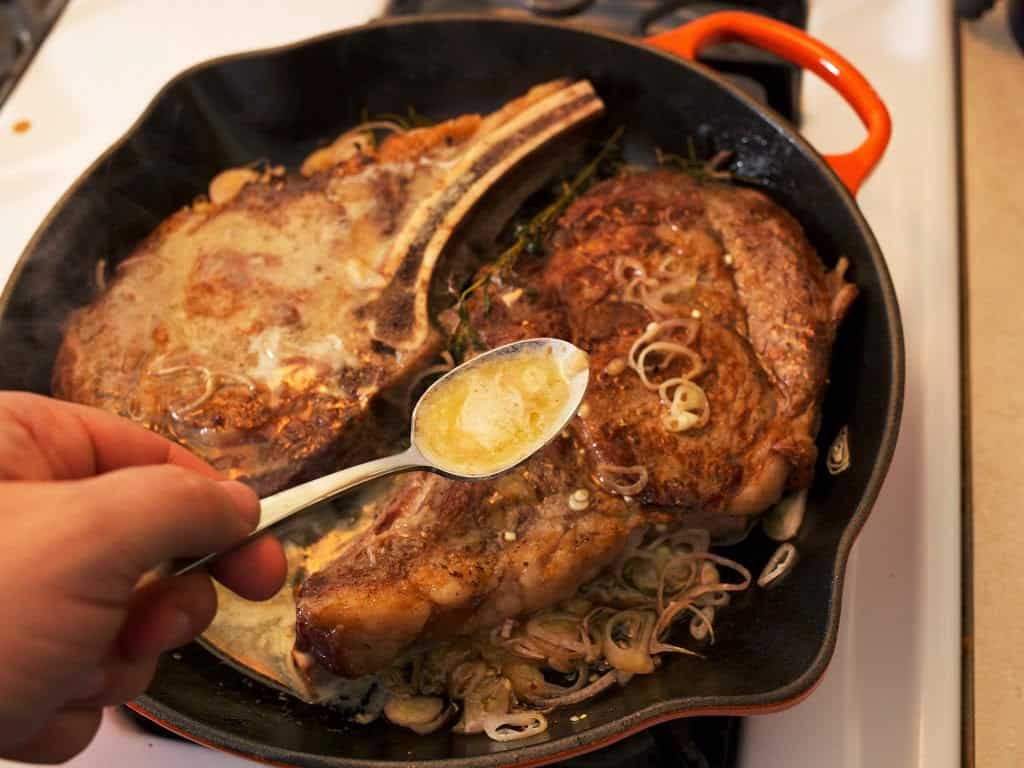 6. Brown the shallots and serve 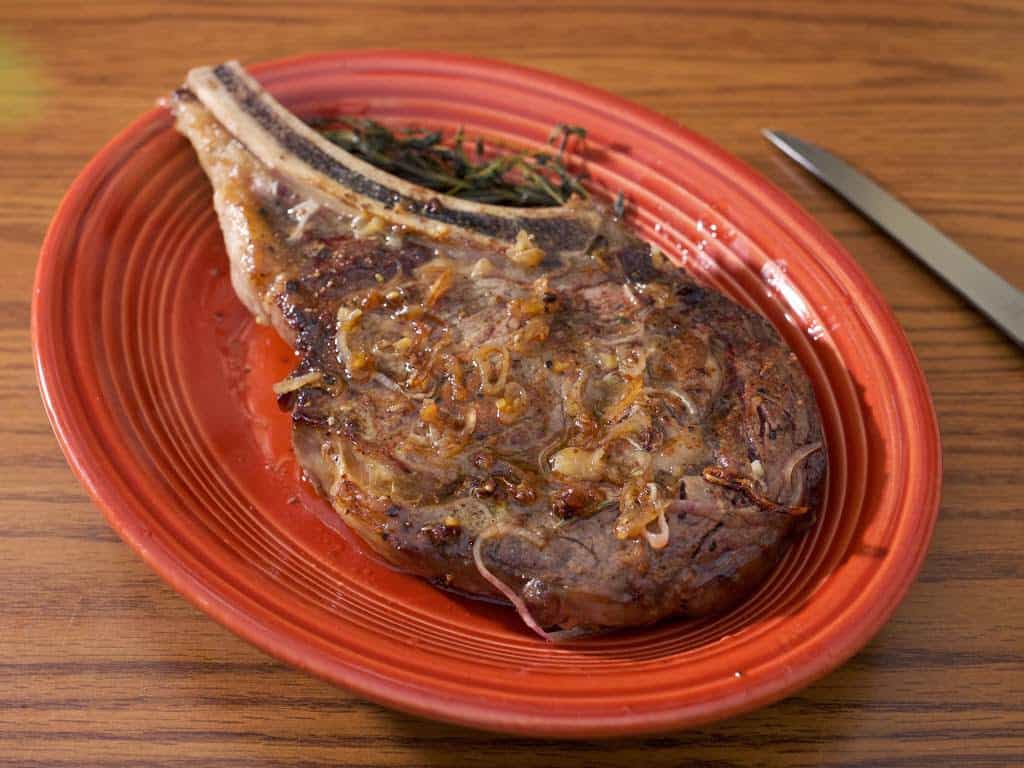 Enjoyed this post? Want to help out DadCooksDinner? Subscribe to DadCooksDinner using the RSS or Email options on the right, recommend DadCooksDinner to your friends, buy something from Amazon.com through the links on this site, or donate through my tip jar. Thank you.