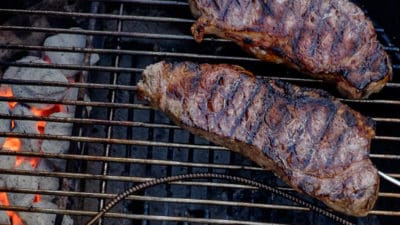 Sear and move is old school grilling, at least for me. It was the first trick all my grilling cookbooks mentioned – sear the steak over direct heat, then move it to an indirect heat part of the grill so it cooks through without burning.

As I said in yesterday’s Reverse Sear vs Sear and Move showdown, I prefer reverse searing nowadays…with a couple of exceptions, where sear and move is good enough.

First is: weeknight grilling. If I’m in a hurry to get dinner on the table, I’m going with sear and move. It takes half the time of a reverse sear.

The other exception is cooking for a crowd – especially one that wants a range of doneness, from Rare to Ruined Medium-well. That’s much easier to do with sear and move – sear all the steaks, move to indirect heat, put the thermometer in the one I want the most done, and pull steaks off the grill as my target temperatures pass.

My key piece of equipment is an instant read thermometer with a probe, like this one. The probe thermometer stays in the steak, and the unit stays outside the grill. No need to open the lid – I set the alarm, and it tells me when the steak is exactly where I want it. 125°F for medium rare, thank you very much.2If all you have is an instant read thermometer, without a remote probe, check the steak every three minutes. This will extend the cooking time a bit – every time you open the grill lid you’ll lose some heat – but not by much. I assume I’ll need an extra five minutes if I’m opening the lid a lot – but as always, go by the temperature, not the time.

So, ready for an old school beef experience? Grab some thick cut New York Strip steaks, and let’s get grilling. 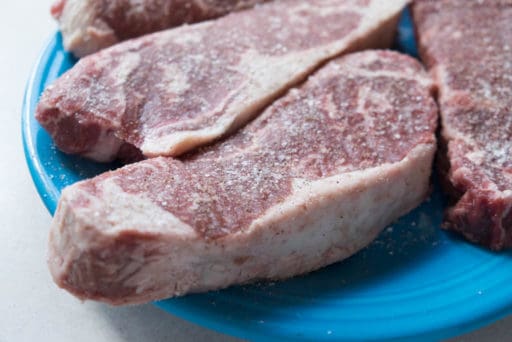 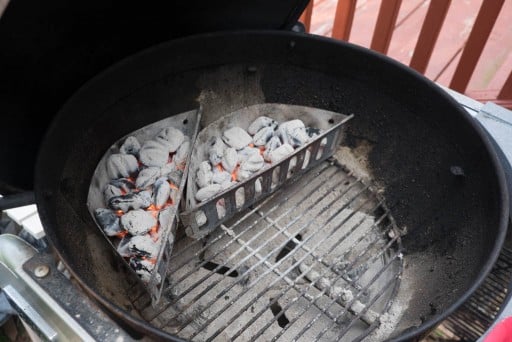 Indirect high heat – coals on one side of the grill 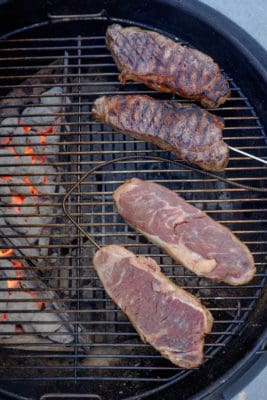 Sear and Move on the top – already seared, moved to the indirect heat side of the grill 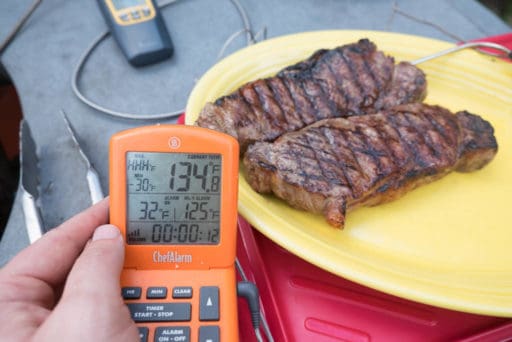 After resting, temperature drifting up to low 130s – right where we want it