Thank you to Certified Angus Beef for the New York Strip steaks used in this week’s posts.

I want my steak grilled, and cut thick. I want pink meat surrounded by a browned crust, with a hint of char at the edges. Thick steaks need special handling - don’t cook them over direct heat. The outside will burn before the inside reaches even the bloodiest rare.

Years ago, I learned the Sear and Move technique:

This is how I’ve cooked steaks for years, and it does give me that beautiful pink center, and a crackling brown crust. But…it also gives me a bulls-eye of doneness between the two. There is a band of gray surrounding the pink center. That didn’t bother me, until…sous vide came along.

I’m spoiled by sous vide steak, cooked to the exact temperature I want, edge to edge pink, with a sear on the outside.

Now I’m experimenting with the Reverse Sear method, simulating low and slow sous vide cooking on the grill by reversing the heat order of grilling:

Note that both methods rely on a good probe thermometer - don’t trust a steak to a ticking clock, and the uncertainty of a grills’ internal temperature. A thermometer is the only way to be sure. That said, probes can burn out in the heat of a grill. Unless your probes are rated for high temperatures, keep them away from the fire on the indirect side of the grill.

I’ve enjoyed my Reverse Sear steaks - I loved the even pink in the middle - but I noticed that I wasn’t getting quite the same grilled crust. And, they certainly seemed to take longer - sometimes much longer - to finish cooking. Is the reverse sear really worth it? That’s when a care package arrived from Certified Angus Beef - a box of four gorgeous New York Strip steaks. 1Gift steaks? I love being a food blogger. Time for a head to head test - what method reigns supreme?

I fired up my trusty Weber kettle, baskets of charcoal pushed to one side. The steaks go on the grill grate - two over the coals, two over indirect heat. 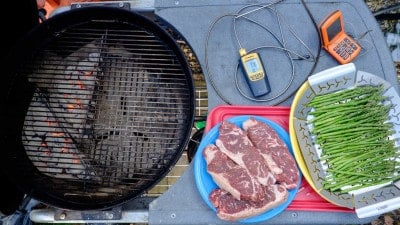 Here’s how they looked:

The Sear and Move steak was noticeably darker; its sear is a dark brown. The Reverse Sear was less seared - and the sear had a reddish-brown color. I let them rest for 15 minutes, then cut them open:

The Reverse Sear has more pink, but the Sear and Move steak was closer than I thought it would be - only a narrow band of gray around the outside, most noticeable on the top left.

…how do they taste?

Next comes the taste test - also known as Saturday night dinner. My wife, who loves the charred edges of steak, went directly for a Sear and Move piece. I tried them both. There was a distinct difference in flavor - the Reverse Sear steak was noticeably more tender, with a buttery flavor. 5Science aside: My understanding is the buttery flavor is because enzymes work on meat while it cooks, between 100°F and 120°F, tenderizing it as part of the cooking process. The longer you’re in that temperature range, the more tender the meat. Reverse Sear keeps it in that range for much longer, due to the slow rise to the finished temperature. Sear and Move, because it is already heated, moves through that range much faster. The Sear and Move steak had the charred crust, but the Reverse Sear crust isn’t bad. I was a fan of the Reverse Sear, and its combo of the buttery meat and browned crust . My wife, however, tried a piece of the Reverse Sear, said “mmm…that’s good”, and immediately went and demolished her Sear and Move steak. She wants an extra-charred crust more than the buttery interior. 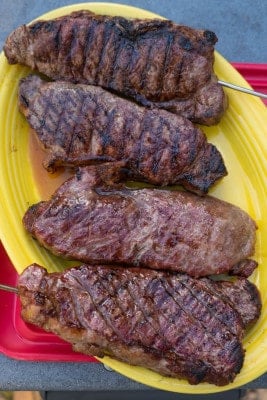 So, which is better? Um…it depends. Yes, I know, Mr. Wishy-Washy. But…it really does depend on what you’re looking for:

Sear and Move if you want…

Reverse Sear if you want…

Want to try both methods yourself? Stay tuned for later this week...

Questions? Other ideas? Favorite way you cook your steak? Talk about it in the comments section below.