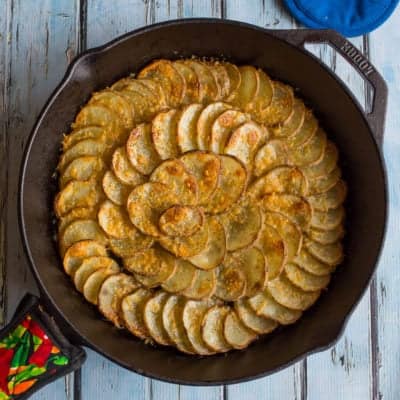 The picture of spiral skillet potatoes jumped out at me while I binge watched Jeffrey B. Rogers The Culinary Fanatic videos about cast iron pans. 3I’m telling you, if you’re a cast iron fan, don’t start watching those unless you have a few hours with nothing to do.

These potatoes look fantastic, and they taste even better. The kids are demanding them nightly – they love the crispy, almost potato chip edges that brown on the bottom of the skillet. 4I only make these potatoes every other week, because crispy potatoes bathed in butter are not exactly health food. It does get them to eat the potato skins, so I guess there are some benefits.

The spiral looks like a lot of work, but it’s easy to put together if you have a mandoline to do the thin slicing, or if your knife skills are impeccable. Now that I have the hang of spiraling the potatoes, I can slap this together in about five minutes flat. The trick is to take a big stack of potatoes, fan it out in your hand, and lay it in the pan, overlapping the last fan of potatoes. Repeat all the way around the edge of the pan until the outer ring is complete, then start the next ring. Repeat until the last ring fills the middle of the pan, and set one last potato slice in the middle. Then, go back and fill in any gaps with extra slices of potato. Sprinkle with salt and pepper, dot with butter, and it’s ready to go.

Inspired by Jeffrey B. Rogers Spiral Skillet Potatoes and the classic French recipe of Pommes Anna. 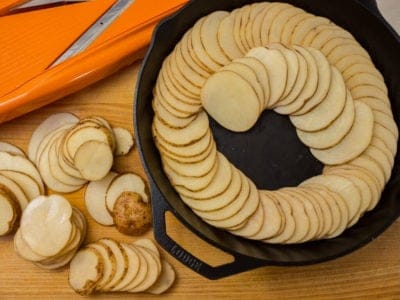 Arranging the potatoes in a spiral 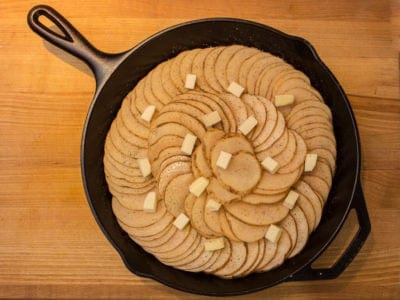 Dotted with butter, ready for the oven