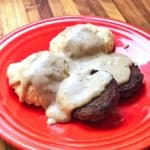 I've always enjoyed sausage gravy 4I live in Bob Evans' home state, after all. It's impossible to avoid. but I didn't start to obsess about it until a visit to Portland and Pine State Biscuits. 5Before then, the kids refused to try sausage gravy. What’s this white glop you’re pushing? Eat it? You’re kidding, right? Being on the road in Portland made them more adventurous than usual, so they tried it. Now they can’t get enough sausage gravy.

That trip made Sausage Gravy a regular at our Sunday breakfast table. After making it for months, I’ve found it just works better in cast iron. I don’t know why. Heavy duty steel or anodized aluminum pans do the job, but the recipe didn’t come together for me until I cooked it in cast iron. Maybe it’s tradition, maybe it’s the heavy metal, but I’m convinced I need a cast iron pan to do sausage gravy right.

Sausage gravy is barely a recipe - cook a pound of breakfast sausage, then toast flour in the fat and drippings left in the pan. Whisk in milk, and keep whisking until the lumps smooth out and the milk reduces in to a thick gravy. Add salt and (lots of) pepper to taste, and serve on top of biscuits. You can find this basic recipe - with a ratio of 1 pound of sausage, ¼ cup of flour, and 2 cups milk - everywhere on the internet. My big change? I double up on the gravy, because my family can’t get enough. I add a little extra vegetable oil to the drippings in the pan to make sure there’s enough fat, then use ½ cup of flour and 4 cups of milk. 6Yup, that’s it, my big addition to sausage gravy - making more of it.

Sausage Gravy in a cast iron skillet, made with the drippings from a pound of sausage. 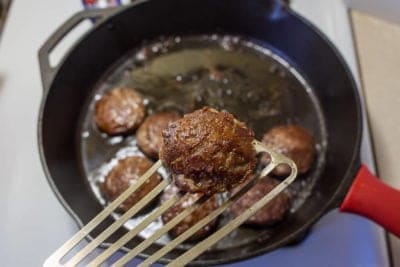 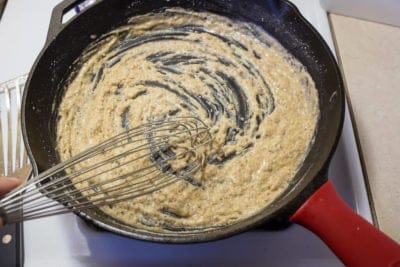 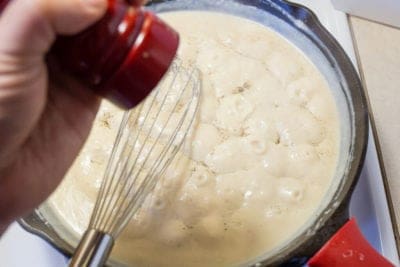