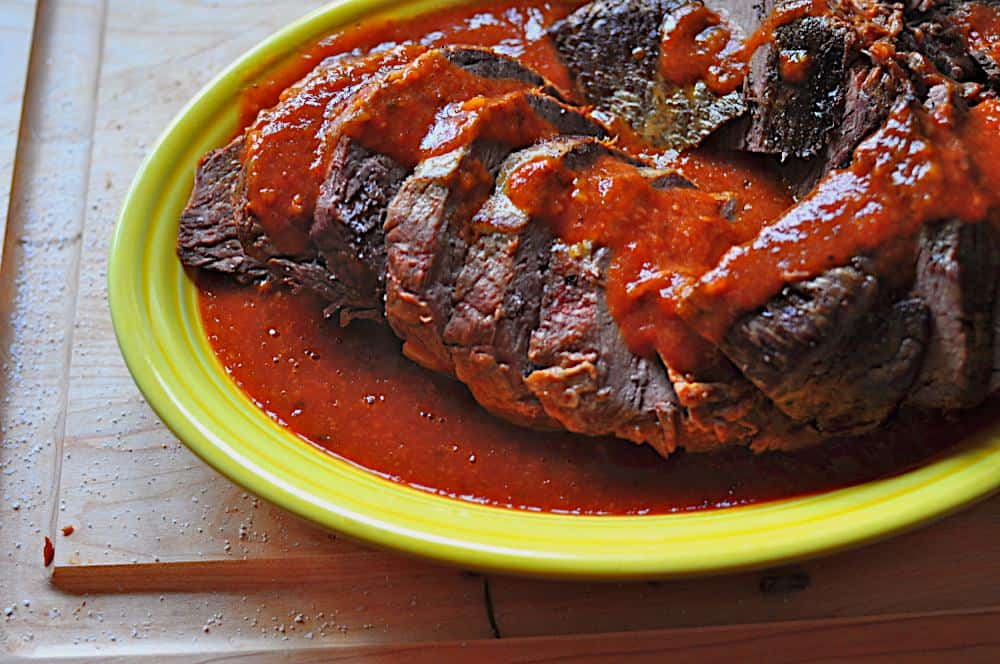 My recipe for slow cooker Italian pot roast evolved from a recipe in Cook's Country magazine. Cook's Country is part of the America's Test Kitchen empire, and the younger sibling of Cook's Illustrated magazine. I look forward to new issues of Cook's Country in large part because of their Slow Cooker column. It's fascinating to see what the...um...extraordinarily thorough* test kitchen has come up with. Cook's Country has slow cooker recipes that don't compromise flavor for ease of use.
*Sometimes they run off the rails in their quest for a perfect recipe. But I'm glad they're out there, pushing the envelope. Someone has to lead the fight against recipes with canned mushroom soup in them.

I was thrilled when they released Slow Cooker Revolution

This is a standard pot roast recipe, with a couple of tricks that help it out during the long, slow cooking. The roast and aromatics are browned, to add the depth and complexity that only comes from caramelization. Dried mushrooms, tomato paste, and a little soy sauce add meatiness to the dish. Slow cookers trap liquid, resulting in a watery sauce; minute tapioca thickens the sauce for us. Finally, I use my stick blender

to puree the sauce right in the slow cooker. The result is meltingly tender meat with a thick red sauce perfect for topping pasta. Enjoy!

Directions:
1. Prep the ingredients and brown the beef: To get the recipe in the slow cooker as quickly as possible, here is how I prepare the ingredients. The mushrooms need to soak, so the first thing is to rinse them off and get them into the hot tap water. Put a bowl on top of the mushrooms to keep them submerged. Next, put the oil in a large fry pan and heat over medium-high heat. While the oil is heating, sprinkle the beef with 2 teaspoons of salt and ½ teaspoon of pepper. When the oil starts shimmering, put the beef in the pan and sear for 3 minutes on two sides, a total of 6 minutes. While the beef is searing, prep the other vegetables. When the beef is done searing, move it to the slow cooker.

2. Saute the aromatics: Add the onions, ½ teaspoon of kosher salt, garlic cloves, tomato paste and red pepper flakes to the pan. Saute, stirring and scraping often, until the onions soften and the tomato paste is starting to brown, about 5 minutes. Stir in the reserved mushrooms and their liquid, crushed tomatoes, soy sauce, tapioca, oregano, thyme, rosemary, and bay leaf. Increase the heat to high, and bring to a simmer. Pour over the beef in the slow cooker.

3. Slow cook the beef: Cover and cook on low heat for 10 hours or high heat for 5 hours.

4. Slice, puree and serve: Remove the beef to a carving platter, leaving as much of the sauce behind as possible. Remove the herb sprigs and bay leaf from the crock pot, then use a stick blender to puree the sauce, about 3 minutes. (For big pieces like the mushrooms: trap them under the business end of the stick blender, then turn it on to break them up.) Taste the sauce, and add the sugar plus more salt and pepper if it needs it. Slice the beef into ½ inch slices; it's OK if it breaks up as you try to do this. Sprinkle the beef with a little more salt at this point, to season the inside of the meat. Move the meat a platter, spoon a couple ladles of sauce over the beef, and serve. Pass the rest of the sauce at the table (or use it to cover a pound of pasta).

Variations:
*Rustic sauce: skip the pureeing step; dice the dried mushrooms before adding them to the slow cooker.

*Shredded beef: instead of slicing, pull the beef into shreds with a pair of forks. Toss with 2 cups of the sauce.

Notes:
*I love serving this recipe with polenta, but the kids usually prefer pasta. Just make sure to have a starchy side like noodles, mashed potatoes or polenta to soak up the delicious sauce.

*This recipe makes a lot of beef and sauce. Freeze a quart or two, and when you need a quick dinner, reheat it and serve over pasta.

*Don't make my mistake; remove the herb sprigs and bay leaf BEFORE you try to puree the sauce. Whoops. It's hard to unwind your herb bundle from the shaft of the stick blender's blades when everyone is waiting for dinner...