My Memorial Day post was planned months ago - double cut pork chops, inspired by dinner at a local Italian restaurant. I have to kick off grilling season the right way, or I’ll get my food blogger license revoked.

Then spring sports season started, and I have been scrambling ever since. Saturday was going to be my big blog dinner until I realized the afternoon was a doubleheader, with me as the substitute coach for my daughter’s softball team. A leisurely dinner became: “quick, throw your cleats in the car, we have to pick up your brother and get to the grocery store for the pork chops!”

That’s OK - a quick brine, a hot fire, and double cut ribeye chops are ready in about a half an hour. You’ll have to special order these monsters - ask your butcher for double cut pork chops, or to cut a rack of pork every two bones, about 2 ½ to 3 inches thick. These are monster chops - each one is enough to feed two normal people; two of them fed my family of five, with a couple of picky eaters in the kids.

There is no way to cook this thick of a chop over direct heat; it would burn way before the inside finished cooking. Instead, I sear and move - sear the chops over direct heat, move them to indirect heat, and finish them slowly with the lid closed, brushing them with an Italian inspired honey glaze. I cook the chops until my probe thermometer reads 145°F plus a 3 minute rest. This makes them safe to eat, according to the new USDA guidelines. But with chops this thick, they need a longer rest - say 10 minutes - so the juices don’t come rushing out when I cut into the pork. 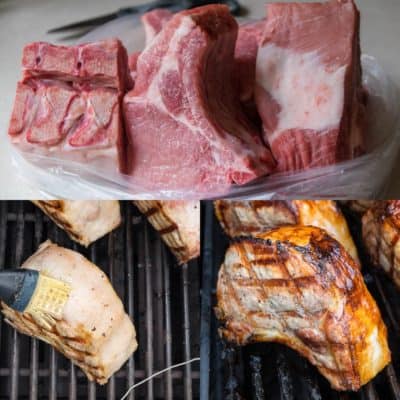