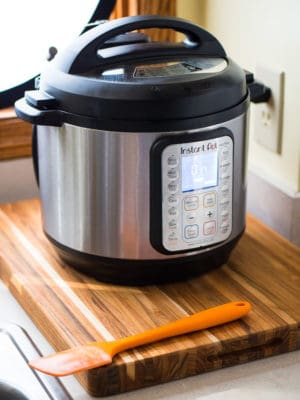 When I did the quick release I got a starchy spew with the steam that was released. Should I have let it rest a bit?

Short answer: Yes, you should let it rest a bit!

I get the “quick release is spraying more than steam” question from time to time. It’s usually from my Macaroni and Cheese recipe - more on why that is in a minute - and most of the other times are from a bean recipe.

It happens to me too! Most of the time with these recipes, a quick release just releases steam. But, sometimes I get more than steam - the pressure cooker starts spitting and sputtering, and I get a mess - a fine mist of the food spraying out with the steam.

Q: What should I do when my Instant Pot quick release is spraying starch?

A: Carefully close the pressure release valve, let the pressure come down for five minutes, and try again. Carefully! The steam (and the spitting liquid) are pressure-boiling hot. Protect your hands with a towel or an oven mitt. When you try again after five minutes, the vent will spit a little bit - that’s normal, as it clears out the valve. But, if it keeps spraying stuff, repeat the process - close the valve, wait five more minutes, then try again.

It may take a few tries to get a clean pressure release. It depends on how hot the pot still is. If I'm impatient, I'll keep trying to quick release every five minutes. If I have other things to do, I’ll give up, turn off the pot, and wait for the pressure to come down naturally.

Q: What’s going on? Is my pressure cooker malfunctioning?

A: No. This sometimes happens when you quick release a pressure cooker.

A couple of things could be happening when the valve is spraying more than steam:

Spraying food is usually a combination of both - a sudden, heavy boil of starchy liquid. The result is a boil-over, like on a stove. But the boil-over can only escape through the pressure valve in a messy spray.

The workaround is the same as on a stovetop boil-over. Reduce the heat and the boil will come down. Unfortunately, we’re dealing with a sealed pot. It takes time to cool down before we can try again.

The other solution? Take preventative measures, and don’t have a boil-over in the first place. There are three ways to avoid it:

Instant Pot FAQ
How to fix Instant Pot Overheating
Instant Pot as a Slow Cooker?
My other Pressure Cooker Recipes