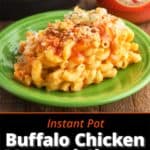 My kids haven’t been this excited about a blog recipe for a long time. As jaded teenagers with a food blogger dad, they have the world weary attitude of a hard-boiled detective. “Taco night? Let me tell you about that taco night back in ’12…”

This recipe is adapted from my most viewed recipe of all time, Pressure Cooker Macaroni and Cheese. Like that recipe, I pressure cook the noodles in just enough water, use evaporated milk to replace the thickening power of bechamel sauce, and stir in a lot of shredded cheddar at the end.

The difference is in the chicken and buffalo sauce. “Stir Fry Cut” chicken breast is my short cut from the grocery store, pre-sliced and ready for a quick sauté. Then it stays in the pot to finish cooking with the noodles.

Buffalo sauce is a simple, two ingredient recipe: butter and Franks RedHot sauce. I stir them in after the noodles are cooked, with the evaporated milk, and before melting the cheese. For the record, this recipe is not sponsored by Franks RedHot. The flavor of Franks and butter means “Buffalo Wings”, so it is the key ingredient for this recipe to taste right. (See the notes section of the recipe if all you have is a jar of “Buffalo Wing Sauce”, not straight Franks RedHot.)

The last step is optional, but a good one - I spread panko bread crumbs over the top of the mac and cheese, scatter crumbled blue cheese on top, and brown it in the oven. Now, if you’re anti-blue-cheese, you can skip it - the recipe will still be great - but I always have blue cheese with my buffalo chicken wings.

I portion leftovers into a 2-cup container, which will last in the refrigerator for a few days, and freeze for up to 6 months.