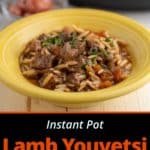 Have you ever tried Youvetsi? You braise the lamb shanks then throw in orzo near the end to soak up all the drippings. It’s really good.

Thanks, Aaron! This tip led me to youvetsi, the classic Greek lamb stew. Most of the recipes use cubed lamb shoulder instead of lamb shanks, so that’s where I went with this recipe.1 It’s my basic pressure cooker stew technique, so if you’ve made any of my stews, you’ll know the steps to the dance. The details are in the ingredients - lamb as the protein, with Greek flavors in the aromatics (onions, garlic, and tomatoes), and in the spices (oregano, allspice, and cinnamon).

And, of course, the orzo. Pressure cooked stews have thin sauces, because the sealed cooker doesn’t allow evaporation. The orzo takes care of that, soaking up some of the sauce, thickening the stew, and turning this into a great one-pot meal. Add a Greek salad and some pita bread, and you’ve got a fantastic Greek feast.