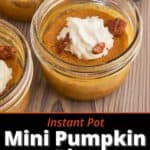 If you’ve ever followed one of my Instant Pot cheesecake recipes, this recipe is going to look familiar. (Like so many recipes, knowing the basic technique is most of the battle.) The only difference is the time under pressure; the pumpkin filling needs more time than cream cheese does to cook through.

I will be testing a full-sized pie in my springform pan in the near future, but I wanted to start with single serving size pumpkin pies. They seemed appropriate for the smaller Thanksgiving we’re going to have this year. And, I thought that I could freeze some of them for later. That was until the swarm of locusts - also known as my kids - descended on the kitchen and left nothing but a pile of empty canning jars stacked up in the sink. Oh, well, at least I know that theoretically I can freeze them for later…

Looking for some single serving pies for the holidays? Or to stash away as a snack? Or for a way to show off the versatility of your pressure cooker? These mini pumpkin pies are for you.

Instant Pot Mini Pumpkin Pies. Pressure cooker magic - mini pumpkin pies steam-baked in my Instant Pot, a taste of fall in about a half an hour.

Don’t have 2 pressure cooker racks? Like to live dangerously? You can – oh, so carefully – stack the second layer of jars on the first layer.

Don’t want to eat these pies all at once? They freeze for up to six months. Let them thaw overnight, then dig in and enjoy.

2 pressure cooker racks - I use this Pressure Cooker Bakeware Sling as the bottom rack, and the metal rack that came with my cooker as the top rack