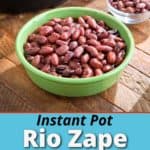 Instant Pot Rio Zape Beans. A classic heirloom bean from the Southwest, dry Rio Zape beans are cooked in about an hour thanks to my pressure cooker.

Rancho Gordo would not exist without Rio Zape beans.

(I broke out in a sweat writing that sentence - I can’t imagine life without my Rancho Gordo bean box.)

This is the bean that started the whole thing! I was eating a bowl of simply cooked Rio Zapes and I was just bowled over. The flavor was reminiscent of pintos but there was so much more going on. I could detect traces of coffee and chocolate and the velvety texture was like nothing else. I was sold on heirloom varieties after just one bite.

As I’ve said many times before, I love Rancho Gordo, so I’m grateful Mr. Sando had his bowl of beans. His heirloom beans have inspired many of my recipes, like Instant Pot Ayocote Negro Beans, Instant Pot Yellow Eye Beans, and Instant Pot Scarlet Runner Beans

The history of the Rio Zape bean

Food History Digression! Rio Zape beans were found in the Ancestral Pueblo cliff dwellings of the Zuni Pueblo, New Mexico, in 1935. (It’s also known as the Hopi string bean.) Then, in the 1960s, archaeologists also found them in the excavation of a sealed tomb in Rio Zape, Durango, Mexico. The beans were sealed in the tomb in about 600 AD, and were still in good enough condition to be identified. (The tomb has an amazing name: La Cueva de los Muertos Chiquitos, “The cave of the little dead”.) We’re cooking a truly heirloom bean, one that has been in the North American Southwest for centuries.

Pressure cook all the beans

I get the "to soak, or not to soak?" question all the the time.

I don't soak my Rio Zape beans in this basic recipe. They don't need an overnight soak, and cook to tenderness with 35 minutes at high pressure.

That doesn't mean you can't soak the beans. They turn out fine, though the bean broth isn't quite as full bodied. Soaked beans cook much quicker, 15 minutes at high pressure. I use that if I'm cooking the beans with other ingredients, where the shorter cooking time keeps me from overcooking the whole dish just to get the beans tender.

This is a simple dried bean recipe, so the ingredients list is pretty basic

Rio Zape beans can be hard to find. If you come across Hopi Purple string beans, they’re the same bean. A good substitute is pinto beans.

Don’t have onions or bay leaf? You can substitute a pinch of dried thyme for the bay leaf (or skip it), or a few unpeeled garlic cloves for the onion (or skip it).

Cooking in broth: This is the big one. Replace some or all of the water with broth for an ultra-rich pot of beans. Of course, I prefer a homemade Instant Pot Chicken Back Broth, or Instant Pot Vegetable Broth for the vegetarians and vegans out there. If you use store-bought broth, I recommend reduced-sodium broth, and skipping the salt in the recipe.

This Rio Zape recipe is straightforward, because I like a simple pot of beans.

A 6-quart pressure cooker. Pressure cooker dried beans are one of the key reasons I became a pressure cooker convert. Try them - you'll never go back to canned beans. (OK, maybe you will, for convenience - but see the Storage section for tips)

What to serve with this recipe

Rio Zape beans are a southwest classic, and a bowl of brothy beans are a great side dish with any Tex-Mex or Norteno Mexican meal. I particularly love having them with tacos.

Instant Pot Rio Zape Beans. A classic heirloom bean from the Southwest, ready in about an hour thanks to pressure cooking.

A 2-cup container of beans, with cooking liquid, replaces a 15-ounce can of beans from the grocery store. They'll last in the refrigerator for a few days, and freeze for up to 6 months. I always make extra beans, and freeze the leftovers for use in other recipes. Freezer beans are ready to use with about 5 minutes in the microwave, and are so much better than canned.