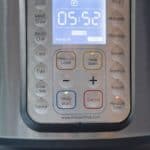 Can you safely delay cooking for any length of time without Bacteria growth? Say I want to fill my Instant Pot with Chicken and delay it’s cook time to my return home 9 hours later. That chicken just sits at room temperature all day. What is the guideline so I don’t make my family sick?

Don’t use delayed start to cook meat, poultry, seafood, eggs, or produce. In other words, any food that needs refrigeration.

The Feds. The US Food and Drug Administration’s recommendation for food storage is:

Are You Storing Food Safely? [FDA.gov]

A little more information for you in case you’re still thinking about delayed cooking. Bacteria love temperatures between 40°F and 140°F; that’s where they multiply. The warmer it is, the quicker they multiply. That’s why, at 90°F, the safety zone is only 1 hour.

Also, these times are all about risk management. Are you going to be fine if you leave food at room temperature for two hours, but at 2:01 suddenly you get The Death Bacteria? No, of course not. Maybe you’ll be fine. But the odds turn against you after 2 hours. Do you feel lucky?

And, if you want to delay cooking for less than two hours for convenience reasons, you’re probably fine. (I start cooking immediately and let keep warm mode do its job, but that’s just how I roll.)

Won’t Pressure Cooking kill all the bacteria in the food?

Medical journals say: If you need to sterilize surgical tools, and you don’t have a steam autoclave available, a home pressure cooker can do the job. Pressure steaming sterilizes medical tools after 30 minutes at 15psi. (They explain this with wonderful terms like “Thermal Death Time”.)

Canning meat is also well studied - according to the National Center for Home Food Preparation, you can preserve quart jars of cubed meat by pressure canning at 11psi for 90 minutes.

Hmm. The numbers look like they should work in an Instant Pot. Electric pressure cookers run at roughly 12psi, so I can sterilize 1 quart of food after 90 minutes at high pressure, right?

I’m not cooking 1 quart of food. If I am, I’m not cooking it for anywhere close to 90 minutes. I’m not going to kill all the bacteria that multiplied while the food sat for hours in the danger zone.

Now, here’s another problem. Let’s say you get lucky, and pressure cook the food long enough to kill all the bacteria in it. You’re good, right? Well, yes…from a safety point of view.

The problem is: we have to worry about more than just illness bacteria. Spoilage is also caused by bacteria, multiplying away on room temperature food. The rancid smell and awful taste of food that’s gone bad? That’s from spoilage bacteria. And that rancid smell and awful taste don’t go away, even when the bacteria is killed. Spoiled food is spoiled food, and the longer it sits in the danger zone, the more likely it is to go bad.

I hate to say spoilage is the real issue with leaving food out all day before cooking. Food-borne illness is Bad News, and I don’t think you should play 3-Card Monte with your health. But…in the comment above. I’m pretty sure chicken left at room temperature all day is going to taste off, no matter how long I pressure cook it.

Please, don’t do it. Let’s be careful out there.

What can I cook in my Instant Pot with Delay Start mode?

If you delay starting (for more than an hour), it has to be something that doesn’t need refrigeration. That sounds like…beans, potatoes, and rice. And not much else. Even then, if I soak beans overnight, I drain the soaking water and replace it with fresh water. And soaking potatoes and rice seem like they’ll just give me a soggy mess. Maybe if you put vegetables (like green beans) above the level of the water, in a steamer rack? Beyond that…I can’t think of anything where a long delayed start is safe or useful.

Personally? I don’t use Delay Start. I don't use a Crock Pot for the same reason. I’m not a morning person. Slow cooking and delayed start cooking mean I have to get out of bed a few precious minutes earlier...and that's not happening. I love my Instant Pot because pressure cooking fits my lifestyle. I get home from work and the pressure cooker squeezes time for me, fitting a long-cooked stew in before dinner.

If you use Delay Start, tell me about it in the comments. How are you using it? What are you cooking with a delayed start?