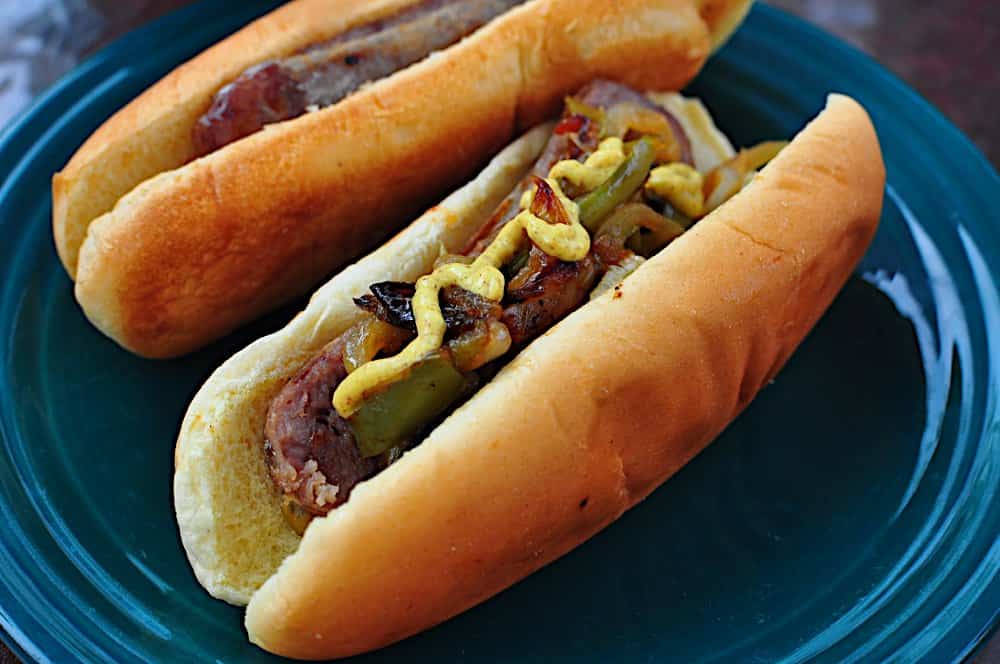 My family tree has roots in Wisconsin. Brats are in my blood.
*I grew up here in Ohio, but I was born in the University of Wisconsin Hospital.

I love brats, especially with peppers and onions. Now, I know this is sacrilegious, but the Sheboygan "beer bath" technique…it has some issues. Don't get me wrong, it turns out great brats. But the onions are just there to flavor the beer bath; they are not worth serving with the bratwurst.

That's why I use the technique in this recipe. I cook the brats in a sealed pan, on a bed of onions and peppers, with only the slightest amount of beer added. The peppers and onions are cooked to perfection in the fat that escaped the brats. I love these peppers and onions; they are the star of the show, almost better than the brats themselves.

The brats are cooked in the steam from the pan, then crisped up on the exterior over the heat of the grill. This avoids the huge flare-ups that come from direct grilling sausages. Sure, there will be flare-ups, but the brats are already cooked through; just move them off the heat until the flare-up dies down. 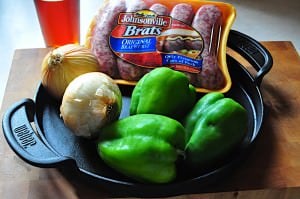 Directions:
1. Prepare the pan: Toss the onions, peppers, salt, and pepper in the grill pan. Drizzle with the oil and toss again to coat, then spread into an even layer across the bottom of the pan. Put the brats on top of the peppers and onions, then pour the beer over everything. Cover the pan with aluminum foil and crimp the edges shut. 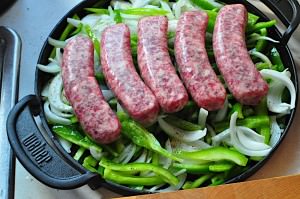 2. Prepare the grill: Set the grill up for cooking on direct medium heat. For my Weber Summit, I preheat the grill for 15 minutes with all burners on high, scrape the grates clean with my grill brush, then turn all the burners down to medium.

3. Steam the brat pan: Put the sealed pan on the grill over direct medium heat. Cook with the lid closed for 20 minutes. 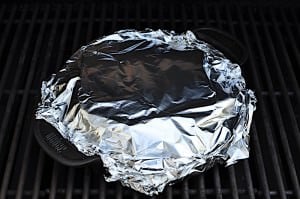 4. Grill the brats, brown the peppers and onions: Remove the foil from the pan, and leave the pan over medium heat. Move the brats from the pan to the grill, also over direct medium heat. Grill the brats for 2 minutes a side, or until browned, then remove from the grill directly into the waiting buns. Watch out for flare-ups while the brats are over direct heat, and move them around as necessary. While grilling the brats, keep cooking the onions and peppers in the pan, stirring occasionally. The peppers and onions are done when they are tender, and most of the liquid is cooked away, about 10 minutes after the foil was removed. 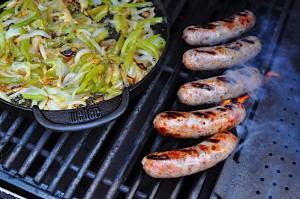 5. Serve: Pass the brats in the buns, with the onions, peppers, and brown spicy mustard on the side. 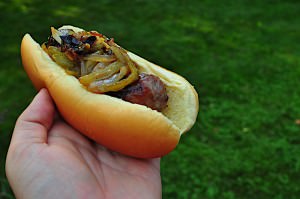 Variations:
*Frozen Brats: If I forget to take the brats out of the freezer, that's OK, this recipe can cover for me. Increase the beer to ½ cup, and in step 3, increase the covered cooking time to 25 minutes. (I double-check the brats to make sure they are at least 160*F internal when I start with frozen.)

*Change up the sausage: Brats are my favorite, but this technique works with any uncooked sausage. Italian sausage, peppers and onions is another killer combination.

Notes:
*If you have a local meat market that makes their own brats, great! I'm partial to Johnsonville brats, myself. It must be my Wisconsin heritage.

*I'm a traditionalist - top the brats with peppers, onions, and brown spicy mustard. Anything else would be...uncivilized.

*A trick for feeding the kids - I cut the brats in half before putting them in a bun, to stretch the 5 brats in a package out to 10 full buns. Ben can rip through three or four brats on his own; this trick leaves brats for the rest of us to get a bite in edgewise.

*This technique is great when cooking for a crowd; it doubles or triples easily. All you need is a larger pan; a 13x19 pan can hold a party pack of 12 brats easily.