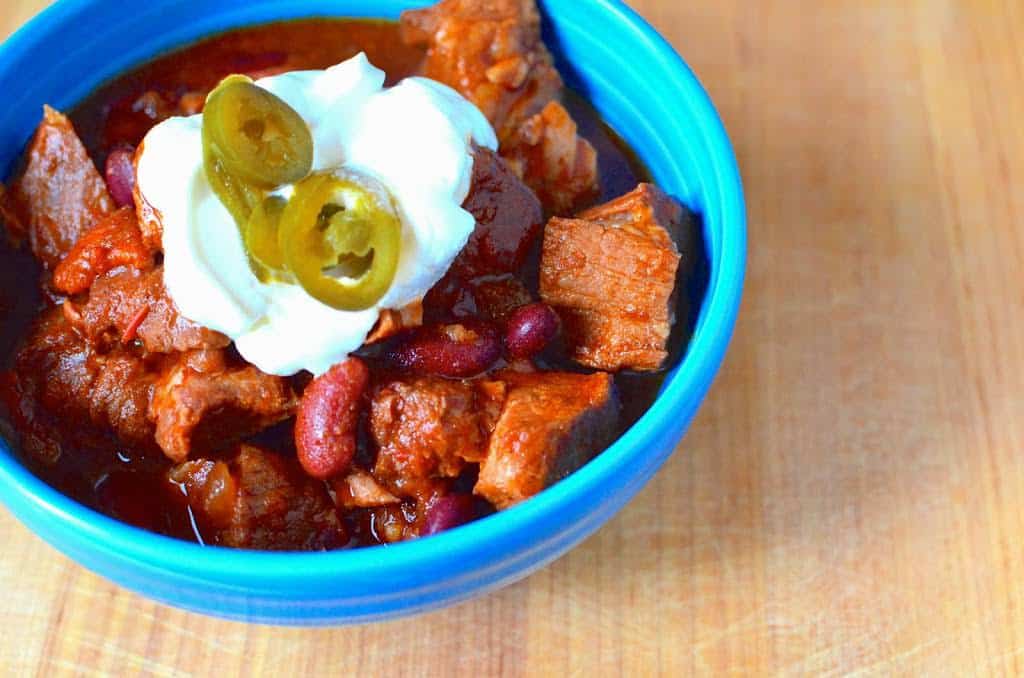 This post is sponsored by the National Pork Board as part of the Tailgating with Pork and Kroger Program. Score big at your next tailgate party with Kroger – from tailgating to backyard BBQs, game day gatherings with friends and family can be simply delicious with juicy, tender and versatile pork – the MVP of championship-worthy spreads this fall season. (And, if you’re looking to make this recipe, a little birdie told me Kroger will have a special on pork shoulder and blade roasts the week of October 6th…)
Don’t forget the giveaways, too: you have until Sunday to enter my Tailgating Party Kit giveaway, and the Tailgating with Pork and Kroger Pinterest contest has two more Kroger gift certificates to award.

Chili is my favorite thing to serve for the big game. I can finish it ahead of time, leave it simmering on the stove, and everyone can serve themselves and LEAVE ME ALONE I’M WATCHING THE GAME!Ahem.

As I was saying, chili is the perfect meal for entertaining a crowd. It gets better after sitting for a while. Making it early, even the day before, is the right thing to do. Then all you need to do is reheat it, and set out bowls, spoons, and napkins. Put out a bunch of add-ins so people can customize their bowl of chili – I always add sour cream, diced onions, and pickled jalapeños. And you’re ready to watch the BALL! BALL! FUMBLE! YES! No. Darn. Overturned on replay review.

Where was I? Oh, yes. You can watch the game while your guests serve themselves.

This is a big pot of chili. Ten pounds of pork shoulder, eight cans of beans. You’ll need your biggest pot for this one. My eight quart dutch oven is too small; I use the pot from my 12 quart pressure cooker (as a regular pot – it’s too full to come up to pressure). If you don’t have that big of a pot, split it across two pots, or cut the recipe in half, depending on the size of the crowd you’re feeding. If you do have a big of a pot with a thin bottom (like a pasta pot, or a granite ware canning pot), it will work. But…brown the pork and sauté the onions in a large frypan; they will burn on a thin bottom pot. Transfer everything to the big pot when it’s time to start simmering.
Someday I’ll own a Le Creuset 13 quart enameled cast iron dutch oven, just to hold chili for a crowd. It costs $500, and I’m not sure I can lift it, even when it’s empty. But, oh, do I want one. Someday…

Recipe: Pork Chili with Beans For a Crowd

1. Brown one batch of the pork

Put the pork in a large bowl, sprinkle the pork with 1 1/2 tablespoons kosher salt, and toss to coat. Heat the 2 tablespoons of oil in pot (or a large frypan if the pot has a thin bottom) until the oil is shimmering. Brown one batch of the pork – just enough to cover the bottom of the pot without crowding. Brown the pork on two sides, about 4 minutes per side. Remove the browned pork with a slotted spoon, leaving as much fat behind as possible, and put it back in the bowl with the uncooked pork. 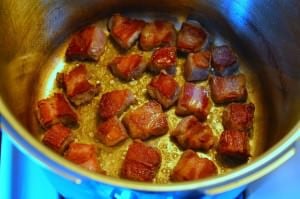 2. Saute the aromatics and toast the spices

Reduce the heat to medium and add the onions and 1 teaspoon kosher salt to the pot or frypan. Saute the onions until softened, about 5 minutes, scraping occasionally to release any browned pork bits or onions stuck to the bottom of the pot. Add the garlic and chipotle en adobo, and saute for one minute. Make a hole in the middle of the aromatics, and add the chili powder, cumin, coriander, oregano and brown sugar. Cook for one minute, or until fragrant, then stir the spices into the onions. Add the beer to the onions and spices, bring to a simmer, and simmer for one minute, scraping the bottom of the pot to release any browned onions.

If you were browning in a frypan, scrape the onions, spices, and beer into the big pot. Add the pork (and any juices in the bowl) to the pot, then stir in the chicken stock, tomatoes, and beans. Increase the heat to high and bring the chili to a simmer. Put the lid on the pot. If the big pot will fit in your oven, set the oven to 325°F, move the pot into the oven, and bake with the lid on for 2 hours. Remove the lid, and bake for another hour, 3 hours total in the oven. (If the pot won’t fit in the oven, simmer on the stovetop: reduce the heat to low and simmer the chili for 3 hours with the lid slightly ajar, scraping the bottom of the pot with a flat edged wooden spoon occasionally to keep the chili from scorching.) 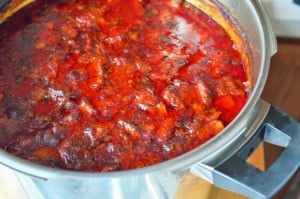 Remove the pot from the oven, Stir in the apple cider vinegar, then taste the chili and add more salt, pepper, and vinegar as necessary. Serve the chili straight up, or with diced onions, sour cream, shredded cheese, minced cilantro, hot sauce, tortilla chips, pickled jalapenos…whatever you like as toppings for your chili.