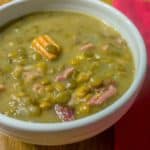 I’m the guest who haunts the kitchen after holiday dinner, saying “Wait! Don’t throw those bones away. I’ll take them with me.” (Yes, I’m a big hit at parties.)
I only do this to family members. Now, when they see me come into the kitchen, they shake their heads and dig under the counter for the gallon ziploc bags. They're family, so they have to invite me back, right?

Now, what do I do with those bones? In this case, I got a great hambone from my brother-in-law; I threw it in the freezer, saved it for a couple of weeks, then used it to make lentil and ham soup.

If there’s extra meat on the bone, I’m good to go; if not, I ask for a care package of leftover ham to dice and stir into the soup. (Which is a good idea in general, even with a meaty bone. But I’m usually pushing my luck asking for bones; I don’t want to get greedy.)

After that, soup is easy with my pressure cooker. Saute an onion and some garlic in the pot, then add the hambone, a pound of lentils, and water. When the beans are done, I pull out the bone, pick off the ham, and stir it back into the soup. Season to taste, add a splash of vinegar for a little acidity, and the soup is ready to serve.
No pressure cooker? No worries. See the notes section for stovetop instructions.

Pressure Cooker Lentil and Hambone soup. What do I do with a leftover hambone? Make soup, of course. Lentil soup in under an hour, thanks to my pressure cooker.

« Pressure Cooker Kielbasa and Sauerkraut
PicOfTheWeek: Flowers? For me? »