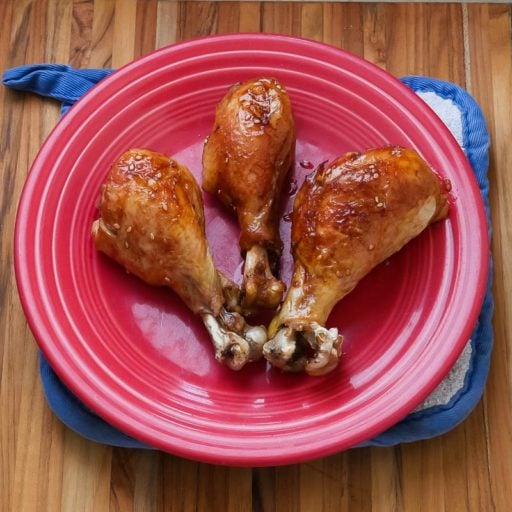 My grocery store had a sale on chicken drumsticks – and I think they were not the only store to do it. Last week, I got a wave of questions about pressure cooking drumsticks2Four questions in three days is a wave, right?. The questions came from two perspectives – half were asking if they could use my chicken wings recipe with drumsticks; the other half asked about my chicken legs recipe.

So, here we are in the middle – bigger than wings, smaller than legs, with a convenient handle to grab on to. I’m cooking the drumsticks like large chicken wings with a teriyaki glaze. (My oldest son is on a Teriyaki kick, so I went with Teriyaki drumsticks. Of course, he got himself invited out for pizza the night I made this recipe. Teenagers.)

There’s not much to this recipe – dump the drumsticks in the pot and pressure cook. The only tricky part is broiling the drumsticks. I broil them because it’s the quickest way to get them browned; they are kind of flabby when they come out of the pressure cooker, and need to crisp up. The tricky part is how variable broilers are. I’ve had wimpy broilers that can’t warm up a damp paper towel, and mega-powerful broilers that carbonize food the moment you take your eyes off of it. My current broiler is in the goldilocks zone, not to cold, not too hot. To even out the heat, and give myself some extra cushion, I put the rack down a few levels, in the middle of the oven. In that setting, the wings are nicely browned in about 10 minutes. Then I give them an extra coat of teriyaki and serve.

Looking for an easy substitute for chicken wings? Try out some pressure cooker chicken drumsticks.

Chicken wing style Teriyaki drumsticks from the pressure cooker…with a little help from the broiler.