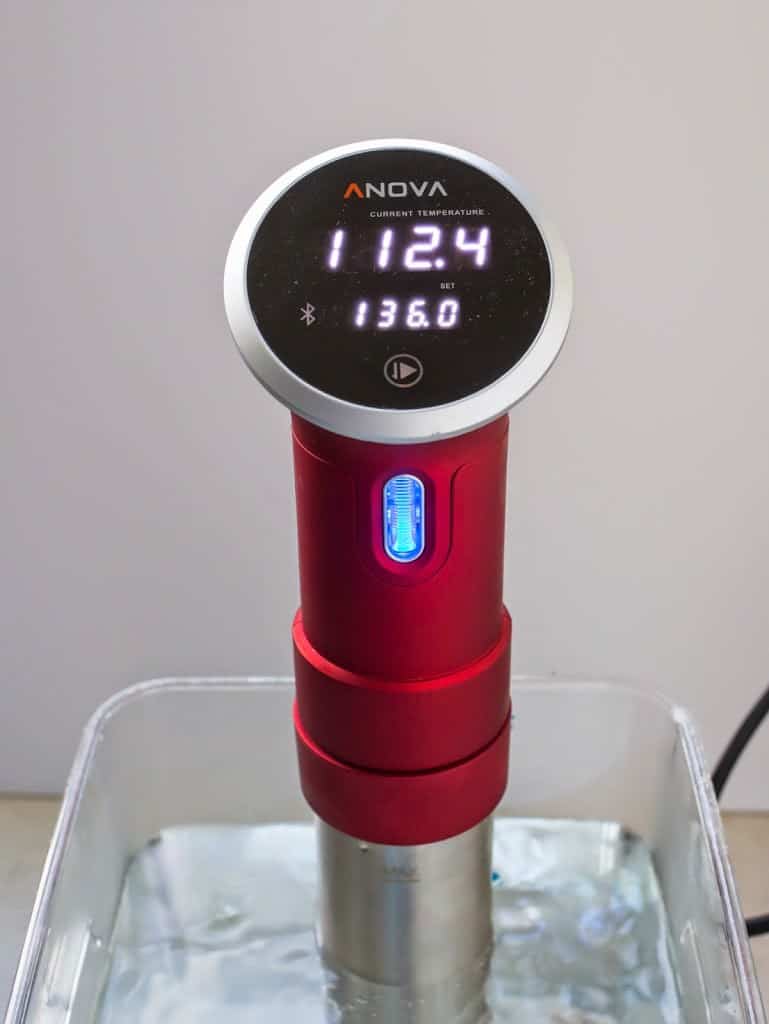 It was worth the wait. The Precision Cooker is light, compact, inexpensive ($179), and easy to use. The controls are simple - a temperature display, a touchscreen play button, and a glowing blue scroll wheel to adjust the temperature. (The play button acts as the control button for the other functions - press it for three seconds to switch between °F and °C; press it for eight seconds to turn on the timer mode). I love the simple interface - it’s obvious how to adjust the unit, and easy to get started. It also has an adjustable clamp; it slides up and down on the unit, so it will fit in a wide range of pots.

Is it perfect? Almost…but not entirely. Unlike the all-in-one SousVide Supreme unit, the Anova is just a water circulator. You have to provide a separate pot or food storage container to hold the water. It is not as precise as the PolyScience Professional Creative. The Anova would occasionally drift +/- of 0.1°F away from the target temperature; the PolyScience holds the temperature +/- 0.01°F.

Both of these are minor complaints; the Anova costs half as much as both of those units. Providing your own food storage container isn’t a big of a deal - if you have a pasta pot, you’re ready to go. And, plus or minus a tenth of a degree isn’t going to affect your sous vide cooking at all.

If you have dabbled with Beer Cooler Sous Vide, enjoyed a perfectly medium-rare steak (or three), and want to move up to a real immersion circulator at a low price, this is the unit to get. It’s a solid unit at a great price, and will keep you happily sous videing* for years. And, as a gadget geek, I can’t wait for them to come out with the bluetooth app, so I don’t have to get my lazy butt off the sofa can check on my sous vide from the living room.
Vieding is a word, right? No? How about “precision cooking for years” - sounds better.